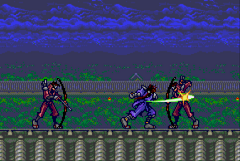 Kaze Kiri is a surprisingly experimental game. You would probably expect a single-plane beat-em-up with a ninja theme to play something like Ninja Warriors, but instead, it is determined to do almost nothing like other games. To finish a level, you have to first deplete a gauge that goes down as you kill enemies, then run to the other end; in a few instances, it’ll simply end there. There are 19 stages where most of its contemporaries have 5 to 7, though most of them are short, especially early on. You have 3 lives and no credits, but you can go to the options menu after a Game Over and restart from any level up to the one you died in. This is interesting because it can work either as infinite credits or as a way to help you practice for difficult parts if you want to beat it on just one, the way save states might be used today. Your healthbar refills constantly, but certain moves use it up, such as the projectiles you throw when you press the attack button from afar, Shinobi-style. Up close, a single press of the same button can result in up to three hits of your sword, depending on how long you hold it, and with a bit of practice, you can mix up singles, doubles and triples to create longer attack chains. 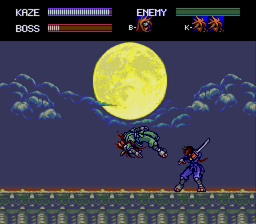 You also have an unusually varied moveset. You can somersault in either direction to both evade attacks and get near your opponent – if performed close enough, you will actually end up behind them. There’s a slide kick, a jumping dive kick, and throws. Where most games of its era have you tap a direction twice to run, Kaze Kiri has you holding up+forward. As it turns out, it makes it considerably easier to rush towards enemies or run away from them at the drop of a dime. In desperation, you can also disappear for a moment, though it costs a few too many health points to be really useful. There’s even an advanced technique; by pressing away immediately after performing a forward somersault, you can segue into a backwards slide as you land. Movement is rapid and the controls responsive, so that controlling Kaze is fun and instinctive, even though it’s odd that you can’t attack while running.

The problem with the game is that it does very little to take advantage of all the cool stuff its protagonist can do. There is essentially no level design; just short, flat areas where enemies spawn at random and disappear once they’re too far off-screen. Since most levels have a strong and a weak type, you spend most of your time running back and forth, killing the weak ones while avoiding the strong. In the early levels, this happens fast enough, but later on they start to fight extremely defensively, blocking three-quarters of your moves (while you can’t block!). You can still throw them, but it barely does any damage. This slows the game down to a frustrating pace, robbing you of even the satisfaction of a standard beat-’em-up. 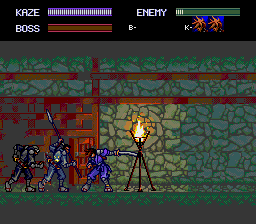 The boss battles are a little more interesting. Since most bosses are humans with powers comparable to yours, they almost feel like a VS fighter, but it’s far too easy to bully most bosses just by being fast and aggressive, with only a few towards the end requiring more care. Some of them are so incompetent that it’s no challenge at all to beat them without taking a single hit – in a game where your health refills gradually, no less.

After finishing the game once, you unlock a female ninja named Suzu, who looks suspiciously like Kaze’s had a change of clothes. She’s faster, weaker, and shares all his moves. A two-player mode might have made up for the over-defensive foes – after all, they can’t block from both sides at once – but there is unfortunately none to be found. 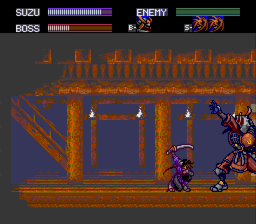 As with most action games of its era, the story’s an afterthought: a princess was kidnapped by ninjas at the service of an evil Lord, and the good ninja Kaze is sent to rescue her from the Lord’s castle. It’s basically Mario, except there isn’t Another Castle. It’s a beautiful afterthought, at least; the intro is colorful and stylish in the way only a (barely-animated) early ’90s anime intro can be. There are two endings; in the next-to-last battle, the princess stands around at the right of the screen, and if you hit her three times (accidentally or not), she dies, triggering the bad ending. Otherwise, you get her back, and flee the crumbling enemy castle by stealing a ninja’s hang-glider in mid-air while your rivals look up from below. 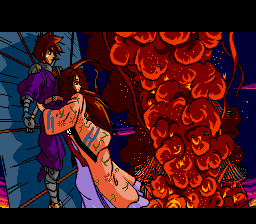 Midway through the game, there’s another little scene showing your ninja scaling the castle’s outer walls, this time through in-game graphics. It’s too bad there aren’t others like it, as the animation is quite impressive. Otherwise the visuals are more of a mixed bag. The sprites are well-drawn and animated, but seem a bit small considering there’s rarely anything going on with the top half of the screen. While the night-time exteriors are nice, the levels taking place inside are mostly plain and grainy. The setting does lend the game a sense of style, though – painted paper walls and flaming Japanese castles can never not look cool.

The music is generally decent, with reasonably rousing themes that nonetheless fail to really stand out among other uptempo, synth-based PCE-CD soundtracks. It doesn’t help that it’s mixed too low compared to the sound effects, so that you don’t notice it as much as you should. 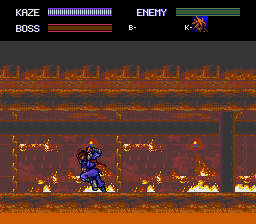 Among PC Engine fans, Kaze Kiri is known primarily as an expensive collector’s item. It was released in 1994 as the market for the system was dying, and presumably few copies were printed. Though Naxat Soft was a prolific developer / publisher and one of the PC Engine’s biggest supporter, a look at the credits reveals that the team behind Kaze Kiri was exceptionally small, which may help explain some of its shortcomings.