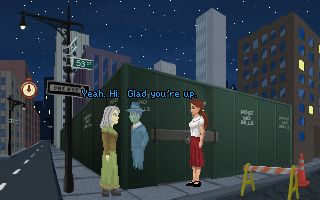 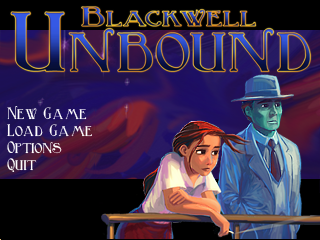 The content of Blackwell Unbound was originally conceived as a series of flashbacks to occur sporadically throughout Convergence, but Gilbert’s ambition proved too broad and took too much time, so Convergence was pushed back and the flashbacks turned into a standalone prequel to the rest of the series. It’s the 1970s and players are put in the shoes of Rosa’s aunt, Lauren Blackwell. True to the Blackwell name, Lauren is a deadpan sarcastic redhead. Unlike Rosa, she has trodden the path of the medium for a while now, and is more bitter and guarded as a result, a more tragic character in some ways. Lauren is a more difficult protagonist than Rosa, easy to like but harder to understand. She isn’t immediately identifiable like Rosa, more self-destructive and addictive. She keeps her thoughts and feelings to herself, to the point where even the player isn’t completely sure why she’s acting the way she is. She is a heavy smoker and will even pull out a cigarette and take a few puffs as an idle animation.

At the outset of the game, Lauren and Joey have spent all night tracking leads for more spooks, every one of them dead ends. They have two more suspicious items to cross off their list before they can rest, and of course both of these leads turn up real spooks. Lauren and Joey prepare themselves for a long, if usual, night of sending ghosts to the afterlife. That is until a crazy old bat calling herself the Countess starts showing up… 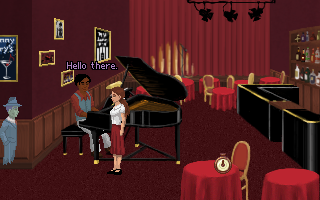 Starting in the midst of Lauren and Joey’s partnership, opposed to the beginning of Rosa and Joey’s as in Legacy, allows for their dialogue to brim with bickering. Like an old married couple, Lauren and Joey can act resentful of each other on the surface but show numerous signs of caring deeply for each other. Lauren is a wonderful protagonist and, compared to Rosa in Legacy, an even better foil to Joey. Dani Marco’s low, sultry voice acting pairs perfectly with the character.

There are two ghost stories in Unbound: One concerns the tragic history of a jazz trio and the other concerns a kooky woman with an obsessive attachment to her apartment. Their stories are well told and tastefully bittersweet. Unbound‘s ghosts are some of the most memorable of the whole series. The tragedy of their stories is already set in place with their unrestful souls, and they unfold beautifully from there.

Gilbert also incorporates the stories of real life individuals, Joseph Mitchell and Joe Gould in particular, into the story. Joseph Mitchell was a reporter who often wrote short biographies of NYC eccentrics, most notably Joe Gould, a bohemian who claimed to be working on an Oral History of the World, though he mostly just drank and pretended to recite poetry in a seagull language. Mysteriously, after writing his expose on Gould, Joe Gould’s Secret, Mitchell stopped writing altogether. He went to his office from 1964 till he died in 1996 but never published another significant piece of writing again. The fact weaves seamlessly with the fiction and becomes an integral part of the series’ overall story arc.

Gameplay is mostly the same as in Legacy, with some alterations. The most apparent is that it is now possible to switch between the two characters, which would become a staple of the series. This is a welcome addition, since Joey tended to just float around uselessly in Legacy. And since the game is set in the 1970s, Lauren will make use of the phone book and newspapers instead of the internet. All puzzles that involve looking up information must now be typed in manually as opposed to the preset options of Legacy. The manual typing was used in The Shivah, and apparently fans complained about its absence in The Blackwell Legacy, so it was brought back to stay through the rest of the series. 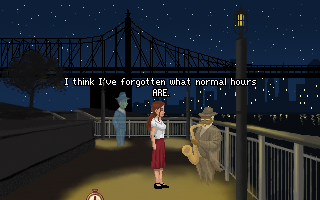 Gilbert decided to go with a minimalist approach to make it faster to develop and give the fans something to chew on before Convergence. As a result, there are no character portraits. Instead the characters themselves speak and the graphics are close up enough that you can see their facial expressions. The background art is by Erin Robinson, creator of Puzzle Bots. Her work is all lovely, illustrating several lonely nighttime scenes with an Edward Hopper vibe, featuring interesting cinematographic angles and memorable locations, from promenade to jazz bar to abandoned construction site.

Thomas Regin composed the first of his Blackwell soundtracks for Unbound. Here, with his gorgeous saxophone and moody film noir jazz, he sets the series’ atmosphere in the right direction: moodier, darker, and bluesier.