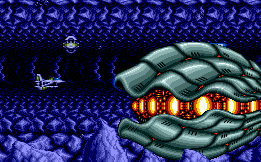 The shoot-em-up genre was well established in 1990, with an already rich background to draw from. Arcades were the technological vanguard and consoles were still judged by the quality of arcade ports; significantly, the Mega Drive was powerful and still trying to make a name for itself despite launching two years earlier. In this context, Gaiares is significant, not only for pushing the shoot-em-up genre, but as a home system exclusive and a Mega Drive/Genesis exclusive. 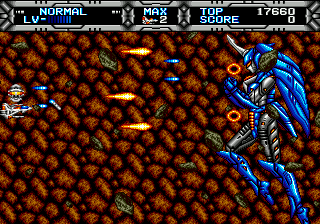 Developed by Telenet, the game was primarily the work of two people, programmer Masayasu Yamamoto, plus graphics and game designer Kouji Yokota. Both men had respectable portfolios and experience, though this was Yokota’s first project as the primary lead designer – previously he’d only done graphics at both Telenet and Falcom.

Mechanically Gaiares draws from Konami’s Gradius, with a diverse weapons system players can select at different times; Irem’s R-Type, by having an always present Option module that acts as both weapon and partial shield; and maybe a tiny bit of Taito’s Darius in terms of branching paths and one notable aquatic boss, and maybe Technosoft’s Thunder Force series too. It also liberally borrows stage themes from all of them, including blasting a path through obstructing scenery and penetrating the bay doors of giant spaceships. The branching paths are also subtly implemented, requiring only that you move to the top of bottom of the screen, and make replays less tiresome. For example on Stage 1, before the mid-boss, you travel along the top of a foliage covered asteroid, taking out ground targets, or fly beneath it while avoiding falling debris. The same occurs in the castle stage, and the space station; different paths resulting in different scenery, enemies, and environmental dangers.

The main attraction though is the weapons system and your TOZ (WOZ in Japanese) Option module, which allows you to steal and then power up the weapons used by enemies: fire your TOZ like you might in R-Type, but instead of destroying enemies it latches on, giving you their abilities.

There’s a deliciously parasitic nature to the TOZ, sort of how H.R. Geiger’s facehuggers latch on to other life forms and adopt their characteristics for the resulting alien, so as to be optimally suited to that environment. The enemies are placed such that whatever weapon they have is usually pretty good for that situation. It’s an impressive invention for someone who’d previously mainly done pixel art. There are 13 different weapons to capture, plus the TOZ’s independently fired missiles, for a total of 14. Players finding the game too difficult can access a hidden and devastatingly powerful homing weapon, the T-Blaster, by firing the TOZ six times and missing, then capturing a weaponised enemy on the seventh attempt – firing from the screen’s rightmost edge makes this easier. (Be warned, it’s fairly useless for clearing a path through Stage 2’s ice network.)

Of course, beyond the weapon system, the main reason for Gaiares’ notoriety is its infamous difficulty. It’s one of the tougher shoot-em-ups, but in a totally different way to – for example – Cave or danmaku shooters. There are several overlapping factors. Firstly, enemy locations and firing patterns are not fixed but based upon player position, meaning the game constantly adapts and is almost procedurally generated. You can’t simply memorize their locations, you need to be ready to adapt with them. In conjunction with this, speed changing is essential. Some shoot-em-ups might offer three or even five different speed gears, but you can probably finish the game on the Medium setting – this is absolutely not the case with Gaiares, especially for bosses. Judicious use of the Slow and Max speeds is essential. As expected, the right weapon choice is also important, requiring players reach higher levels and deduce what’s best for subsequent replays after dying. Unfortunately Gaiares adopts a rather cruel checkpoint system, often placing you in a dangerous situation without chance to power-up. That being said, Gaiares is not impossible, it just needs practice and determination. The bosses are pretty good at telegraphing their attacks: for example, the mermaid boss’s wave attack happens only after her arm is outstretched. 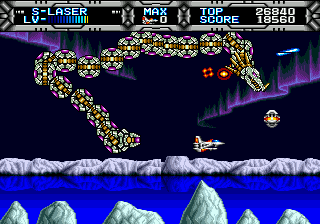 The need to strategize for the perfect ship position when triggering enemies, optimal ship speed, and correct weapon selection, lends Gaiares an almost puzzle-like quality. Rest assured that as a newcomer you will use all your continues fairly quickly. So it’s just as well the music is fantastic, because you’re going to be hearing it a lot. The musician, Shinobu Ogawa, worked on multiple installments of Telenet’s Exile and Valis games, and generally his entire music portfolio is excellent.

Perhaps the high difficulty was a blessing though. The game starts well, with hundreds of moving objects on screen, smooth vertical and horizontal multi-scrolling, parallax scrolling, lots of speed with seemingly no slowdown, massive bosses, rocking music, it hits all the right buttons. Until you reach the final two stages, where the game basically rehashes everything that’s come before to create a cheap and uninteresting boss rush.

In some ways it’s also quite an odd shooter. Starting with the name, Gaiares, which isn’t obvious to pronounce. The Western promotional material even featured the slogan: Can you say “Guy-Are-Us”. Wikipedia incorrectly states this is a portmanteau of “Gaia Rescue”, but according to Kouji Yokota, it’s actually a case of reverse Engrish: it’s supposed to be “Gaia-less”, as in “without Gaia” or “Earthless”, since the planet had been ruined. The game also has an unprecedented ten minutes of anime cutscenes. There’s over seven minutes for the intro, and over two minutes for the ending, which is insane for a cartridge-based shooter in 1990. You control a pilot named Dan Dare (Dias in Japanese) as he fights a terrorist group named Gulfer. If they succeed, then humanity will be granted a new planet to inhabit. The TOZ is piloted by a woman named Alexis (Luanne), an alien from the Leezaluth Empire, who has brainwashed herself to fight alongside the humans. There’s also the Leezaluth queen Natasha (Ludianasa), who’s featured nude on the Japanese cover, as well as the evil queen Zz Badnasty (boringly called Zelduon in Japanese). 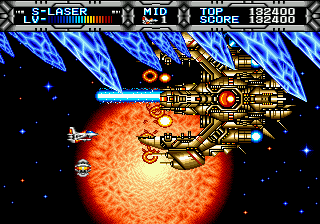 There’s lots of content to wring out of Gaiares. It looks good, sounds good, and has plenty of innovative ideas which still hold up. It has all of the marks of a proper classic Genesis shooter, and is still a fantastic game, as long as you’re fine with the difficulty level.

Starting his career at Telenet as a pixel artist, Kouji Yokota worked on the Famicom Valis and also the original Megami Tensei for MSX. He later worked at Falcom doing the art and helping with level layouts for Ys III. His highest profile games came later, acting as designer on Lunar: Eternal Blue, artist on ActRaiser and Soul Blazer, then further design on Illusion of Gaia and Granstream Saga. 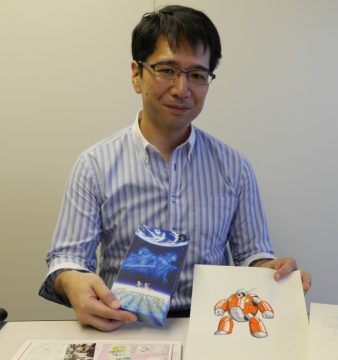 On the conception of Gaiares: “Sega launched the Mega Drive and requested Telenet come up with a game. One of my former programming colleagues came to me saying he had to work on this shooting game and the deadline was coming up, and that’s how I got involved. It was a very small project, only involving a small number of people. Initially there was only two of us. At that time we had a lot of freedom, we could do whatever we wanted.”

On the weapon capture system: “It didn’t exist before – capturing directly from enemies. The idea was to evolve the way one used the Option module from R-Type. You apply it to an enemy to extract that enemy’s individual characteristics. Originally we had a weapon where you shoot an object, like a ball, at the power-up items to collect them, and also switching weapons in real-time. But then we came up with the Option idea, and that led to the idea of ramming enemies to capture weapons. If you’re trying to capture something from the enemy you cannot attack them, so we designed it as a sort of risk/reward mechanic for the player.”

On the difficulty level: “I was only involved in the first six stages, and I was not involved in the last few. You can probably tell if you play the game, but there is a significant change in the bosses. The last few stages were mainly done by Yamamoto-san and a designer at Nihon Telenet. It seems as though they recycled some of the monsters, which was criticized and ultimately led to the game receiving lower review scores.”

On the Title: I came up with the name – ガイアレス. The resu (レス) part stands for L-E-S-S – or less, as in to be without. So without Gaia, or Earthless, since Earth has been ruined, and humanity is trying to figure out a solution. I was only in charge of coming up with the basic setting. I placed importance on the game itself, and I didn’t think much about the story. Perhaps it’s because the characters are reviving the Earth, so that’s why English players thought the “res” stood for “rescue”, as opposed to “less”.

On the cutscenes: The memory was size was doubled from 4 megabits to 8 megabits after we started the project, so we added the 4mb equivalent of story and visuals afterwards.

On the difficulty: “Yamamoto-san, the programmer, was in charge of the game balance, but it was originally intended for the overseas market. Since there’s a tendency to play a game and then sell it, as well as rental systems, the overseas publisher, Renovation, asked us to make the game more difficult so it would not be rented and completed easily. When we went over to show them the demo they said, ‘You should make it even more difficult!’ We started getting concerned at this point, but we complied. So ultimately the game became very difficult.”