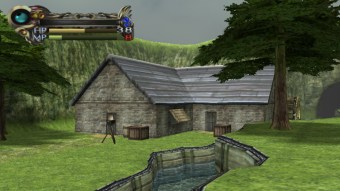 Even as early in the PS2’s life as Summer 2000, From Software had a not inconsiderable line-up of games ready. Along with Armored Core 2, and the ponderous RPG Evergrace, they pushed out Eternal Ring in the same year. It was released on March 4, 2000, before any of From’s other PlayStation 2 games. It would be encouraging, knowing that once again their first release for the new PlayStation console was a dungeon crawler, just as before with King’s Field on the original PlayStation. It would be, if Eternal Ring was half the game its illustrious forebear was. A third sounds more accurate: Eternal Ring is a very short game. 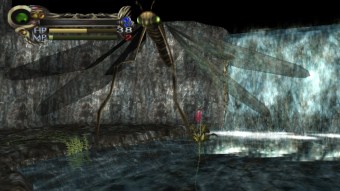 The Elders have sent troops to the Island of No Return! The king believes that disloyalty may be afoot and, as Cain Morgan, and you are sent to the Island of No Return to investigate. If this is your first experience of the King’s Fieldseries, then it may perhaps be a decent place to start: a few moments walk ahead and to your left is, already, a save point. Continuing on a little further, you will meet your first enemy, a Cthulhu-esque walking lizard. And shockingly enough, he won’t kill you in three hits.

Combat, armour, and items all work the same way as in the King’s Field series, with the notable exception of no “power” gauges for HP or MP. Where Eternal Ring’s gameplay departs from them is in its magic system. In order to use magic, you must use rings. You can find them here and there, but mostly you’ll have to create them. There are five types of ring in the game, though not all of them can be created:

Attribution: These grant affect statistics e.g. strength, defenses, element power (which we shall come to shortly). A base Magic Ring is not required for the creation of Attribution rings, and once made they cannot then be used to form another ring. 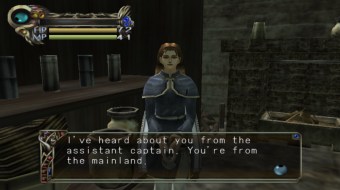 There are many coloredFirst Pe Gems scattered around the island, each of which carry certain elemental properties: the usual Earth, Wind, Flame and Water, as well as Light and Dark types. These have their own “levels” and are essential for creating certain types of ring, though this process is rather more elaborate than is possible for us to cover here. You cannot initially create rings but when you eventually find a teleport, it will take you to a magician whom will impart the knowledge required.

It’s an interesting system, but because the game is so short you won’t have much time to make many rings! Certain reviews of the game argued that it seemed rushed, and despite some excellent levels to trudge around in, the lack of much in the way to explore only reinforces this.

The game also betrays its age with some slightly less polished visuals when compared to King’s Field IV, but more prominently no analogue controller support. It helps immensely with any of the King’s Field games, and at least emulation allows its use with the PSX games. You can rig controller settings in PCSX2 to allow the analogue sticks, but played on a real PS2 they do nothing at all. More evidence of rushed development?

Eternal Ring is widely distributed, cheap and easy to find.