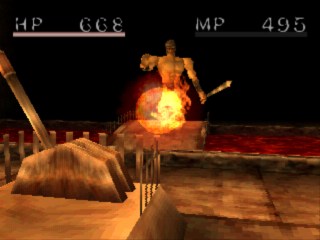 You are mercenary Ruus Hardy, visiting his grandmother on his way to the Holy Land of Zepter. Instead he meets the horror of a town reduced to ash and ruin. A monk mistakes Ruus for the Earl of Marus and proceeds to explain how the souls of the townsfolk were consumed by the evils within the realms beneath the tower. Conveniently, the monk endows Ruus with an ancient short sword and directs him towards the hole in the town, beneath which lies the tower and the many horrors it conceals…

An off-shoot of King’s Field and not an official sequel, Shadow Tower hints in its title at the sort of places that you’ll visit while playing, and true enough, the first room contains some precariously-placed (and somehow floating magically) stone steps above an endless drop. Directly ahead is a corridor that takes you to the first room, and your first enemies. Shadow Tower wastes no time in continuing where King’s Field left off and it also wastes no time in revealing its differences. 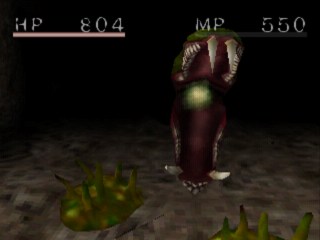 The level design is tremendously restrictive and claustrophobic, and the player will progress through the game in a semi-linear fashion. Levels in Shadow Tower harken back to the first King’s Field, and the abstract nature of Ultima Underworld‘s square rooms branching off one another. But there’s a LOT of it in the opening few hours of the game, and it’s only once the player has passed through the Human World and Earth World that they will reach the Fire World and – at last – the designs somewhat break out of the room-corridor-room-corridor mentality and start offering something different. … Okay the Phoenix cavern has a fun “two sides across a lava stream” structure, but then it’s back to the usual collection of rooms and corridors soon after! Argh, what was I saying? Oh yes, something about From Software losing their touch?

There’s no denying the game’s dark, oppressive atmosphere: there isn’t even any music! Seriously, none at all. I’m not sure if that was intentional or they just couldn’t be bothered. There’s no leveling up, either, Shadow Tower wants you to earn better weapons to wield and armour to wear, if you want to take on the badder baddies. Talking of which, weapons and armor slots are plentiful, as with King’s Field. Bows have infinite ammo this time, which is a surprisingly alleviating choice considering how hardcore From Software tend to be in their gameplay designs. 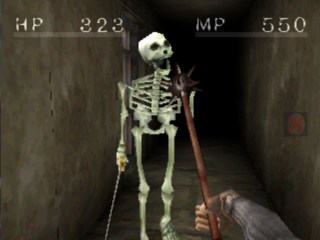 From finally “fixed” the floatiness of the combat with a sound-effect playing as you hit an enemy. It is often a moan or groan, rather than a clashing sword, but it does “hit” as you connect with your weapon, which is a pretty hefty improvement. Unfortunately with this step forward, From Software took a few steps back. Unlike King’s Field, in Shadow Tower you must be standing right up against an enemy to connect your attacks. Further, said enemy must also be somewhere within the central area of the screen, otherwise you will not strike them. Perhaps this adds a dose of realism, but in what is ultimately a rather frustrating adventure, such tweaks are less than welcome.

Weapons and armor degrade over time and with usage. It’s always frustrating to see that “item nearly breaking” symbol on screen in the middle of a battle. The only way to overcome this involves backtracking to find weapon repair shops, which are – oh so conveniently – sporadically placed. This is awkward and halts player progress, particularly when you’re about to face a boss and – rummaging through your by-now-copious inventory – all your weapons have near-zero durability. How does our hero carry all that stuff anyway? A few hours into the game you’ll find yourself hoarding a selection of around 13 pieces of armour, perhaps 17 or more weapons, and an assortment of wounds from the usual array of monsters slashing at you while you’re looking the other way (but trying desperately not to while your controller’s D-pad cries at you).

Magic is rather different in Shadow Tower. It relies mostly on equipping rings – one for each hand – and then also equipping a magic for each hand. The player then has to initiate the magic by pressing two buttons. Here’s another odd and frustrating decision, though it’s a cool feature to equip multiple magics, when you’re desperately side-strafing to avoid an angry golem bearing down on you, fumbling to press Circle and then Square (left hand) or Triangle (right hand) to cast is neither particularly intuitive, easy or immediate. 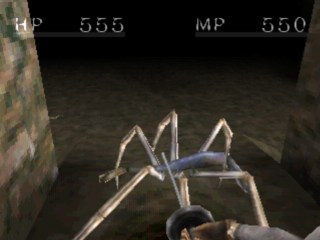 To be fair, Shadow Tower has a variety of enemies that go beyond the usual skeleton / slime / ogre / grue fare. Poisonous undead hanging from the ceiling, spitting toxic slime at you. Outlandish and very deadly fauna that shoot laser beams from their “eyes”. Slothly half-slime-half-ogre monstrosities and a ton more, in fact 150 according to the game’s “Creature Book”: a nifty feature which indexes all of the enemies in the game. As you meet new monsters, more are added to the book, and it’s possible to read up on fairly verbose statistics and information about each one…

… when you’re not fending off projectiles from the direction of “pitch darkness.” The draw distance is woeful. It is even shorter than the first King’s Field and, while it does also prove effective in imparting severe claustrophobia in the player, it’s frankly bloody annoying in 2011 playing a first person game where you can just about see two meters in front of you but no further! One begins to appreciate the open spaces of the second and third King’s Field game at this point, though here there are somewhat more detailed textures and – shock, horror – shaped walls! Well, occasionally. The usual straight, boxy walls in most places, but you’ll also progress through rather low-poly caves every so often. Oh, and for a 1999 PlayStation game, the amount of edge holes is pitiful. They are persistant and copious. I’m aware that some of this is down to the PSX itself, but there is rarely a moment where you can’t see them. I’m no visual fanatic, but it’s somewhat disappointing.

And as a whole, so is the game really. To call Shadow Tower a mixed bag would be polite. To accuse it of being flawed would be accurate. It isn’t difficult to appreciate the hardcore gameplay of King’s Field as the game isn’t insulting you, it’s hard on purpose: it wants you to work for those levels and herbs! It understands that through tougher gameplay, rewards feel more satisfying. But this is not the case in Shadow Tower, where every few hits something in your inventory will begin to break and bring you closer to yet another required trudge back to the “nearest” item repair shop. Four worlds ago. Through two one-way drops. And your D-pad up button will weep openly.

So let us call it atmospheric yet frustrating, with some poor design decisions, and leave it at that.

There was no European release. 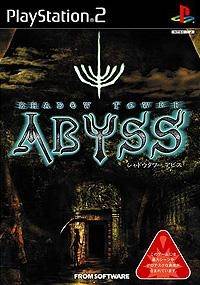 The sequel, Shadow Tower Abyss, is a tremendously dark first-person horror dungeon crawl preceding the likes of Penumbra. This was nearly fully translated but Sony in their infinite “wisdom” claimed that there wasn’t a big enough market for the game, hence no Western release. A fan-translation is in progress by John “Weissvulf” Osborne, but no updates given recently. It was the last first-person RPG by From Software. 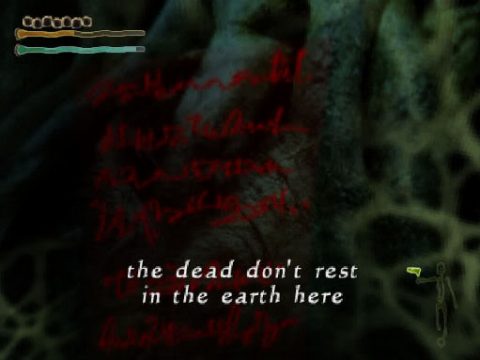