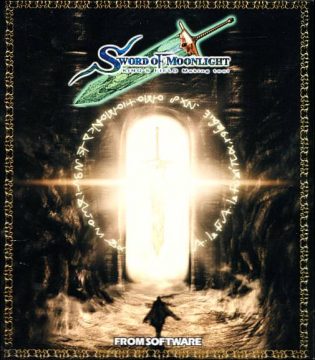 Released in 2000 (From Software’s site states March 16th specifically), Sword of Moonlight is a collection of various Windows utilities that allow the user to create a “King’s Field game”. Broadly speaking it is capable of creating something comparable to the first King’s Field but with some major improvements, the games work quite easily on modern systems, and even seem to work with 16:9 and 16:10 screen resolutions with no tweaks and only a few minor issues.

Finding concrete information about the development of SoM is pretty much impossible outside of the fan-forums. But post-release it becomes a little easier: evidence floating around the internet suggest that until 2009 it was impossible to find, but around mid-April of that year it began to circulate around the ‘net on many sites. Since then it has become almost completely translated by the very talented John Osborne. Keep in mind this isn’t just a game, but a game engine able to play completely customizable content, a variety of separate utilities that do different tasks, and a lot of pre-made content (which might explain the 9,280 Yen asking price). Not a small task!

A copious array of in-depth instructions and tutorials can be found over at http://www.swordofmoonlight.com which you should consult if you have any interest in actually using the software. There are various smaller utilities to deal with setting up textures, monsters, “level prefabs” etc – because those of you talented enough with image editors or 3D modelling will certainly be able to create your own content – then of course there are the larger tools.

“SOM-EDIT” is the primary tool. Within it are various sections, the first of which is the “parameter editor”. This allows the user to create a large array of completely customizable items, shops, player magic (offensive and defensive), “objects” (placement of furniture, barrels, and any other objects you like can be done with a fair amount of control over their position), enemies and non-player characters.

The “system editor” is where one can get really deeply into tweaking of item stats (sword slash strengths, effectiveness of healing items, keys etc), magic types, the basic stats of the player, their classes, the overarching list of levels and their maps, setting AVI files for special occasions, music (MIDI and .WAV but no MP3) and much more.

The main draw, though, is the map editor. Tile-based, and prefab-based, it is sadly limited to 1024 prefabs. But they can be rotated by 90, 180 and 270 degrees (for example so that one prefab is enough to create a square room). Each tile can be raised and lowered in steps, and there are prefab parts that are sloped to accommodate for this. The mouse operation is simple but rather too simple, and prefab placement involves clicking a prefab, placing it, right-clicking to rotate as needed, and clicking again to place more of the same prefab. Usable enough, but the moment you wish to use another prefab, you have to move over and begin the process again. Allowing the use of hot-keys to switch between commonly-used prefabs would have been nice! The same editor then allows you to place objects, NPCs, enemies and items – as previously created in other tools – wherever you like.

But while it’s all very well talking about the tools themselves, what about the games it creates? Well, there is no possibility for mouselook. You could redefine your movement keys if you wanted, but even though this is on PC the gamepad will be your friend here. Texture quality is decent artistically, but the engine is limited to 256×256 pixels per texture, and it looks very washed out as a result. Fans are extending the engine with some newer DirectX features, but you certainly won’t see colored lighting, shaders or any such fanciness as it is. Think Quake 2 era visuals, at best.

That wouldn’t matter if the gameplay itself was up to snuff, and sadly it just isn’t quite there. It seems From Software were a bit lazy with the most crucial aspect: the combat. AI is slow, ponderous. You can easily time a step forward, attack, step back pattern and do this endlessly until most enemies are downed easily. Perhaps when designing games, making enemies faster will add some challenge, but this and the lack of decent sound effects for attacks – and again no “weapon connecting” effect – creates for the same floaty combat as in the first game. But somehow even less satisfying. Otherwise, it plays like King’s Field. Just about.

On a technical note, despite the ease of getting the final games to work it can be difficult to get the TOOLS to work 100% on modern systems with users observing crashes and missing graphics. I have personally observed that the tools work quite well under Virtualbox and Windows XP with the “DirectX acceleration” slider moved to the middle to avoid errors when testing or playing games. This was on a mac too: both the game engine and the tools all work under WINE, though not perfectly.

The cynical would suggest that Sword of Moonlight was created because From Software knew they weren’t going to bother with the King’s Field series in future. It probably also helped to net From Software some more sales from desperate fans. A boxed copy of SoM is nearly impossible to find in the West, and you’ll have to trawl Japanese auction sites if you actually wish to own a copy.

There are some full-length fan-games out there, including Trismegistus and Diadem of Mounstraut by Tom Eversole, and unofficial fan-pre-sequel King’s Field: Dark Destiny by DMP Design. Sword of Moonlight also came featured with a full game, a ground-up remake of the first King’s Field by From Software themselves. It’s absolutely worth diving into the data files if you wish to know more about the engine, but it doesn’t necessarily play any better than the PS1 original.