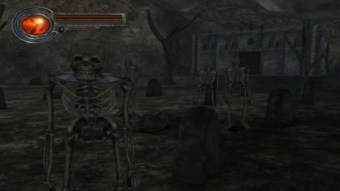 Stepping into the shoes of Prince Devian of the Azalin Empire, you are tasked to return the cursed Idol of Sorrow to its place of origin, so that your king shall no longer suffer its evil effects. With not a bang nor a shout, nor a particularly over-zealous CG intro, you begin the last entry in the King’s Field series at the entrance to the dark lands surrounding the supposed site of The Ancient City, from whence the evil idol came.

And once again, if you take two steps in the wrong direction, you will die immediately.

Don’t worry, we all do on the first playthrough.

King’s Field has always enjoyed a particularly subdued atmosphere, as games go. And the fourth game is no exception. Beautifully rendered terrain, ruined architecture, paths winding through precipitously high mountains, and – of course – dungeons. But after one goes through the – practically required – opening ritual of instant death when first playing King’s Field 4, it becomes immediately apparent that From Software were firing on all cylinders with this game. 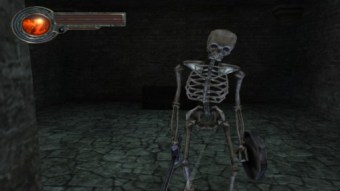 Eternal Ring preceded King’s Field 4 with somewhat lesser visuals, but it is assumed that it uses the same engine though definitely with improvements, including a persistent world and no loading times. Unlike many supposedly realistic PlayStation 2 games that have since become unbearable to look at in the wake of newer consoles, the textures in King’s Field 4 are appropriate and colourful, and certainly more artistic than realistic which works very much in the game’s favour. Deep greens on grassy ground, soft shades of grey in the ruins, somewhat luminescent blues in the catacombs, and strong yellows and browns in the caverns and dungeons.

NPC models are improved, though they still have no eyes! Enemies are now far more fleshed out, and more varied in their design. Once again the flytraps make a return, looking far more threatening in their dark green livery. Character and enemy animation still seems a touch slow and stodgy, but certainly superior to the previous games. Level design, too, is at its peak here: the game loves to mix things up, and will happily make you trudge through green valleys one moment, battle-scarred ruins the next, then through tunnels, chambers, underground caves and lots more. It seems much love and care was taken with every inch of the game world.

The HUD is rather different this time, following Eternal Ring‘s lead: No numbers, merely a few colored bars and a circle of red to denote the usual player attributes such as health, attack and magic power, and magic points. It allows for more space on the display for the player to take in the lush gameworld, but it can be a little difficult seeing even roughly how much MP one has left. 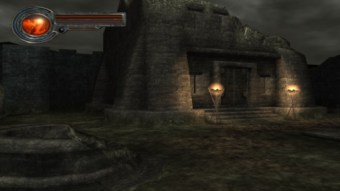 Menus are similar to previous games, with text selections down the left, and a box of stats and settings down the right. The equipment section has finally received a much-needed overhaul though, and a visual representation of what Price Devian is currently wearing is displayed as you flip through the usual round of weapon / magic / head armour / chest armour / etc.

Composed by Tsukasa Saitou, the music is a unique concoction of orchestral instrumentation mixed with synths and other keys, playing in twisted modes and triplets, and benefits greatly from the PlayStation 2’s abilities. A notable example is the opening piece “Healing Temple” – feature some prominent kick drums, set to a plinking synth playing a descending triplet motif, against an ascending string bass. The soundtrack compliments the game well, with its subtle creepiness. Some of the later pieces return to a more generic “game orchestra” similar to that of King’s Field 3, though.

And it goes without saying that the sound effects are dramatically improved, thanks to the PlayStation 2’s superior capabilities to its venerable predecessor. Enemies howl, moan, screech as you slash, smash and stab your way through them. And finally there is a sound effect when you make contact with an enemy! If there could be one major objective complaint of the combat in previous games, is that they suffered from a distinct floatiness due to this lack of audio feedback when making physical contact with an enemy. Here swords slash, axes thud, and maces crash into enemies with grit and depth. Suffice to say that the combat is quite satisfying in KF4. 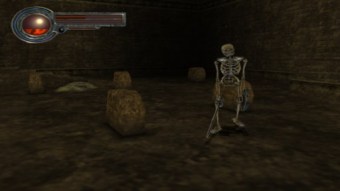 You will spend most of the game, as before, exploring and picking up items. There is less of a reliance on keys this time, and more on finishing tasks such as collecting a special item to heal a dying woman, or receiving a specific type of magic to allow access to a sealed door. Further into the game there are somewhat more elaborate puzzles, and much more walking around between places to achieve things rather than just progressing to the next part that you haven’t explored yet.

You’ll want to keep a lot of the things you find, too. Whereas armour you pick up will gradually be replaced with newer and better pieces as you progress, King’s Field 4 still makes judicious use of the Slash, Stab and Slice statistics which means that – while you could just use the spiked mace for a lot of the game – some enemies are weaker against certain types of attack. Here, again, is the crux of the combat in the King’s Field series, and it’s pleasing to see that From Software continued this in King’s Field 4. Magic functions the same way as before, though.

Another small improvement is that the player must now use certain weapons to break barrels and boxes to receive their contents, as opposed to simply “using” them.

It’s a shame then that there are two big negatives: it’s shorter than the other three, with it maybe lasting around 20 hours on the in-game timer. What there is of it is beautiful, a quietly charnel journey that is unmatched by any console RPG outside of Shadow Tower Abyss. But there is a definite air of barely-tangible sadness to the game itself, and to its release. 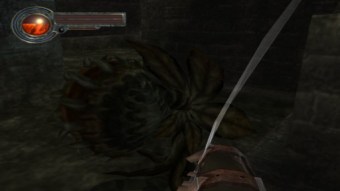 That isn’t the biggest issue though, and this kills the experience for many gamers: Prince Devian takes the best part of ten seconds to do a 360 degree turn. Imagine it, the previous games had fairly slow player character turning circles, but in King’s Field 4 the odd decision was made to lumber Devian with an even slower one! He runs about as fast the the player could walk in the previous games, which isn’t particularly fast. And of course, it makes the combat a damned sight harder than any of the previous entries in the series. You will be blind-sided often, by shambling zombies, over-sized termites, and quasi-velociraptor demons. And it will never cease to be annoying. Having said that, between the running and the markedly different AI in this game, the combat feels quite different to the previous games, and is much less of a circle-strafe-fest. More interesting, but the slow speed of the player character will kill the interest of many gamers.

Those that do stick with the game will find it to be a compellingly dark experience, matching – and perhaps in some ways – surpassing any of the previous King’s Field games. It is indeed an uncommon and under-appreciated gem.

American: as King’s Field: The Ancient City
Original release SLUS-20318 on March 25, 2002, published by Agetec (who list the release as being on the 26th).
There is another edition with catalogue number SLUS-20353.

This is a reissue box set released on the 25th of January 2007 with the catalogue number SLPS-25725. It contains all four of the original King’s Field games, a video DVD, a soundtrack collection, manuals and a “visual book”. All of the games are the Japanese editions, and this was never issued outside of Japan.