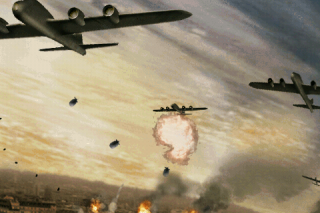 Here’s a look at the somewhat lighter side of Wolfenstein. A spiritual sequel to id Software’s previous Doom RPG and Orcs & Elves, this RPG is yet another retelling of the classic Wolfenstein story, where you play as BJ Blazkowicz and must escape your captors. In this instance, though, you’ll need to do things like talking to your fellow prisoners (members of an Allied assault team who were supposed to bail you out), interrogate Nazi scientists, and shoot, kick, and electrocute chickens to get health items. 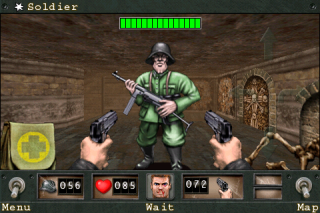 Being an RPG instead of a shooter, the game plays in a turn-based fashion similar to a Rogue-like game, where one step or action by the player allows all other characters in the area to take one step or action themselves. You have a very huge inventory, which can carry tons of weapons, health packs, and an assortment of syringes, which can be used to give you boosts in accuracy, regenerating health, speed boosts, and other neat perks. The game takes advantage of its deliberately slow pace, encouraging you to take your time and check out every little corner, read the books on every bookshelf (in addition to just being silly two-page jokes, they offer you temporary stat boosts), and destroy all the furniture to see if anything is hidden within. 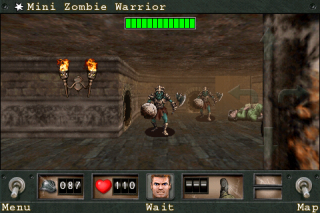 Much like Doom RPG and Orcs & Elves before it, while the “serious” setting remains, there are tons of absolutely silly things you can do. You can punch the Hitler portraits in the face, which makes Hitler’s toupee pop off for a brief moment. In the first level, there is an insane officer who will challenge you to a card game before jumping off the castle wall. When speaking to scientists, you can either bribe or punch them to get more information. And then there’s the chickens, who show up in the strangest of places, like attached to torture tables, where you can then turn the power on, converting them into roasts that restore your health. There are bonus medals that you can obtain by kicking and destroying every object in the level, even the things that don’t reveal secrets. Yes, Wolfenstein RPG is a very silly game, and that’s precisely what’s so great about it. Hardly since Hogan’s Heroes have we seen anything that toys so much with the usual World War II tropes. You gain experience from doing mundane things like reading books (including a very suggestive romance novel which temporarily reduces BJ’s Focus statistic), shredding Axis flags, and knocking over suits of armor. The game basically rewards you for doing everything possible to wreck the Third Reich. 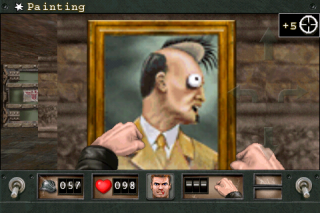 This game is available for most JRE-capable mobile phones, as well as the various iDevices. The mobile versions are obviously not quite as good, but they’re all pretty much the same game, though the iOS version has much improved sound and graphics, and is likely much more accessible to most gamers than the JRE version. The iPhone version recycles a lot of sound and music from Return to Castle Wolfenstein, but the graphics are all new, taking on an exaggerated comic book style similar to Orcs & Elves.

Wolfenstein RPG is a worldwide release to all territories that host the iTunes App Store, including Germany. id Software didn’t want to complicate matters, so the enemy forces are only referred to as “Axis” and the Hitler portraits have soul patches instead of the traditional toothbrush mustache. There is also no blood. This is likely due to Apple’s App Store regulations (which, most infamously, resulted in the removal of a fart noise app) more than regional concerns like Germany’s BPjM index.