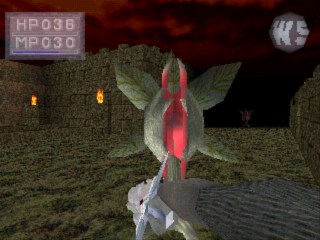 Bigger is better, right? The third King’s Field uses the same engine as the previous game and has you – as Prince Lyle – scour the land of Verdite to retrieve magic powers from four mages, in order to defeat a corrupt king. King’s Field 3takes you through open fields, dingy caves, dark forests, and treacherous lakes. This time the game is far, far more “open” and – once you receive the map showing you the whole playing area not far into the game – you realise that you will have to trek through vast areas to reach the final boss. And, unfortunately, it simply isn’t as engaging.

But first, the improvements: the visuals. Textures are marginally less repetitive, but there are more of them and they look a touch more realistic. The enemies are a touch less low-poly and employ a little more detail in their appearance. The cast is, again, a diverse one, and there are a tonnage of NPCs and more than one town to visit. The problem is that they take damned ages to get to. 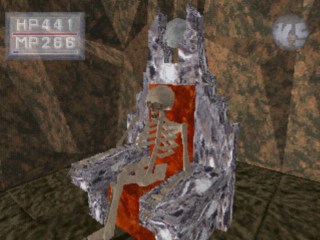 Combat is… different, if only because the AI finally receives some tweaking. Enemies will match your circling if you persist in one direction, making it rather trickier to reliably keep them at bay. However the solution is disappoingly simple: strafe the other way. You’ll probably get used to this very quickly and find it makes barely any difference to the challenge. HP, MP, items and the like work as before, save for having separate levels for the differing magic types: be sure not to use crystals until you have at least one point in that particular type of magic! Crystal flasks double for potions, though they’re harder to come by, and keys are used here in precisely the same manner as before (the functional equivalent of the Rhombus keys are known here as “Silviera” keys).

The sound effects are pretty much the same, but the music has taken a distinct shift towards a “generic game orchestra” style. Tinges of the medieval, fantasy, and more common grandiose epic RPG are present, and while there are still a lot of memorable melodies, the lack of energy and drive compared to the previous two games is a touch disappointing.

However there is one glaring negative: the level design is disappointing. After the interconnecting madness and claustrophobia of the previous two games, From Software seemed to have decided to shift the focus of King’s Field and make it “more like Zelda“, and as aforementioned the areas are more varied here. There are again many cave and tunnel areas in the game, and they are still compellingly maze-like, such as the Thieves Passage, or the confusing Forest of Varde. There are less secrets, but lots of twists and turns and rooms to discover. But the towns just aren’t particularly interesting, since they tend to be made up of a few houses dotted around a large open area populated by the odd bridge over water or lava, and the occasional monster. This takes whatever sense of claustrophobia could have been present in the game, and pretty much removes it entirely. Even when the player finds themselves in some of the more tunnel-esque areas, such as the Path of Poison, many of them just aren’t nearly as convoluted or twisted as the previous games. 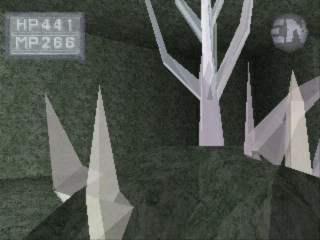 Talking of which, the Path of Poison is one area in the game where the player will have to make use of a specific type of key. Unlike other key types, these open rooms and unlock items from containers. They are also one-time-use only. The player is initially given two, and then must find some later on. However, in order to progress further, one of those keys must be used to open the only passage that accesses the next area. Again, these are one-time-use keys, and if you have already used both of the first two you’re given, you cannot progress any further. Time to re-load that last save from an hour ago!

Since the game is made up of distinct areas, they often connect with only one tunnel. The Thieves Passage is an exception as it happens to be a hub for four different areas, and Ralugo a hub for three, but this is only interesting on paper. In practice, it feels like a chore. The previous two games would offer multiple ways of reaching different areas, and a player that had memorized the levels or could read maps well enough could then devise quick ways to reach their current destination. In King’s Field III, this isn’t nearly as feasible. You have to slog through the same areas many times to pass to other areas. You are later on given some teleportation possibilities, but it still feels like a slog.

When an area isn’t acting as a vast hub, they instead feel more self-contained, such as the second area the Ancient Battleground. It is is very linear in progression (though not to the same extent as Demon’s Souls), and once you’ve thoroughly explored it, you won’t want to come back to it. And vast swathes of the rest of the game are like this, sometimes less linear, other times just as much. Some areas require you to return to them when you have the requisite items, but this only adds to the plodding pace. King’s Field has never been a fast game to play, but progress always – crucially – felt rapid and persistent. Here this is no longer the case, and the constant trudging back to previous areas breaks this sense of constant progress. 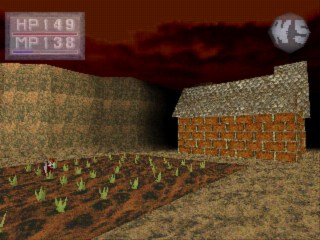 It’s also worth mentioning a level design nadir present in the game, and that is The Palace Of Wind. Many areas in KF3 are designed such that there are two, maybe three, main paths through which the player must explore to progress. The Palace Of Wind shuns this in favor of a symmetrical level design (also known as a “cop-out”, and more proof that the level design team were phoning it in here and there) and another frustrating backtracking mechanic: in order to unlock all the chests in the area, there are many rooms that contain items that must be activated. Once the player has done this, they will then have to scour back through every inch of the area to receive any of the goodies in the chest. And I might as well also mention that there are absolutely no secrets, either.

Ultimately, King’s Field III is disappointing, and that’s perhaps also why From Software took another five years to follow up on the game. Perhaps the development was rushed or the well of ideas was running low. It’s a shame that the level design ruins the sense of claustrophobia, drops the deep interconnection of the previous games and – ultimately – feels a lot more generic.

There was no European release.