Released in late 1987, Bio Senshi Dan: Inkrizer to no Tatakai (“Bio Warrior Dan: Fight Against The Inkrizers”) is an interesting footnote in the history of video games, as part of the first wave of Japanese games that experimented with more complex, non-linear gameplay ideas, most likely inspired by the success of The Legend of Zelda and Metroid the previous year. 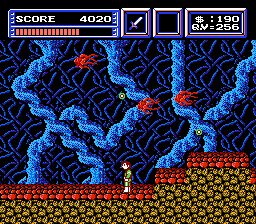 However, unlike contemporaries such as Faxanadu and Castlevania II: Simon’s Quest, Bio Senshi Dan‘s attempts to blend traditional side-scrolling action with a focus towards exploration and backtracking resulted in a frustrating game that is more fascinating for its history and ideas than anything else.

You play as a bio warrior named Dan, who has been sent back in time to the year 1999 to prevent an alien invasion by the treacherous Inkrizers before they go on to conquer Earth in the distant future. You do this by exploring five areas from within the body of a gigantic Inkrizer (which looks something like a battleship-sized insect slug) and killing the Alien Queens hiding deep within. 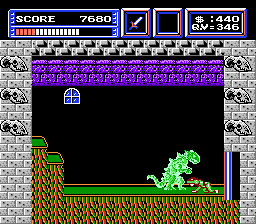 Bio Senshi Dan is a side-scrolling action game typical of its era, where you run around, jump across gaps and attack the numerous mutants lurking about. However, the levels are presented in a maze-like fashion, with elevators and secret tunnels linking the various sections together, so there’s a bit of challenge in figuring out where to go and what to do.

Scattered around the world are doors that lead you to many strange people who wish to sell you power-ups and weapons, provide you very cryptic hints about the stage, give you rest for the night, or challenge you to wrestling matches. To afford most of these, you’ll need money, which can be found by killing the mutants and collecting the little symbols left behind. 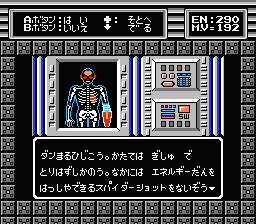 The most interesting idea presented is that the Alien Queen’s health starts at zero and increases over time until you reach them. This forces you to decide whether to rush through to the Queen while they still have low health, or to explore the level and find items with the knowledge that the Queen will be much more powerful when finally reached. Unfortunately, despite these ideas having the potential to make for a good Metroidvania-lite romp, Bio Senshi Dan is held back by several problems in its game design and overall lack of polish.

When making an action game with a big focus on exploration, it’s best to make sure that the character controls well and can react effectively to whatever dangers they encounter. Sadly, Dan just isn’t a very capable character for his surroundings. Movement is very stiff and slow, leaving you unable to avoid enemy attacks and making backtracking more arduous than it should be. You have no air control, meaning that you can’t correct a mistimed jump or avoid an enemy that’s suddenly flown in. And unless you deliberately make an effort to buy weapons at the various whops, you can only attack directly in front of you, which feels rather unfair given how many enemies are capable of flying or jumping above your attacks. 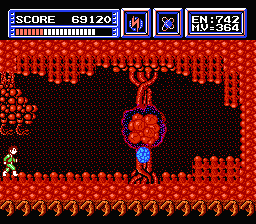 On that note, the enemies themselves are often a pain to deal with. They’re able to attack you head on or with projectiles that you are unable to dodge, while you have considerably less firepower and maneuverability. The different types of enemies move in awkward patterns that make it very difficult to approach them without getting hurt. And like with many games of the late ’80s, they’ll respawn within a few seconds of being killed, which is massively irritating when you want to try and play things carefully. They also evolve over the course of the game, lending to the game’s biological theme. 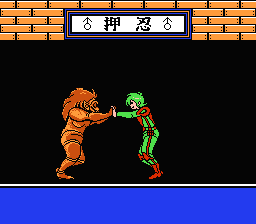 While you do have a lot of health to take plenty of beatings, it feels like it’s only there to compensate for how ineffective you are at dealing with enemies, and it still doesn’t feel like it’s enough. Outside of hotels to rest at (which you can only use once before they suddenly become fully booked), the only way to regain health is to attack bits of the environment and hope that there’ll be a syringe hiding away. Not that that the game gives you any indication that you can do this, or that you can miss vital doorways hidden underneath innocuous blocks that have to be smashed; the latter of which may force you to backtrack like crazy to find something you missed. 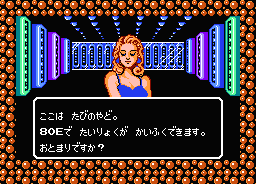 In relation to backtracking, you don’t have a map to help guide you through the level, which (though common in its day) is bizarre given the exploration-driven nature of the game. Trying to hold all of the different rooms, passageways and doors in your head can be legitimately difficult, especially when trying to deal with all the issues mentioned above, and it would’ve gone a long way if the game had provided even a very basic map to help orient yourself.

The worst thing about Bio Senshi Dan, however, is its lack of passwords or a save system. If you run out of the five continues the game gives you, you have to start the game all over again. If you have to end your session because something came up or you’ve had your fill for now, you have no way of getting back to wherever you left off besides plugging through the game again. This turns what is already a frustrating affair into a near-unbearable experience for all but the most ardent of NES/Famicom action fans. 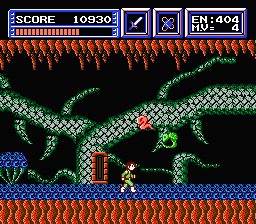 The presentation goes some way towards making up for this, though not much. The graphics are overall decent, largely thanks to a unique visual style that has the levels looking like the internal organs of a giant monster. This is backed up by a good bit of color contrast to distinguish you from the enemies (though they bleed into the backgrounds on occasion) and some nice touches like being able to see the floor and enemy highlights in pitch black rooms. However, they suffer from the flickering sprites and slowdown often seen at that time.

The music (composed by Tsukasa Masuko, who went on to do the soundtracks for the early Megami Tensei games) is serviceable, with decent melodies and basslines that almost become catchy, and even a couple of pretty good tunes like the Computer Theme. However, they become very repetitive due to how short they are, which gets especially grating given how long it can take to complete some levels. 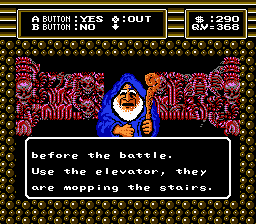 What is unusually distinctive, and what has earned the game a cult following in Japan, is its bizarre cast of characters. The plot, visual style and core gameplay paint Bio Senshi Dan as a sci-fi horror action game along the lines of Street Fighter 2010, and yet, you’ll be running into modern hotels with attractive female receptionists, Chinese caricatures selling you power-ups, and a troupe of sisters who want to sumo wrestle you at any given opportunity. There are some particularly bizarre Japanese cultural references, like some of the characters speaking in Kansai dialect, and one of them looks suspiciously like TV presenter and rakugo artist Katsura Bunshi VI. It’s such a strange contrast with the bio-horror trappings seen everywhere else that it becomes oddly charming, much like the oddball citizens you can meet in Earthbound. After each level, there’s a bizarre cutscene of Dan changing forms into different creatures (including a centipede and an ostraich) but this has absolutely no bearing on anything anywhere else in the game. 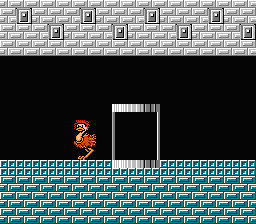 The only other thing to note about Bio Senshi Dan is its cancelled localization. Around 1989, the game’s publisher Jaleco attempted to bring it over to the US, rebranding it as the hilariously Tintin-esque Bashi Bazook: Morphoid Masher. The game was fully localized, with dialogue expanded upon to give the game more personality and make up for some of the lost cultural references, a rebalanced difficulty that makes the initial stages harder, and numerous sprites redone to suit the western market (e.g. Dan resting at a Japanese inn is changed to him relaxing in a hotel bedroom), and “Mother Vitality” (MV) changed to “Queen Vitality” (QV). However, it ultimately went unreleased. Whatever the reason, Bashi Bazook was cancelled, though a prototype ROM of the game were eventually leaked online and it can be played from start to finish without issue. The game bears some strong similarities to Xexyz, another non-linear side-scroller where you could earn power-ups and interact with an eccentric cast of characters, so it remains a good alternative.

A Lost Levels article about the cancelled Bashi Bazook – http://www.lostlevels.org/200508/ 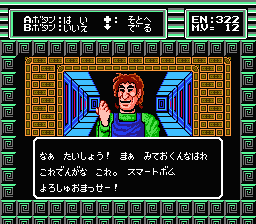 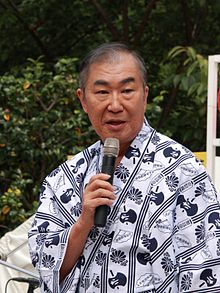 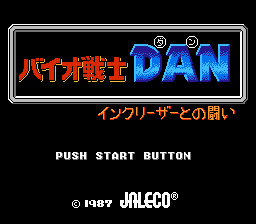 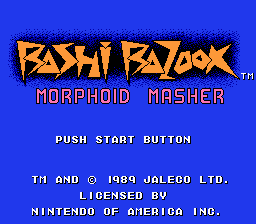 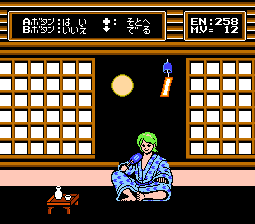 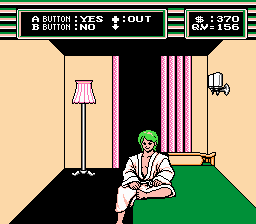