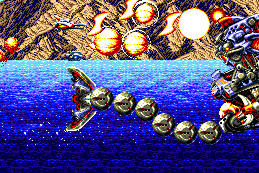 After the success Technosoft had with Thunder Force III, they decided to up the ante with the next installment, and push the Sega Genesis to its limits. The results of their labor cumulated with the release of Thunder Force IV (known in North America as Lightening Force for some reason), which is commonly regarded as the apex of the series. 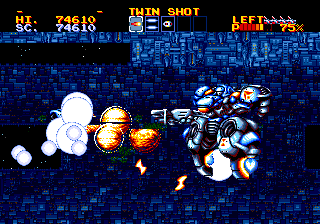 Graphically, Thunder Force IV is easily the best looking of the 16-bit Thunder Force installments, and one of the best looking Genesis games altogether, employing some awesome effects to wow the player, such as those seen in the striking parallax heavy first stage. The graphic design is bright and colorful, setting itself apart from the typically dark color palette in other Genesis shooters. Exclusive to this game, many of the stages span heights greater than a single TV screen, giving you wider areas to maneuver around and a sense of vastness from where you’re flying. The graphical effects are so high that occasionally it becomes a bit too much for the Genesis to handle and the game suffers from noticeable slowdown at times.

Music wise, to call Thunder Force IV‘s soundtrack great is an understatement. As far as Genesis soundtracks go, it’s one of the best on the system from both an artistic and technical standpoint, standing among greats such as Streets of Rage 2 and MUSHA, and further demonstrating the masterful skill Technosoft had at handling the Genesis sound chip. It’s basically a combination of fast paced, guitar driven, power rock themes, such as the ass-kicking intro and boss themes, and more reserved, laid-back, jazzier themes, like “The Sky Line“ in stage three. As a bonus, beating the game and then going into the config menu allows you to access some nice Omake tracks. The music was composed by Toshiharu Yamanishi, Takeshi Yoshida, and Naosuke Arai. 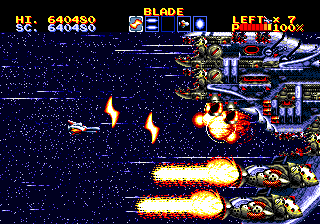 The ship in this game is called the Fire Leo-04 Rynex, and in the Japanese version, the pilots are Roy S. Mercury and Carol T. Mars. The gameplay for the most part remains unchanged from Thunder Force III, with a few slight modifications. Like in the previous game, you get to choose where you want to start, but now you can pick the order of the first four stages. The standard Thunder Force weapon system also returns, but the weapons are very balanced here, as each one has their advantages and drawbacks depending on the situation.

After the game’s halfway point, you get the ability to use Thunder Sword, a devastating frontal lighting attack. The two requirements for using it are to have CLAWs and to wait for it to charge by refraining from firing. After a few seconds, the Thunder Sword will charge to full power, however it can be fired beforehand to discharge a lesser blast. The drawback to using the Thunder Sword is that it leaves you vulnerable while you wait for it to charge, and it has major recoil, so you can smack into something behind you if you’re not careful. 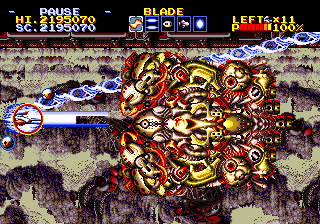 Despite your impressive arsenal, the game is very challenging, much harder than Thunder Force III. You’ll no doubt be dying frequently during attempted playthroughs as the game can lay it on you pretty hard. On top of that, the bosses aren’t pushovers this time around, and the harder ones can take quite a beating before they finally go down. While difficult, the game is beatable. It’s just a matter of memorizing the enemy patterns, learning where to position your ship, and finding the best weapon to use in various sections. It will take some replays to figure all this out, but the game is long and fulfilling enough to keep you playing. Without question, this is one of the must play shooters on the Genesis. Other than the title change (and the misspelling of the word “lightning“), the American version has a bug in the options screen that grants you 99 lives if you set your ship count to zero. 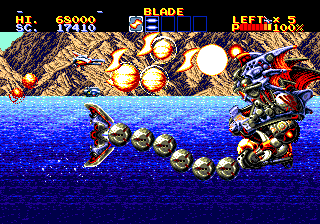 On the Saturn’s Gold Pack 2, Thunder Force IV removes the slowdown that sometimes plagued the Genesis version. It also contains a neat bonus – the ability to play as the Styx from Thunder Force III, if you manage to beat the game in a single credit. The music is spot on, though the sound effects are a little off. There’s also a “Kids Mode“ that lets you keep your weapons on dying and gives you a shield and CLAWs upon respawn.