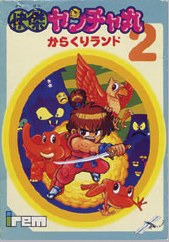 Although Kid Niki/Yanchamaru was born in the arcades, Irem decided to move the franchise to the home consoles with the second entry. The basics are essentially the same – as the little hero Yanchamaru, you use his spinning blade to save the princess once again. However, you can now take three hits before getting killed. Each stage is littered with bells which grant a number of power-ups. Most of these drop coins, but health restoratives are also quite common, making it easier to stay alive. Your sword is more versatile and can be used both upward and downward, and there are also a number of extra abilities. Once you’ve obtained them, you can access the pause menu to surround yourself with lightning, or bestow yourself with powerful energy waves. You can also turn yourself into a variety of pink colored animals, including an elephant, a bird, and a frog. Despite their trippiness, these aren’t very useful, except for a few times where you might need the bird to fly to a power-up. 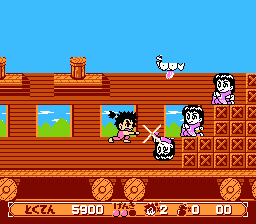 The graphical style has been given a totally makeover, with Yanchamaru shrunken into a super deformed midget, and the rest of the enemies amplifying bits of the weirdness found in the last game. Instead of adventuring through Japanese forests and castles, you’re exploring a demonic theme park named Karakuri Land, with each level having its own theme. One takes place on a train, another is a spoof on the Japanese underworld, and yet another takes place in a world of food, complete with evil strawberries and platforms made of Hershey chocolate bars that cut off enough of the logo so it’s not blatantly infringing on copyright. The enemies are equally as silly, with one boss comprising of a gigantic newborn chick, fresh out of the egg, and the final stage contains several revisions of bosses from the first game.

It’s a fun, colorful game, but it just doesn’t feel much like its predecessor. Irem realized that the difficulty of the original was perhaps too punishing, but rather than properly balancing it, they went completely in the other direction and made it far too easy. It lacks its predecessors frantic action and its tightly designed stages. As such, the game’s eight levels go by far too quickly.