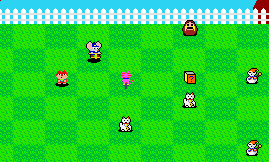 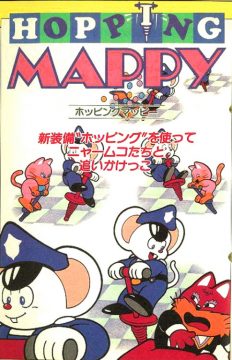 Mappy‘s only true arcade sequel came in the form of the 1986 release Hopping Mappy. (“Hopping” is a verb in English, but in Japanese it’s a noun, for the word “pogo stick”.) All characters now bounce on pogo sticks, and the screen is divided into a grid. The goal, as before, is to obtain all of the items in the stage, and gathering matched items will result in extra points. Mewkies will bounce back and forth, so avoiding them is simply a matter of timing, but Goro moves in a less predictable zig-zag pattern.

Every once in a while, a treasure box will pop up, scattering several assorted bonus items across the screen, which can freeze the enemies, make them temporarily vulnerable to attack, or add a random number to your score. The only button is used to speed up your movement as it’s held down. Mappy can also defy physics by changing directions in mid-air, which is handy if you’re quick enough to realize you’ve made a misjudgment. There are 31 stages, plus bonus levels, which involve grabbing balloons as quickly as possible, while the stage autoscrolls forward.

Hopping Mappy isn’t a terrible game, but it isn’t a particularly good one either. Since the Mewkies tend to bounce in disorganized mobs, it’s really hard to make out when you’re about to bump into one of them. And beyond the extra goal of grabbing items in pairs, there’s not really a whole lot of strategy to it either. Namco must’ve felt the same way, as it’s missing from all of their compilations. It only ever showed up on the Wii Virtual Console, and even the X68000 port (Tiny Hopping Mappy) is just a fanmade conversion. 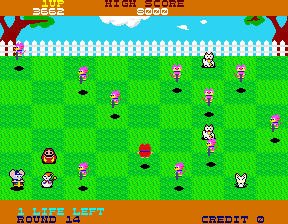 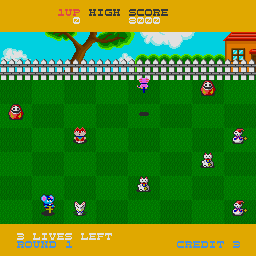