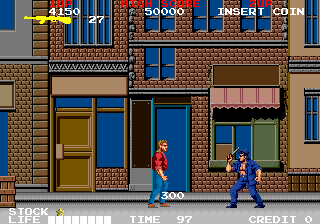 Crime City is basically Taito’s take on side-scrolling action games like Namco’s Rolling Thunder and Sega’s Shinobi. The goal, per the title screen, is to “Crush out the crime!”, as one of two take-no-nonsense cops. The heroes, who are “the supreme law!” are Tony Gibson and Raymond Broady, both hailing from the company’s other law enforcement-based arcade racer, Chase HQ. They in turn were based on any number of American action heroes, though the most obvious buddy cop inspiration at the time was Lethal Weapon. 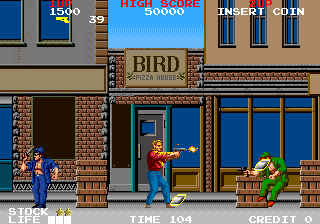 Each of the game’s six stages are based on foiling some kind of major crime – a prison break, weapons smuggling, etc – but since this a late 80s arcade game, it mostly consists of walking forward and shooting everything. There is technically a life meter, as running into an enemy (or getting hit by a car) will knock off a block, but getting shot will kill you outright. Your ammunition is limited, though enemies regularly drop refills, as well as more powerful weapons, which include machine guns and three-way shotguns. Whenever you run out of ammo, you’re reduced to using your fists until you find a replacement. Frustratingly, your default pistol doesn’t act as a backup when you run out of bullets for a special weapon, like it did in Rolling Thunder. In other words, when you pick up a machine gun, you’ve essentially discarded your pistol, so when you exhaust your ammo, you’re left with almost nothing.

There are a few other minor but notable changes from the formula. Rolling Thunder and Shinobi often had two-tiered levels that let you jump between floors, but Crime City has nothing of the sort, which reduces some of the strategy since you’re usually confined to the ground. There aren’t any kidnapped people to find or doors to search either, so beyond the occasional hostage standoff, where if you kill an innocent, your cop will die of shame, there’s little else to the shooting. At a few points, your character will turn to the background and the game will shift into a gallery shooter a la Cabal or the 3D stages of Contra, though these segments are brief and there’s not really much to them other than offering a bit of variety. It does offer two-player simultaneous play, which Rolling Thunder didn’t have until the second entry and Shinobi didn’t have at all, so it does feel a little more like Contra in that respect as well. Plus, you resurrect immediately where you die or run out of lives, so it has more of a fast-paced feel, though in turn it doesn’t require that you learn the levels as well since you’re just blazing right through them. 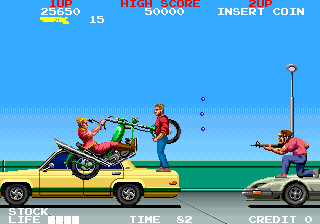 So most of Crime City‘s deal is that it’s like some other arcade classics except not really as good. Except, it does have a certain endearing loopiness about it. For example, the second mission involves a bank robbery. For some reason, the police force felt that the most logical way to start this mission was to get in a helicopter and lower your cops right in the middle of traffic on a highway. Surely there was a less insane option? Later in the levels, there are barrels rolling around, and then vicious dogs break out of them. Who even put the dogs in there? It reaches low key insanity by the end, right after you rescue the kidnapped mayor. In the game’s climactic encounter, someone who looks exactly like the mayor pops out, except wielding a bazooka. Was government corruption the real enemy all along? There’s no real explanation for this except for the credits, which names each and every character sprite, revealing the evildoer to be the mayor’s identical twin brother. The game just leaves you to fill the blanks for any drama that may have occurred.

The English translation is also ridiculous. There are only little bits of text, like in the intro where Tony is begrudgingly called in on his day off to fight crime, or the various newspaper headlines that report your criminal-killing deeds. It’s filled with typos and other text that were obviously not written by a native speaker. (“Let’s go for a kill time” is some prime hilarious nonsense.) But it ends up giving off the vibe similar to a spaghetti Western, or any number of European-produced fantasy movie, in that it’s meant to be a Hollywood production but obviously made by non-Americans at a significantly lower budget. 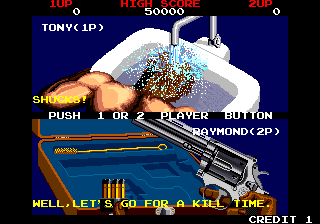 The attention to detail in regards to enemies is a nice touch, too. Since each stage features a different type of criminal activity, the gang members all dress differently. The smugglers look like fancy mobsters, the bank robbers all have masks, and so forth. The high score entry screen also lets you create your own little message by shooting bullets holes into a wall, though surely this was rife for abuse. Taito must’ve thought of this as there’s a dip switch to change for a more traditional three-letter initial entry. 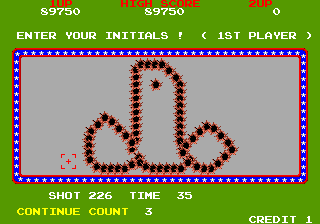 So even though Crime City isn’t exactly a classic, it does still play well, the visuals are decent, and while it’s not exactly Zuntata’s greatest hits, it does have a pretty good soundtrack too. What is unusual is that Taito never ported it anywhere at all, not even on its numerous compilations. Sure, it may be a derivative game on both a conceptual and mechanical level, but it didn’t really deserve to be forgotten.