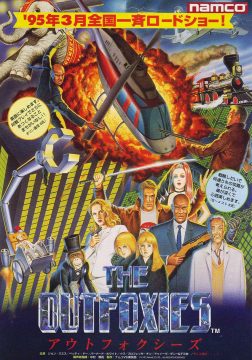 The Outfoxies might rank up there as one of the most ridiculously awesome games ever made. The idea is, a group of seven hitmen/women/monkeys are coerced by a mysterious Dr. Acme to fight each other to the death in one-on-one combat. Instead of the usual Capcom or SNK-styled 2D fighter, The Outfoxies is an arena fighting game vastly predating Super Smash Bros. or Jump Super Stars. Playing as one of these seven characters, you use anything at your disposal – both weapons and the environments themselves – to “kill your enemy by any means”, as the game instructs. The game was designed by Masateru Umeda, who later went on to make the 3D Qix clone/clothes stripping simulator Dancing Eyes. 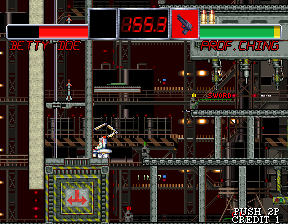 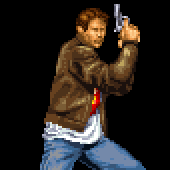 A man with a cool leather jacket (and a somewhat dorky t-shirt), John’s the most normal of the bunch, with no special attributes. 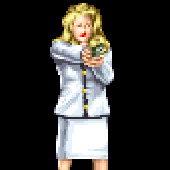 A businesswoman who turned to the life of a hitwoman to fund her several businesses. Like John, she has no special attributes. 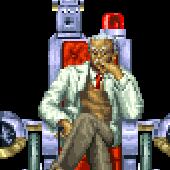 A brilliant scientist, stuck in a wheelchair. He’s loaded it with gadgets, though, and although he’s crippled, he’s a famous martial art master. He can also block bullets with the back of his wheelchair. 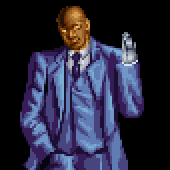 A bio-engineer who lost his hand in an experiment, so he replaced it with a metal prosthetic. He’s the tallest fighter in the game, which unfortunately makes him a bigger target. 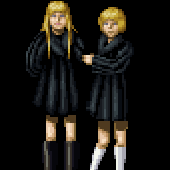 Two Siamese twins seperated by a train crash, who are constantly holding on to each hand. Though they’re young, they’re just as deadly as the rest of the hitmen. 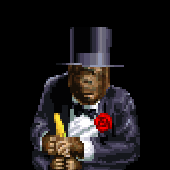 Just because he’s a chimpanzee, doesn’t mean Dweeb is any less deadly. Dressed up with a top hat and tux, Dweeb is the most acrobatic fighter, able to jump higher and run faster than the rest of the cast. He’s also the smallest target. 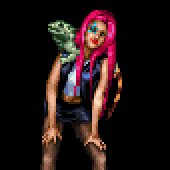 A has-been film starlet who turned to a life of crime. Her pet iguana follows her everywhere she goes, even if it gets separated from her. 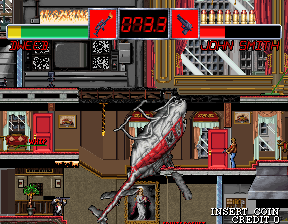 The game itself sorta feels like a cross between Rolling Thunder and Elevator Action Returns. The Outfoxies uses a lot of scaling and rotation effects, as the screen zooms out as the fighters get farther away from each other, and zooms back in when they meet up again. It looks great, although it’s quite pixellated when it’s zoomed out the most. There are only two buttons – Attack and Jump. Holding the joystick up or down when jumping lets you climb through platforms to reach higher or lower levels, and different joystick directions let you aim your weapons and close-quarter attacks. You can also double tap to run. It’s a little hard to get ahold of at first, especially since climbing obstacles and picking up weapons can be a bit awkward, but you get used to it after a bit. 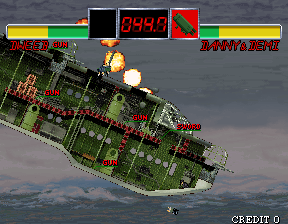 You can run forward and try to beat your enemy senseless, if you’d like. Close-quarter attacks only do very slight damage, though, so if you want to cause some real pain, you’ll need weapons. They run from standard things like pistols, machine guns, rocket launchers and flamethrowers, to more creative weaponry like swords, hot soup, and even pie. Since it’s hard to pick out the weapons amongst the chaos, there are little flashing indicators that appear on screen to show you where they’re hidden. The guns have limited ammunition but you’ll chuck your firearm in true action movie style whenever you run out of bullets. You can also find crates and barrels to toss around, some of which can get stuck in your opponent’s head, causing them to blindly fumble for a few moments. Any weapon will also be knocked out of your hand if you get hit. 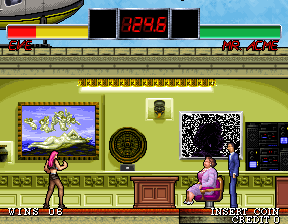 Just as deadly as the weapons are the environments themselves. One of them is a huge cargo plane mid-flight, which will occasionally nosedive or shake violently if you toss a grenade. Similarly, there’s a boat out in the middle of the sea during a storm, which will occasionally submerge underwater. One level takes place aboard a moving train, which will enter into a tunnel every once in awhile, damaging anyone who’s standing on the roof. In these stages, you can toss your opponent off the edge (or fall off, if you screw up), although your character will automatically be returned onto the playing field at the expense of some health. 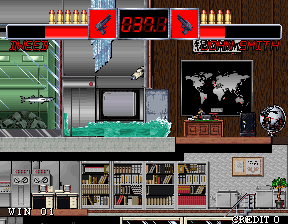 One of the most creative levels is an aquarium that begins exploding around you. Water constantly floods from the broken tanks, and loose sharks chomp anybody who gets too close. When the timer reaches a certain point, the stage will change somehow, opening up more sections or making things tougher for you. One cool example is an exploding skyscraper. You start out at the top, and as it explodes, you can fall into the lower levels, like the fancy dining room where you can toss food at your enemies, . The whole game feels like a ridiculously over-the-top action movie, the kind that throws pretty much everything except the kitchen sink. The fact that you can do such incredible amounts of damage to your foe, and they basically just shake it off, stand up, and get back into the fight, as long as they have life remaining, is remarkably funny. 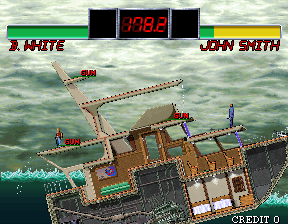 The final stage is just as cinematic as the rest of the game. Mr. Acme makes you chase him through his mansion, avoiding the traps he’s set for you. When you corner him, the “twist” is that the man actually isn’t Mr. Acme…it’s actually his wife who’s been giving you instructions all along. They reveal their plans to betray you, before you chase them to the mansion’s rooftop, where they try to escape in a chopper. You blow them out of the sky with a rocket launcher with unlimited ammo, and, in a humourous ending, the servant is crushed by his “Mr.” Acme before the helicopter crashes on top of them both. Each of the individual characters also a signature way of defacing their opponent’s image on the TV screens between stages – John writes “DONE” on a piece of paper and slaps on it them; Dani & Debi scribble them out with marker; Dweeb replaces their image with a children’s TV show; Bernard simply punches and shatters the screen. Each also has their unique (and rather silly) pictures as the end credits roll. Arguably the best one is the one with the monkey at a strip club. 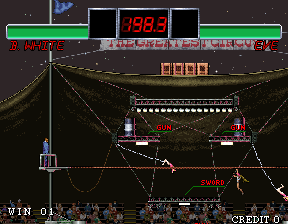 The sound is pretty good, too. Most of the music is pretty jazzy, with a lot of synth saxophones and pianos. The sound effects are just as loud and clear as they should be, although none of the playable characters speak, aside from grunts and screams. Dr. Acme provides plenty of voiceovers in the cutscenes, though. 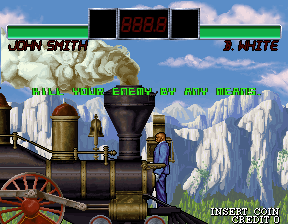 The Outfoxies received little attention after its initial release in the arcades, not even enough to garner a console port, and was soon forgotten after. It’s clearly a game that was ahead of its time, especially with the proliferation of the genre after Nintendo’s mascot fighter hit the streets. Even then, it’s so radically different from Super Smash Bros. that it’s still worth checking out, because it truly is a one of a kind game.