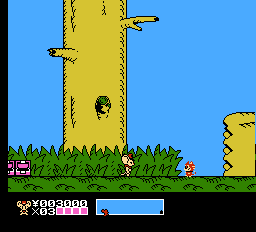 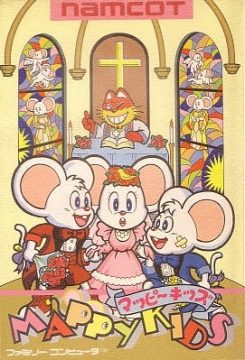 Mappy Land told the story of Mappy and Mapico finding love. In this sequel, again exclusive to the Famicom, they’ve settled down and had children. Their kids take on the starring role here, as they explore the world and attempt to make life better for their parents.

The gameplay has been changed to a generic 8-bit platformer, with barely any trace left from the original Mappy games, beyond its characters. It’s a bit like Capcom’s Rescue Rangers, in that the mice are supposed to be miniature, running around oversized environments, mostly consisting of houses and yards. It also features two player simultaneous play. 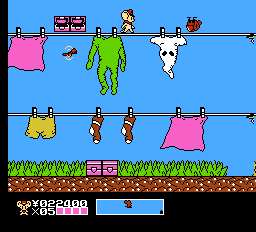 The little mice can technically kick, but their the attacks have no range, so it’s usually easier just to avoid enemies. The main goal is to collect as much cash as possible in each stage. While they can technically take a number of hits, taking damage also depletes a large amount of money, which is a more severe punishment. At the end of each level, you can use your cash to buy assorted gifts for your parents. Apparently the Mappy family starts off near homeless, and the kids can buy windows, picket fences, tire swings, cars, the sun (!!), and other assorted decorations to thank their parents for bringing them into the world. Like Mappy Land, it’s this sort of ridiculously adorable scenario that sets Mappy Kids apart from other platformers.

Mappy and Mapico aren’t the only ones that have spawned though. At the end of stage, you play a slot machine to face off against one of Goro’s three kids. These minigames are generally pretty simple: one is basically a sumo match, as you bump butts to knock the other off a small platform; another has you examining two pictures and trying to spot the differences. These areas feature some amusing cameos from assorted Namco games – one of the pictures you have to analyze features the hooded enemies from Rolling Thunder kidnapping Ki from The Tower of Druaga, and another has them playing baseball (a reference to Namco’s Family Stadium, more widely known amongst English speakers as Tengen’s RBI Baseball). You can also find the hoods of the Rolling Thunder guys lying out as laundry during some of the stages, though due to the coloring, they look even more like KKK outfits than they even did originally.

With the bland gameplay and the minigames, Mappy Kids feels more like an offshot of Namco’s Wangan Land. That series is also bright and colorful, but also incredibly easy and simplistic, and all were clearly aimed at young kids who didn’t have much familiarity with video games in general. As such, Mappy Kids isn’t awful, but compared to any number of titles from Nintendo or Capcom, which manage to hold up to gamers of all ages and skill levels, it’s definitely a lesser product.