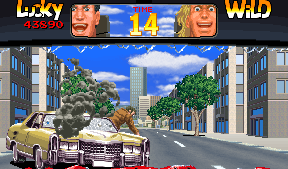 With the successes of 48 Hours and Lethal Weapon, the buddy cop film genre was thriving in the eighties and nineties. The basic formula of “loose cannon cop and no-nonsense detective fight crime together” not only made for some great cinema, but this premise influenced multiple games. Lethal Enforcers and Virtua Cop made two-player criminal blasting a staple of arcades, and Policenauts is basically Space Lethal Weapon. Before any of the above, Taito had a modest success with Chase HQ, which is like OutRun plus ramming criminals’ cars until they break down. Standing within the crossover zone between a Venn diagram of “Cop Shooting” and “Cop Driving” is Lucky & Wild, a product of the same illustrious nineties Namco period that gave us Exvania and the Outfoxies. Namco is certainly no stranger to lightgun games, as evidenced by the prior Steel Gunner and the later Point Blank and Time Crisis. Lucky & Wild wasn’t just an arcade shooter, but also a police pursuit/action movie simulator. 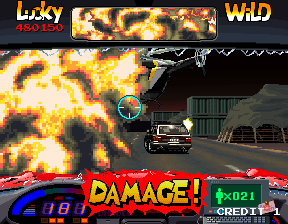 The premise sees the eponymous detectives – the smooth and well-dressed Lucky, and the rugged long-haired Wild – take on gang leaders through six stages. The heroes may bear a vague semblance to Ryu and Ken at first, but they are more likely modelled off of the buddy cop film Tango & Cash, starring Sylvester Stallone as Tango (Lucky) and Kurt Russell as Cash (Wild). Working together to bust crime lord Big Cigar, our heroes throw out police procedure in favor of chasing baddies on roadways and shooting at their cars until they pull over. Whoever plays Lucky not only gets a gun (which appears to be some sort of machine pistol), but also gets control of the wheel. Your goal in each level is to put the pedal to the metal and reach the boss, disabling their getaway vehicle with bullets before the time runs out. Wild only gets a gun without any car control, which is a bit less exciting than Lucky’s double duty, but also considerably easier. Without having to worry about steering out of harm’s way, player two can better focus on their accuracy. If so inclined, the cabinet potentially allows for Lucky to focus entirely on driving while Wild takes both guns simultaneously! 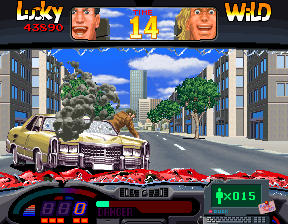 Shooting is pretty simple thanks to secret advanced police technology that somehow gives your guns infinite ammunition. They’re fully automatic and never need to be reloaded, so there’s never any reason to not keep the trigger held down unless your finger gets really tired. Most of the time, you’re shooting at black cars where goons pop out of the windows to shoot or toss explosives. You can either shoot all the thugs or shoot the cars’ bodies to get it out of the way, and you’ll often have to do both. There are also motorcycles, helicopters, and one level even factors in dune buggies. Grenades and Molotov cocktails frequently go flying, while time bombs and even bold criminals jump on your dashboard to cause mayhem. You also need to watch for obstacles ahead, most frequently in the form of cars you just shot up. Try not to get distracted by the insanity of the setpieces, like driving through a mall as a potential classic homage to The Blues Brothers. Another area forces you to curb your speed as you crawl through a narrow alleyway full of gangsters who walk out of alleys and open fire. Yet another has you gun down an enemy helicopter while plowing through a road under construction. It’s never a dull moment for the duo, and if only there was a special cabinet with mobile rotation hydraulics like OutRun, it could qualify as an amusement park thrill ride.

The stages are already crazy enough, but the tension skyrockets during the boss battles. The first boss isn’t much worse than a normal car, but later roadside rumbles include a truck where goons toss barrels out the back, a yellow DeLorean that liberally spams grenades, another truck equipped with a flamethrower, and a rocket-firing monster truck that can only be damaged by firing at its body atop massive wheels. However, to apprehend the criminals, you need to reach and destroy their vehicle within the time limit. If they get away, you can still continue to the next stage, but you lose the big point bonus you’d otherwise get from arresting them. You get more than enough time to fight the final boss, but it’ll likely take you quite a few credits to put Big Cigar in his place. If you’re not careful, you can easily lose your life in seconds, and even if you are careful, you’ll likely have to continue several times before the end. That’s par for the course on most lightgun shooters, so if you don’t mind quarter-feeding, the real challenge is staying alive long enough to reach the boss before they flee. You lose a few seconds slowing down after your lifebar drains, and the boss just might elude you if your shooting or driving skills aren’t quite enough. 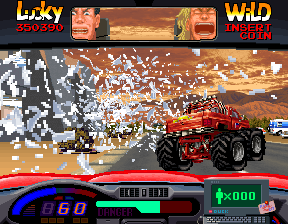 Lucky & Wild just oozes fun out of every circuit. Its genre fusion of driving and shooting is thrilling enough, but it gets bonus points for personality. Every stage starts out with a slow cruise until the windshield gets shot out, where Lucky comically screams about his car being ruined before speeding up. The two of them throw out all sorts of quips like “You creep! I’ll make you pay!” and “You sure do make life difficult!” If they successfully nab a criminal, they head on over to the rather saucily named “Pink Cats Garage” to get the vehicle tuned up. It’s a great game with the only caveat being its unique design. While the car-and-gun setup gives Lucky & Wild its unique identity, it also made it impossible to accurately replicate for a household experience. If arcades still exist near you and you find a working Lucky & Wild cabinet, buckle and load up for a helluva time. 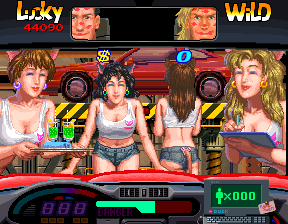