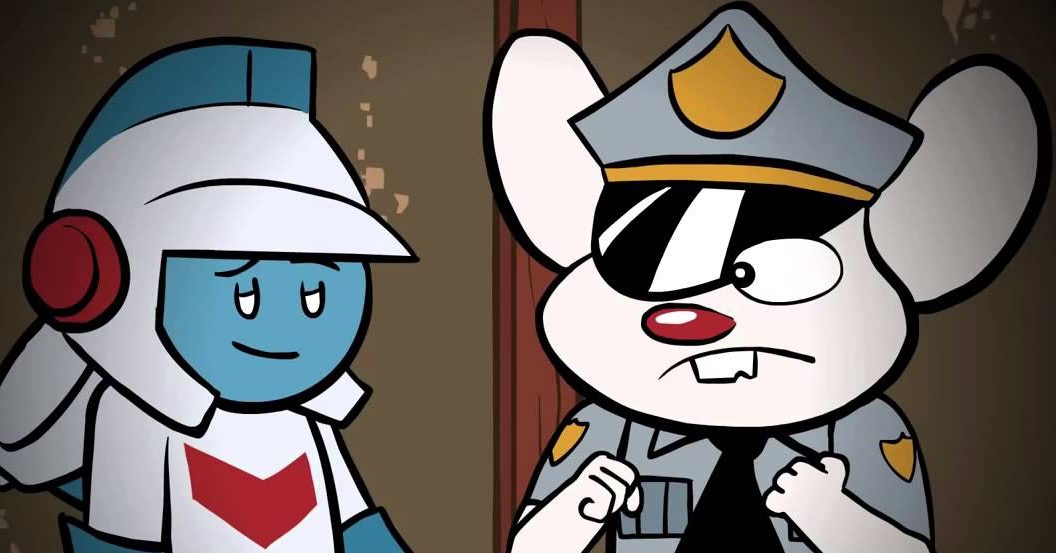 While most overseas gamers are familiar with Mappy and the Nyamco gang through the video games, they actually originated as mechanical robots to be entered in competitions, which were popular in Japan in the early 80s. These typically involved putting the robot into some kind of maze and seeing them try to navigate it. Nyamco the cat actually came first, having been created for the first Microcat event, held in 1980. He was 65 cm in height (2.1 ft) and weighed 27 kg (about 60 lbs). He could move his head, body, tail, and eyes. 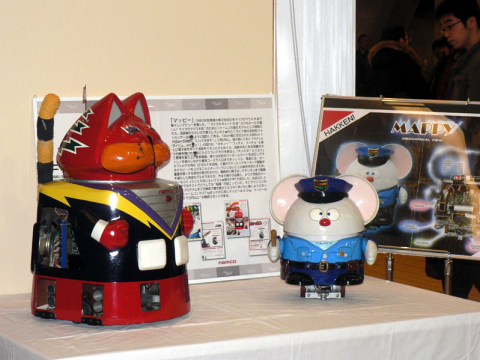 Information on the events, as well as the picture above, found on this Japanese blog. Video: Soreyuke Mappy!

Shiftylook was a project started in 2011 that mostly focused on web comics involving Namco properties. Mappy, subtitled “The Beat”, was one of the few that became an animated series (along with short runs for Bravoman and Wonder Momo), though “animated” is only used in the loosest terms. It’s actually very simple, with no mouth movements for the dialogue and only slight motion every few seconds. The art and voices were provided by Scott Kurtz (from the webcomic PVP online) and Kris Straub, who patterned the animation style after their Blamimations Flash cartoons. 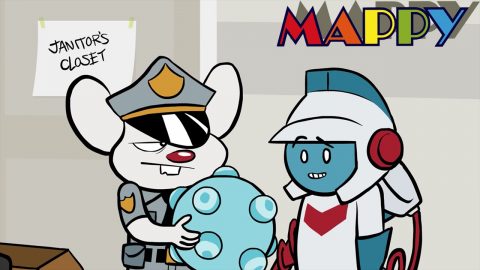 As with Shiftylook’s other comics, the premise is actually quite silly, and in practice ends up feeling like one of those Hanna Barbera parody cartoons found in Adult Swim in the early 2000s. Here, Mappy is a disgraced cop, having been kicked off the police force due to botching one of his run-ins with Goro and the Nyamco gang (he accidentally shot up one of the valuable paintings). Hard up for a job, the story takes place in the present day, as he ends up being hired as a security guard for Nyamco (now a legitimate business, apparently), with Goro as his boss. Of course, Goro only hires Mappy to annoy him and give him grief. The core cast is rounded out by Dig Dug, Mappy’s best friend, and Sky Kid, their affable but dimwitted co-worker. There are thirteen episodes, each about eight minutes long. Keeping with Shiftylook’s theme, there are many references to Namco’s other characters, usually in comedic contexts – Wonder Momo is an idol, for example, and both Mappy and Dig Dug ditch work for a day to drive out to her concert. Other cameos include the Prince from Katamari Damacy (who rolls around his ball and acts as sort of a fancy janitor for the building), the heroes from Time Crisis, Albatross from Rolling Thunder (here acting as a corporate spy dressed in the laziest disguise imaginable) and even the muscular dudes (and the bear) from absurd Wiiware title Muscle March.

The production has a generally amateurish quality, but that’s also where the charm lies. It’s much better for them to have taken this route and interpret the characters in ridiculous ways, rather than how video game cartoons are usually done, like in the 80s for the Super Mario Bros. Super Show, or the Saturday Supercade. It’s actually shocking that this was an officially sanctioned Namco product and not just some fan parodies. The writing does meander sometimes, in that same lackadaisical way of a lot of Adult Swim cartoons, but it can actually be extremely funny, especially with Goro’s scheming-but-not-quite-insidious voice and his absurd plans to make Mappy as irritated as possible. 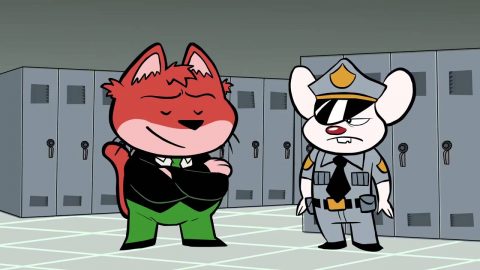 Pretty much everything regarding Shiftylook was shut down and scrubbed from the internet in 2014, though the episodes are currently uploaded by third parties and available on Youtube.

As for the origin of the term “mappo”, there are two theories. The most prominent one hail back to the Meiji era, where many police officers were from the Satsuma Domain, so they were derisively called “satsumappou”. Over the years, this was shortened to “mappou”, and then just “mappo”. The other theory comes from the American occupation of World War II, where military police wore helmets that said “MP”. They were said to be referred to by the Japanese as “Ma-Ppo” so the Americans couldn’t understand what they were saying.