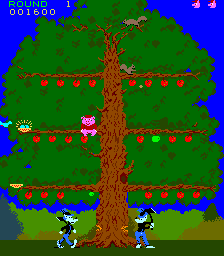 The least likely sources can sometimes make for the least likely video games. Ever hear of Wild West: Cowboys of Moo Mesa? If you have, it’s likely due to the Konami run-and-gun named after it, not the original Saturday morning cartoon off of which it was based. Granted, that game itself is relatively obscure in and of itself, but the original animation is even less known; such is also the case with a much earlier Sega game, an unassuming single-screen action title with the punny title of Pig Newton. Some may be familiar with an anecdote by Louis C.K. about how his daughter is convinced that Fig Newtons start with a “P,” but this was many years before that bit. Pig Newton is actually based on a relatively obscure comic strip of the same name by National Review cartoonist Malcolm Hancock. Why would a Japanese game developer and publisher model one of their games off of a not-too-well-known American comic series? No one can say for sure, but it results in a pretty entertaining if simplistic game.

The premise is as quirky as it is simple. As Pig Newton himself (who looks like a hotel bellhop despite appearing as a farmer on the title screen), your goal is to collect bird eggs out of six different nests precariously placed on the ends of six branches on a giant apple tree. You can move all around the tree and jump down on branches, but you have to wait for the bird to actually lay the egg, or else you’ll scare it off if you approach too quickly. Unfortunately, your attempt to raid bird nests is constantly disrupted by a pair of wolves who want to chop down the tree and capture you. If they slice the base down too far, you get whisked away in their kidnap-sack. To prevent this, you can jump onto apples growing on the tree branches which can bonk the wolves, preventing them from doing their deed. Apples will regrow after a few seconds, but make sure you don’t miss, as that short time when an apple is out of commission may be all the wolf needs to cut you down to size. 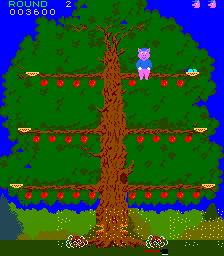 Snagging all bird eggs earns you a horrible pig-related pun, including groaners like “Wow! You’re really bacon now” and “Boy! I never sausage a player.” Your reward for suffering such porky wordplay is the use of a new item in the next round that makes it tougher for the wolves to continue lumberjacking. Your prized apple tree starts to improbably grow instruments of destruction, like a beehive whose angry buzzers vaporize the wolves in a surprisingly morbid animation, and a more controlled banana peel which not only drops the wolves but also causes them to fumble their axe. You also get horseshoes and bombs which also make the villains drop their axes with decidedly more amusing animations. If you’re bold enough to willingly drop to the bottom and snag their axe, you restore a portion of the chopped tree, but this is a risky gambit, as wolves move quicker if you set foot on terra firma.

The wolves aren’t the only things to worry about either, as you’re hounded by malicious squirrels who toss their acorns every which way. Getting hit by an acorn drops you down to the next branch below you, but if you’re on the bottom level, this forces you down to meet the wolves all too soon. Unfortunately, you can do nothing to these squirrels besides avoiding their acorn assault. Furthermore, from round 3 onward, owls fly in and perch on the branches, denying you passage to the nests. The owls can be bonked with apples, but their obstruction may give the wolves enough time to finish their dirty deed.

There’s not much else to say about Pig Newton, but it is a fun and fast-paced game that quickly becomes hectic to survive past the first couple of rounds. The increased aggression of the wolves and squirrels can make it tough to rack up a high score, and you only get the more destructive items in limited quantities. Even if it can be tough to make progress, this game is at least interesting without anything else quite like it. Its graphics, though simplistic, are appropriately cartoonish and charming, and while the sound design is pretty minimalist, the taunting losing sound when you get grabbed by the wolves is quite amusing. It certainly is not one of Sega’s most outstanding titles and seems relatively unknown even among Sega geeks, but it at least has a bit more recognition going for it than Mal Hancock’s original creation of Pig Newton as a comic. Still, this game is another example of Sega always trying new ideas ever since their early years, and anyone with the pork chops to roast up a high score should go whole hog and see how far they can get before they ham it up.