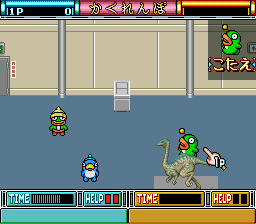 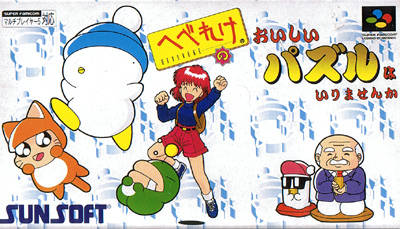 “Hebereke’s Delicious Puzzle” is nothing other than a party game with Hebereke characters. There are three boards comprising four different genres of puzzles: crosswords, spot the difference, crowd searching a la Where’s Waldo? and a jigsaw puzzle. The difficulty between different games can be pretty uneven, even with the hints the game gives.

The only other thing that can be said about this game is that up to five people (as opposed to the usual four) can play together with a SNES Multitap. Their avatars are be Hebereke’s main four plus a pink-haired girl that seems to be the niece of the creepy old geezer featured between the game segments.

This game is the “odd one out” of the series, since it is the only one featuring human characters besides the usual weird critters, and is set in lifelike places rather than the alien Ufouria world. This is explained by the fact that it was originally Oishii Puzzle ha Irimasen ka, a 1993 arcade board game by Sunsoft and Atlus. This also explains why the puzzles’ time limit is so short, since the game was originally a quarter-muncher. Besides the replacement of the totally generic and bland protagonist and the substitution of several sprites with Hebereke characters, the game itself remained exactly the same.