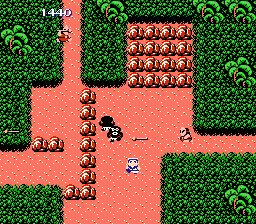 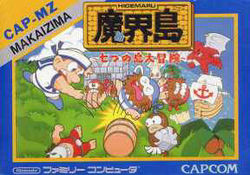 Two and a half years after Pirate Ship Higemaru, Capcom released a sequel for the Famicom called Higemaru Makaijima: Nanatsu no Shima Daibouken, which is Japanese for Round Beard Hell Island: Seven Islands of Great Adventure. It had been a little over a year since the company entered the home video game console market, and up until the game’s release in April 1987, the company had five NES/Famicom titles under their belt: Arcade adaptations of 1942, Son Son, Ghosts ‘n Goblins (Makaimura), Commando (Senjo no Okami), and Trojan (Tatakai no Banka). Unlike the previous Higemaru game, and unlike their previous NES/Famicom titles, this one was strictly a non-linear action/adventure title (the company’s first), and was basically their answer to Nintendo’s The Legend of Zeld, which hadn’t been released in the U.S. yet.

Momotaro, back from the first game, must now sail the ocean, collecting keys from different pirate ships, and using them to unlock each of the seven islands, so that he can gather clues, and gain additional equipment, which will be necessary in uncovering the greatest treasure, which was once owned by a long deceased legendary pirate named Baido. 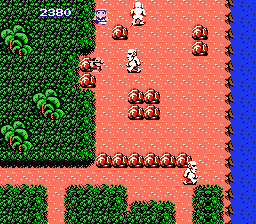 The names of the seven islands are as follows: Cuck, Curse, Mermaid, Hebi (Japanese for Snake), Dokuro (Skull), Ookami (Wolf), and J. Knife (or Jack Knife). When trying to unlock the door to an island, you must look for the pirate ship (which is colored in black, and has a pink flag, with skull and crossbones). You must then defeat a certain amount of enemies, so that you can unlock the door to the boss of that ship, defeat him, get the corresponding key for the island, and then unlock it with that key upon docking in front of it.

The islands feature their own set of enemies (some of which appear in more than one island), as well as a boss that must be defeated. You can now throw rocks that are scattered around at your enemies, instead of just barrels. During your search in these islands, you should also look for items that will aid you in your quest, such as a lamp that is required to unseal an island before actually unlocking it, a chart to help depicter the old language on the monoliths, and a sword that can only be obtained if the last three digits of your hit points have three zeroes (ex. 25,000), and will instantly kill the final boss. When you’re about to return to the beginning of an island, after collecting everything that can be collected, look for pitfalls to jump into, instead of walking all the way back to the entrance. The ending will be different, depending on how many crystals you’ve obtained; collecting all three will result in the best ending (Momotaro uncovering the lost treasure of Baido, following a rundown of all the enemies on all the islands, and the staff credits set to pictures of all of the islands.)

Many aspects have been greatly improved over its predecessor, not only in but also adding little touches to it. There is a hit point counter, and possible ways of increasing it, which include rolling an object down a good number of enemies. This technique is especially useful against the Higemarus near the end of the game, who do a lot of damage to you. Collecting items can also increase your counter, including hidden ones such as the yashichi symbol. But it’s not without its flaws. Unless you have a complete map of the overworld, it’s very easy to get lost while sailing, searching for the next pirate ship to obtain the next key from, and then using it to unlock the island that it corresponds to, not to mention that near the end of the game, you’ll need to look for a special “Ghost Ship”, where defeating the boss on that ship, will give you one of the items that is essential to winning the game, and that you’ll have to backtrack to another island, just to get one more essential item (thankfully, the backtracking in this game is minimal). Also, if you’re playing this game for the first time, it’s recommended that you write down the password (you can view the password on your subscreen by pressing the select button), because if you die once, it’s game over, and there are no continues, unless you use the password to continue where you left off. No save files like in The Legend of Zelda, unfortunately. 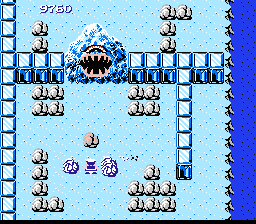 The graphics are pretty good for early NES standards, the backgrounds for the oceans, the pirate ships, the objects, the islands, and the sprites are all nicely detailed, nothing that sticks out so badly. Speaking of detailed islands, the design for Dokuro Island is nicely done. It’s even shaped in the form of a skull! Much like the gameplay, the music is also an improvement in this game. The overworld, the pirate ships, the boss battles, the islands, and the ending all have different music cues, and fit perfectly (although the overworld and pirate ship themes can get a bit redundant at times). Some of the best music cues include the boss theme, Cuck Island, Curse Island, Mermaid Island (with its samba-like rhythm), Dokuro Island (the music for this island perfectly captures its creepy atmosphere), Ookami Island, and J. Knife Island. Music for this game was done by Debara Tarumi and Yoshihiro Sakaguchi (Yuukichan’s Papa), the latter whose other works include 1943, DuckTales, Final Fight, the NES version of Legendary Wings, Mega Man 1 & 2 as well as the original Street Fighter.

The most noteworthy thing about this game was the homage that it paid to Ghosts ‘n Goblins in the 4th level, Hebi Island (hence why this game was subtitled as Makaijima; GnG is known in Japan as Makaimura.) Upon entering the island, which consists of an eight-story tower, a man will warn you that the remaining enemies from Ghosts ‘n Goblinswere sealed up in the tower. Since Momotaro doesn’t have a javelin like Arthur from the GnG games does, he’ll have to deal with them by throwing rocks at them. The enemies from GnG that he’ll have to face are the Zombies, the Fire Flies, the Blue Killers, and the boss of the level, the Cyclops, who, unlike his appearance in GNG, now has the ability to throw fireballs. In addition, the final boss in the game is the infamous Red Arremer, who has drove anyone whose played the game into complete frustration. This adorable looking red gargoyle even had his own spin-off franchise, which consisted of three action/adventure games: Gargoyle’s Quest I & II (or Red Arremer I & II) on the Game Boy and NES respectively, the latter also had a Japan-only GB port, and Demon’s Crest.

Around the same time as the release of the Famicom version, there was also an MSX2 version, which was released under license by ASCII, who had also produced the MSX versions of 1942 and Commando. This version is virtually identical to the other one, but with some slight changes: there is now a directional arrow that helps you in finding out the location to the next pirate ship, the locations for some of the items have been rearranged, and the secret message that helps you in uncovering Baido’s treasure has been slightly rewritten. The music is also slightly different-sounding, and the graphics are slightly better. For example, the Pirate leader on the ghost ship actually looks like a skeletal ghost, compared to the Famicom version, where he looked like every other Pirate leader. A creepy, but nice touch. The only drawback is that the screen scrolls a bit slower, a common problem for MSX games. Also worth noting is that this version is a tad harder compared to its Famicom counterpart. The game was also issued on I-appli phone applications in 2006 in Japan.

Capcom had plans to release this game in the U.S. under the name Makai Island, but that never quite happened. It’s not entirely why it didn’t make it, but perhaps it was due to Nintendo of America’s policy at the time that only allowed five games per year to be released by a third party developer. Fortunately, in 2007, the unreleased English prototype for the game surfaced. It was essentially going to be similar to the Japanese version, but changes had to be made in order to fit the U.S. standards. For example, the text for the dialog portions were originally written vertically and were scrolled from right to left in traditional Japanese style, whereas in this version, the game would cut to a black screen to show the text, kinda like in the NES version of Strider. The cryptic messages on the monoliths were also rewritten, so that they would be easy to understand for English-speaking gamers. Finally, out of fears of stereotyping African-Americans, some of the enemies on Cuck Island were altered. 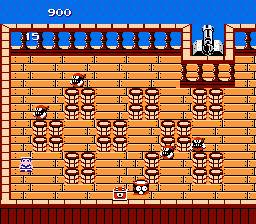 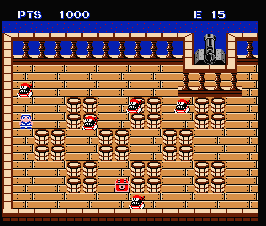