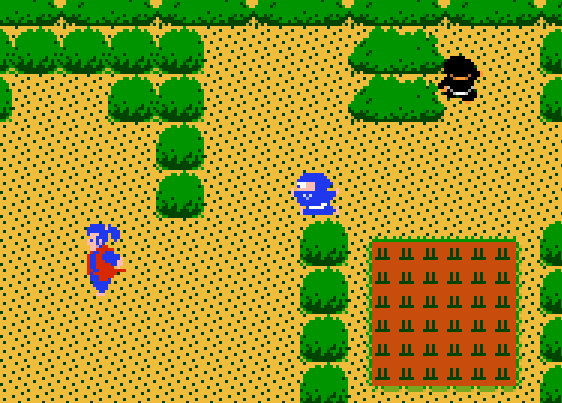 It’s easily apparently that the number of Japanese Famicom titles outnumbers the American/European release by some huge number. And yet, most of those were third party releases. Nintendo was actually shockingly consistent at bringing over most of its titles, and the ones that they didn’t, there were pretty clear reasons. Super Mario Bros. 2 (the real one) was, for example, kinda lame, Famicom Wars and Fire Emblem were probably just too difficult/obtuse for the audience they had, Famicom Detective Club and Shin Onigashima required far more translation effort when, at the time, their best localization efforts resulted in stuff like LET’S PLAY MONEY MAKING GAME, Joy Mecha Fight simply came out too late, and Devil World was a bizarre Pac-Man clone with crosses and demons and all kinds of other nonsense Christian symbolism that just wouldn’t go over in middle America.

And yet, here we have Nazo no Murasame Jou (“The Mystery of Murasame Castle”), a cool little Famicom Disk System title that was never released outside of Japan, that takes the basics of The Legend of Zelda and ditches all of the adventure elements in favor of Commando-style action, while setting the game in feudal Japan. Maybe it was deemed too Japanese to bother reprogramming for cartridge and re-releasing? That didn’t stop Taito’s The Legend of Kage, which has a similar theme, but that was a totally different company, and also had the precedence of an arcade release…

Anyway, the game is about an alien entity that slams into Murasame Castle and takes over a giant statue, which in turn spreads its evil influence to four neighboring castles, each named after different colors. As the heroic Takamaru, you must fight your way through each of these castles, and then take on the demonic source. Each of the five castles is divided into two stages – the “approach” stage, as Takamaru fights his way through the castle grounds, and the “interior” stage, where you explore the castle itself. 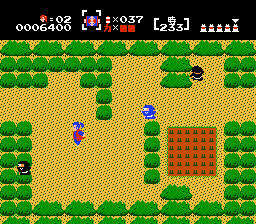 At its core, it looks and controls much Zelda, although it’s a bit faster and much more difficult. Although each level has a definite beginning and end, the path isn’t linear, often containing many branching paths, loops, or simple dead ends. There’s also a time limit to hasten your assault, lest you feel like wasting time. If you explore, though, you can find kidnapped maidens, which will grant you an extra live if rescued. Some of these are actually demons in disguise, though, just for an extra bit of foul trickery.

Ninjas of all types bounce out of bushes, rivers, even thin air to assault you from every direction. Like Link, Takamaru can only walk in four directions while enemies can attack at any angle. However, Takamaru also has unlimited use of long range weapons like shurikens, which can be upgraded to blades or fireballs, and also have a variety of spread shot types. These upgraded weapons use magic scrolls, so you can’t just run around shooting blindly, but most enemies will drop cards to replenish your power. 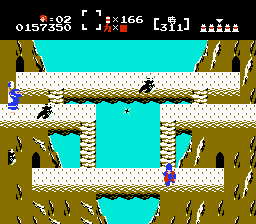 Takamaru can also shred his foes Shinobi-style using his sword, which is automatically used when you’re close enough. More importantly, the sword can also be used to block enemy shurikens, so while you might be inundated with enemy shurikens all over the screen, as long as you’re facing in roughly the right direction, you can defend yourself simply by slicing judiciously.

Of course, that doesn’t work all of the time. By the second level, you’ll start facing ninjas that explode when you hit them, making your melee attack pretty much useless against them, and more foes start shooting fire, which is unblockable. Some of the tougher enemies toss bombs that explode on impact and absorb your attacks, essentially acting as a sturdy defense. Then the game tosses increasingly difficult foes, like the tengu that sweep across the screen as little tornados, spear-twirling warriors that seem to block your every attack, and magicians who surround themselves with flames. One of the bosses chucks bombs which then explode into more ninjas. By the third stage, the difficulty really ramps up to an incredible degree. All in all, it’s an incredible tough game, as you can only take three hits before dying, and you have only three lives before you need to restart the stage. Furthermore, dying completely devolves your weapons, making you exceedingly underpowered on a new life. This is either a death knell, or requires that you backtrack a bit to strengthen yourself. 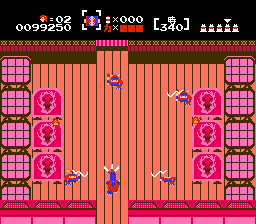 There are a couple of power-ups that can be stocked and used with the B button, including a cape that turns you invisible for a few seconds, and a lightning attack that damages everything on the screen. You can only use these a few times and they’re not exactly prolific, so you need to use them sparingly.

Maybe it’s the overwhelming difficulty that caused Nintendo to pass over this one. It’s still a remarkably fun game, though, and it’s not like the NES library didn’t have other monstrously difficult challenges. The music is pretty good, at least, even if there’s only really a couple songs you hear for a majority of the game.

Despite a re-release for the Game Boy Advance as part of the Famicom Mini series, there have never been any sequels. Yet it’s been referenced in a few of Nintendo’s more fan servicey works. The main theme makes an appearance in its original form in Super Smash Bros Brawl. One of the treasures in Pikmin 2 is called as “Cosmic Archive”, which is actually an FDS disk of Nazo no Murasamejou. Takamaru also appears in the Japanese-only Wii title Captain★Rainbow, along with other forgotten Nintendo characters like Hikari from Shin Onigashima, Birdo (Catherine) from Doki Doki Panic / Super Mario Bros 2 USA, Little Mac from Punch-Out!!, Tracy from The Legend of Zelda: Link’s Awakening, Tao and Mappo from GiFTPiA, the tiny little soldiers from Famicom Wars, Lip from Panel de Pon, the Devil from Devil World, the old man from the NES Golf game, and Gicchoman from Chibi Robo. On a strange, more pop culture-y note, Nazo no Murasamejou formed the basis for an episode of the 1986 Fuji TV show Onyanko Club. 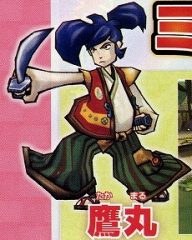 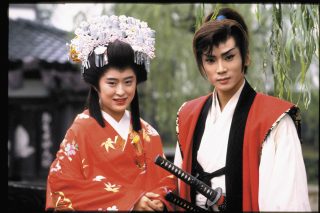 The game was also released on the Wii Virtual Console, but only in Japan. Nazo no Murasamejou also has been represented in two other games. Samurai Warriors 3 for the Wii features a mode called Murasame castle mode where you play as Takamaru. The game is also represented in the Wii U title Nintendo Land with a mini game entitled “Takamaru’s Ninja Castle.” It was finally released in America for the 3DS Virtual Console, under the name The Mysterious Murasame Castle though the game itself is unaltered from the Japanese original