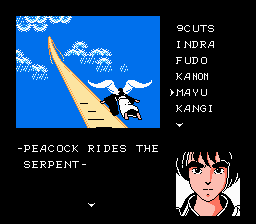 While little-known in the West, Makoto Ogino’s Kujaku Ou (or Peacock King) was a popular and critically-acclaimed manga series in Japan. Running from 1985 to 1989, with sequel series stretching to this day, it tells the adventures of the young Buddhist monk Kujaku (Peacock), who uses his spiritual powers to combat the demons, evil spirits and curses haunting modern-day Japan. Rooted in Eastern religion, history and mythology, but referencing everything from Christianity to vampires, it is part action, part horror, and part dirty humor. Initially following an episodic, monster-of-the-week format, the story quickly re-centered itself on its central character and his growing cast of friends, culminating into epic battles between the reincarnated Gods and Devils of ancient religions. Kujaku himself is named after Mahamayuri (Kujaku Myōō in Japanese), one of the Wisdom Queens of tantric Buddhism, whose wings he can call upon to fly. 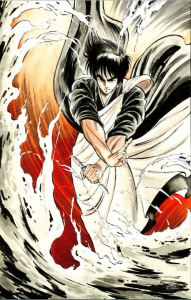 Color page from the manga

1988 was the year the manga evolved into a franchise, with the release of a first of two live-action films, an OVA and two video games. Each of these adaptations presents a distinct take on the source material, some being more loosely inspired by it than truly based on it, and in the case of the NES / MSX2 adventure game, it’s easy to understand why. The manga was originally serialized in Young Jump, a spin-off of Shonen Jump aimed at older readers, and, like many of its peers, routinely featured things like graphic horror, sex, or binge drinking, none of which fit into the family-friendly image Nintendo wanted to uphold (though the cover still features a mostly naked Asura). 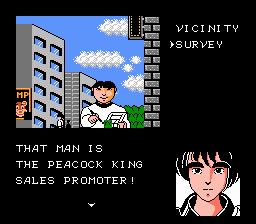 He’s having a good year.

The story is also more videogamey in nature, set up to justify the sort of step-by-step progression and frequent puzzles common to Japanese adventure games. It begins as Kujaku is sent out to investigate a series of unexplained attacks on local temples. He quickly find the culprits: the Iwato Clan, who seem to be trying to obtain various real-world artifacts – Kusanagi, the Seven-Branched Sword – that will allow them to resurrect their Serpent God. As he runs around trying to foil their plans, he comes to realize there is more to it than is immediately apparent. 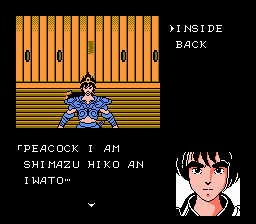 The game is a mostly traditional Japanese-style graphic adventure. You’ve got a picture of the current location in the top left corner, a menu listing different actions on the right, and a textbox at the bottom next to a portrait of your character. You go around talking to NPCs, examining locations and using various items to solve puzzles in order to progress. There is also, however, an RPG component. In certain areas, you will run into random encounters. They are fought in a turn-based manner, always one-on-one. There are no experience points or money, as you level up automatically at the end of each of the 8 chapters, and weapons and armors are either given to you or hidden in the field; you simply win Chi points, which are used to cast spells, all of which are available right from the start. 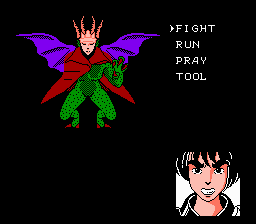 Certain spells are powerful against certain opponents – invoking the Goddess Kannon, for example, will instantly return most evil spirits to Heaven, but do nothing against monsters. Magic is expensive, though, and should be used carefully, as there is no way to gain Chi other than to fight. The battle system is largely based on chance; the same attack might do 4 points of damage one turn and 44 the next, and everything tends to miss a lot, even the most expensive attack spells. 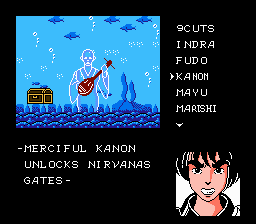 Worst of all, there is no healing magic or item whatsoever. In most chapters, there is a particular area where you can heal, and few enough battles that it isn’t a problem. In the game’s two dungeons, however, you have practically no choice but to run from every one of the all-too-frequent random encounters (which, thankfully, almost always works) so as to keep your HP for the boss battles. Even then, it’s entirely likely that you’ll have to restart the pyramid at least once or twice simply because the boss got in one or two lucky hits.

Just moving around said pyramid is cumbersome, as the game is controlled entirely through menus, so that you must select a command for every step you want to take and every 90-degree turn. 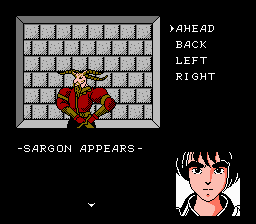 Just another battle to run from

The adventure segments, too, can be aggravating. Most graphic adventure games have moments where you’re left with no choice but to try every command at random in hopes of triggering an event; Kujaku-Ou makes it that much more tedious by having so many different options available to you at most times, including most of the spells you can use in battle, and text that scrolls too slowly. Some of the puzzles do follow an internal logic, but progress is generally very stop-and-go, particularly as you get further in the game. When it does move, the plot, characters and locations you visit, such as an underwater palace where the ghosts of a child emperor and his mother have been trapped for centuries, or the Japanese underworld where various Gods reside, can be very interesting, though it doesn’t help that the quality of the art is wildly uneven. 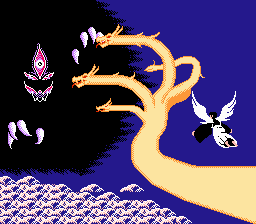 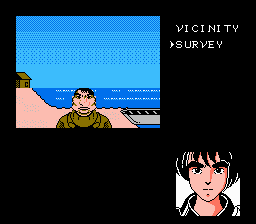 Music-wise, there are some nice soothing themes, a few annoying pieces, and not much variety. The standout is the title screen theme, which is actually a chiptune rendition of a song called Replicant Scandal, recorded by the Japanese hard-rock band Splash for the Kujaku Ou OVA. Not coincidentally, Splash were signed to Pony Canyon, whose video game branch published this one; the development, however, was handled by an obscure subcontractor, Graphic Research, who’d never made an adventure game before.

The game was also ported to the MSX2 computer the same year. It has deeper colors and better sound, but is otherwise the same. 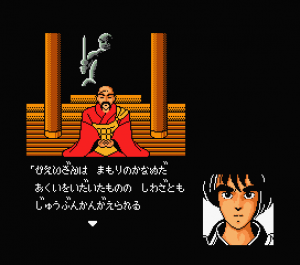 A streamlined, faster-paced version of the adventure segments appear as one half of a Master System game also titled Kujaku Ou, complete with superior art and music. It has gained a cult following in the West under the title of SpellCaster.

Thankfully, the other Peacock King games are all superior to varying degrees. There is worse than Kujaku Ou, but it remains a typically mediocre licensed product. At the very least, it’s a curiosity for fans of SpellCaster, the manga series or old-school adventure games. Should you want to check it out, there’s an English fan translation; it’s a bit rough, but workable.

Nicovideo – The original version of Replicant Scandal, as interpreted by Splash.

Romhacking.net – For the translation patch.