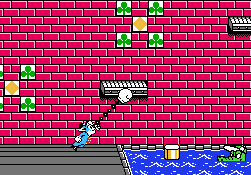 Today, Atlus is beloved for their Shin Megami Tensei and offshoot Persona series than anything else. They’re arguably one of the few reliable JRPG developers left, in that, you can almost always count on their developed work to be good, if not excellent (this is not always the case with games merely published by Atlus). In the 8-bit days, however, they experimented in a variety of genres for the NES. From the action/adventure trappings of Friday the 13th to conventional sports outings like Golf Grand Slam, Atlus’ earlier work often looks like it was made by a different developer. 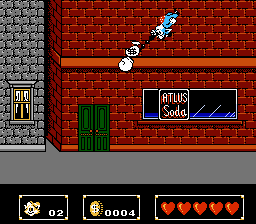 Most of Atlus’ NES output is arguably mediocre, but Rockin’ Kats stands above the rest. The game stars Willy, a bohemian cat who’s reminiscent of a young Tom Waits in feline form. Willy and his main squeeze Jill are looking to make it big in the New York City music scene. Bulldog crime boss Mugsy has other plans, kidnapping Jill continuously and taking her all over the country. Using his Punch Gun as both a weapon and means of travel, Willy must traverse across six levels of inspired cartoonish mayhem to save his dame and make short work of Mugsy. 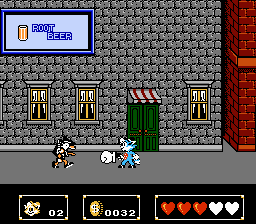 Right from the beginning, players are given a choice between four levels a la switching channels on an old-fashioned television set (a fifth channel is scratched out and will only open once the four other levels have been beaten). This backdrop implies that each level is really just an episode of an old cartoon show called ‘Rockin’ Kats‘ and fits right in with the game’s 20th century Americana backdrop. Dialogue exchanges are all stereotypical cartoon character lines, like Mugsy’s “I’ll get you next time!” after one of his henchman is defeated, and Jill’s “My hero!” upon being rescued. Each level always ends happily with Jill kissing Willy, followed by the word ‘END,’ typed out on the screen, one letter at a time. Tune in next time, folks, for more cat and dog hijinx! 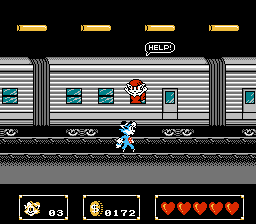 The four main levels are stuffed with cinematic setpieces. In “Downtown Street,” Willy saunters up and across skyscrapers while zoot-suited hounds shoot tommyguns at him. In “Sky Ace,” he rides atop a bi-plane through squadrons of plane-flying, bomb-dropping dog pilots. In “Playland,” he takes down plate-twirling pandas on ferris wheels while cruising on a sky ride. And in “Western Adventure,” he duels with tiny pups in an Old West town. With five or six sections per level, not every scene is epic, but Atlus’ dedication to the television motif is admirable. 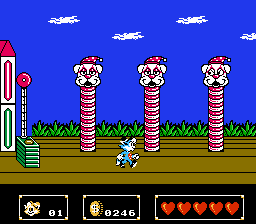 The Punch Gun is the heart of Rockin’ Kats. The Punch itself is a large fist that emerges from Willy’s gun, and is one part weapon, one part swinging mechanism and one part pogo stick. If you’ve ever bounced on Scrooge McDuck’s cane in Capcom’s DuckTales, the pogo stick will seem familiar. Punching little gangster dogs in the face shouldn’t be much trouble for anyone that’s played a platformer with a weapon. Using the Gun to swing, however, doesn’t come as naturally. When you shoot the gun at a platform, the fist attaches itself to the platform. From here, you swing with the ‘B’ button and press the ‘B’ button again to detach when ready. It’s easy enough to launch Willy forward across chasms or bodies of water, but there are sections where you’ll need to swing him backwards to reach an out-of-the-way platform or combine the swing with the pogo ability to move upwards. The more complex maneuvers never feel natural, and often result in trial-and-error deaths if you misjudge the momentum or timing of your swing. 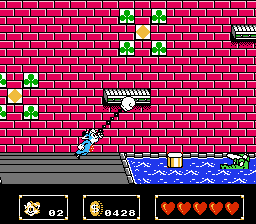 Willy can also purchase additional functions for the Punch Gun and other items from the Shop on the television’s main menu. The Bomb Blasts don’t have much range, but the spiky Hammer Punch provides extra power against bosses and the Twin Shot gives you ball projectiles, allowing for ranged attacks. Both of them are absolutely essential. The Shop also has Jet Sneakers, which allow you to hover slowly downwards after you jump, and are a great alternative to swinging in certain areas. 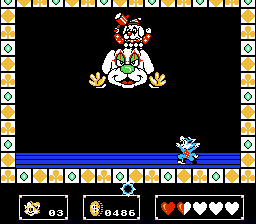 Potential swinging challenges aside, Rockin’ Kats is a fairly easy platformer. Enemies are generously spaced out and have predictable patterns. Extra lives and hearts that refill your lifebar are liberally placed throughout each stage. Even if you burn through all your Willies, you also have unlimited continues. Needless to say, Rockin’ Kats does not fit into the stereotypical “Nintendo Hard” chunk of NES games. 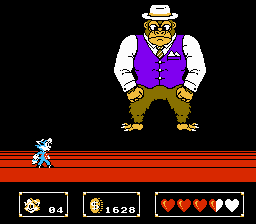 Each stage has a midboss and a boss, and their designs are wonderful and ridiculous. Examples include: the Bull Band, a jazz trio featuring a nasty lead singer who barks painful notes and emerges from one of three different holes like a whack-a-mole crooner; Clown Dog, a dog dressed in a clown suit who shoots projectiles atop a giant disembodied dog head; and Mugsy’s personal bodyguard, Mr. Kong, a large, swankily-dressed ape who shakes banana bunches from the ceiling and drops spiked balls from his sleeves. Strangely, every boss takes at least 20+ hits before they die, making the fights last upwards of a couple minutes even if you know what you’re doing. 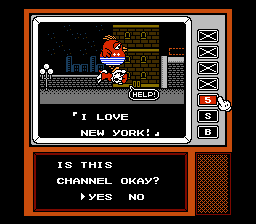 After you complete the initial four levels, the fifth level, “I Love New York!” opens up and you’re treated to a super long stretch through the Big Apple, complete with new areas and additional fights with every boss and miniboss you’ve previously fought. The final boss fight with Mugsy is surprisingly easy, in spite of the constantly scrolling platforms over a bed of spikes. Mugsy never stops moving, but if you have the Twin Shot, he goes down easy. 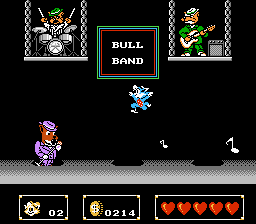 After you finally beat Mugsy to the literal moon, stare at Jill and Willy kissing each other yet again near a New York background, and watch the credits, you might think the game’s over. Wait long enough, however, and Mugsy’s face appears again, challenging you to one last fight. You’re stripped of any items, any money, and any additional lives beyond the two you start the game with. This extra secret not-featured-on-the-television-as-an-option level is by far the most challenging of the entire game. The level involves climbing and swinging from one platform to the next, clinging to dear life on a conveyor belt, and defeating Mugsy one last time. Do this, and you’re truly the rockin’est of all the cats. 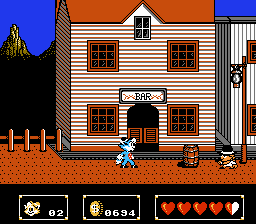 If you’re strapped for money or lives, or you’ve just beaten Rockin’ Kats and still want to pall around in Willy’s tattered shoes for awhile, check out the bonus games. These games are for gamblers: they have entry fees, but it’s hard to make money here. In “Basketball,” you swing from a small platform into one of several moving buckets labeled $25, $50, $90 and 1-Up. It’s difficult to swing into the buckets, but it’s surprisingly easy to bounce into the 1-Up bucket. “Roulette” shows Willy swinging like mad from a wheel of numbers. Stop on a number and you’ll receive either an amazing prize (3-Up!) or jack diddly. In “Pipe Toss,” you grab balls with the Punch Gun by holding ‘B’ and fling them into pipes with varying money amounts. The game costs the most to start ($100 a game), but grabbing and tossing balls into the pipes is simple, making it the only game with true money-making potential. 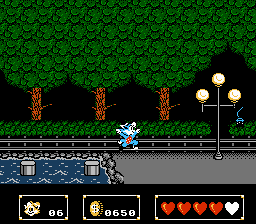 Any NES game released in the last three years of the console’s life had to compete next to better-looking games on 16-bit systems, but also, the NES’ super popular older titles like the Mega Man series, Castlevania, Contra, etc. The latter games were not only highly acclaimed, but they were released when the NES was the high rollin’ king in town. Rockin’ Kats had the misfortune of coming out near the SNES launch in North America, which likely had a hand in relegating it to forgotten status. Also, even though the platformer was a hot genre, the NES had scores of them. For many gamers who lived through the NES days, it’s easy to see how Rockin’ Kats could have looked like more of the same. 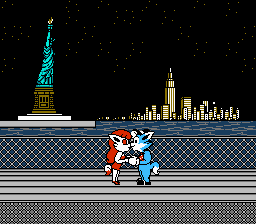 The cute character designs, charming aesthetics and Punch Gun gimmick make Rockin’ Kats stand out from the other platformers in the NES library, but behind the adorable window dressing is a B-tier platformer akin to Tiny Toon Adventures or Felix the Cat. The levels, while thoughtfully constructed, are sparse, with only the occasional enemy and extra item to look forward to. Remove the swinging function, and the game’s difficulty drops almost completely. Even with the swinging – which alternates between enjoyable and annoying – there’s little replay value, save for the bonus games which get old quickly. Rockin’ Kats is a whimsical adventure, but those looking for depth, replay value, or significant challenge probably won’t be impressed.