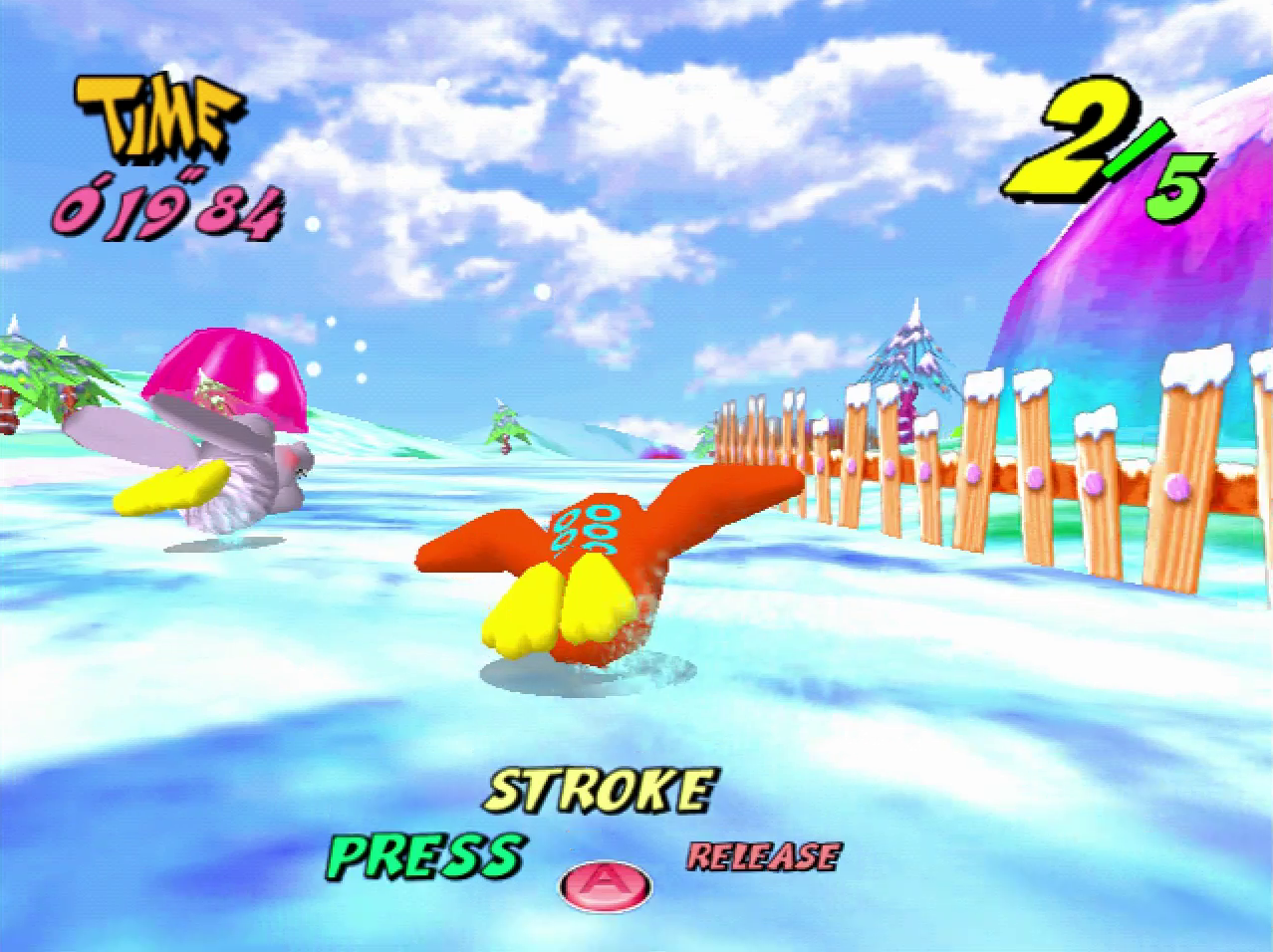 While the launch of the Sega Dreamcast offered a strong array of titles in North America and Europe, Japan had slim pickings with a meager four titles. Virtua Fighter 3tb was the clear winner of the bunch, but Pen Pen TriIcelon served a useful niche, being a racing game aimed at kids that was also the only game of the Japanese launch to offer four player gameplay. Pen Pen TriIcelon didn’t stand out as much in other territories due to stiffer competition, and the game was consistently pegged by reviewers as being too short and simplistic compared to other launch titles. These criticisms certainly hold water, but the sheer weirdness and accessibility of the game give it a unique appeal even today.

The game was developed by General Entertainment, who was also responsible for another Japanese Dreamcast launch title, Godzilla Generations. As a result of both games needing to make it to launch, Pen Pen TriIcelon was completed within a few months of intense development, which likely explains the game’s lack of content and a misleading tease of secret levels and characters in the instruction manual (there’s only one character to unlock in the final game). This tumultuous development period was also a catalyst for the formation of a new studio called Land Ho! by former Sega marketer Masanobu Tsukamoto and eight other employees from General Entertainment. Land Ho! would go on to develop titles such as  Crimson Dragon and Dragon Blade: Wrath of Fire. 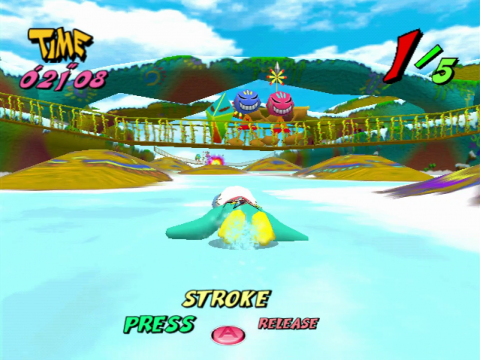 The Iced Planet is home to the Pen Pen, strange creatures that resemble penguins and are masters of ice-walking, belly-sliding, and swimming. Naturally, the Pen Pen made a sport out of their talents deemed the TriIcelon, where competitors can put their mobility skills to the test. This is about all the justification needed for a racing game, but the wacky cast of characters really stands out and gives the game some palpable charm. Sparky is the only racer who actually resembles a penguin, and then you have some truly bizarre designs like Sneak, a bipedal octopus Pen Pen, and the mysterious Hanamizu, who has a perpetually runny nose. The racers are all shown off via an introduction that does a great job of reveling in the inherent silliness of the game’s concept.

Pen Pen TriIcelon consists of four different courses with five races each. Each course offers an easy, middle, and long version, as well as a race where you have to compete with clones of yourself and another race where you have to beat Hanamizu one on one. The themes for the courses are Sweets, Jungle, Toys, and Horror, and each one has an owner. These course owners don’t appear in the game outside of the race selection and award ceremony screens, making their inclusion somewhat pointless. Their hypothetical removal may have actually been for the best, considering the owner of the Jungle course, Unga Pogo, is a blatantly racist caricature that puts an enormous blemish on the game’s otherwise excellent presentation. It’s a shame nothing was done to correct this during localization, considering the game did undergo a small degree of censorship for its North American release – the instruction manual shows the Sweets and Toys course owners, Mrs. Cream and Bambi Mask, without their smoking pipe and cigar, but both characters retain their smoking instrument of choice in-game, for whatever reason. 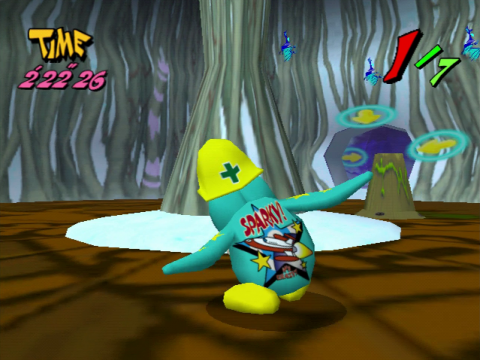 Races are divided between three types of movement – sliding, swimming, and walking, and mastering all three is the key to victory. Sliding and swimming are controlled in the same manner, requiring the player to press the A button in a consistent rhythm in order to maximize their speed. Despite the simple controls, there are some nuances to account for, such as knowing when to slow down (there’s no brake button), when to tap A faster to regain speed after a rough turn, hitting all the boost zones as you go, and accounting for the verticality of the course when swimming. The rhythm is easy to figure out and it feels rewarding to blaze past the competition once you’ve nailed it.

Ice-walking is a different beast entirely and is generally more difficult. When walking, the A button is instead used for jumping, and you’ll need to be ready to use the B button to tackle your opponents to slow them down. Getting tackled stops you dead in your tracks for several seconds, and missing a tackle attempt results in a long recovery time as well, so it’s not a maneuver you want to employ carelessly. Environmental hazards also come into play more prominently during walking sections, with some of the most annoying obstacles being the windmills in the Sweets course that push you around, and the spinning wheel in the Jungle stage that tries to prevent you from getting to the next room. The walking segments are generally the weakest parts of the game, since they’re much slower than the other two movement types and it’s all too easy to get stunned multiple times in quick succession by competitors and hazards alike. Transitions between movement types occur when players cross over a check zone, which gives you a few seconds to breathe as your Pen Pen proceeds to the next part of the race. 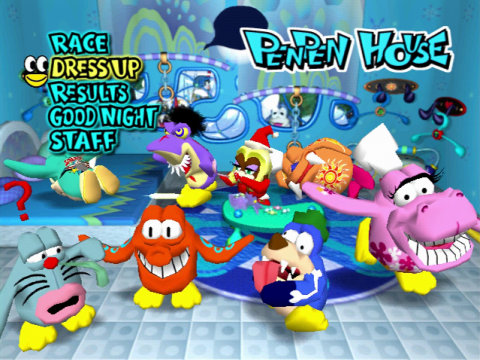 The courses offer a variety of obstacles and gimmicks to deal with, increasing in intensity and length as you go down the race list. Races are only one lap, but the courses end up taking as long as multiple laps in a typical racing game due to their size. The Sweets course has you avoiding sticky spots when sliding, and dangerous rocks and spiky mines when walking and swimming. The Jungle course tests players’ endurance with a long trek through a perilous cave and a sequence where you need to slide in a blizzard that obscures your view of the track. Some fun setpieces occur in the Toys course, like a swim through a river filled with giant shampoo bottles and a corridor lined with springs on both sides that bounce you around wildly. The most cohesive one is the Horror course, offering a drastically different tone and hazards like spooky skeletons, ghosts that slow you down, and a haunted house containing giant hands that pop out to smack unsuspecting racers. Aside from the Horror course, what you encounter when racing doesn’t really match the theming of the courses at all – the Jungle course barely even has a jungle in it, and the Toys course feels more like an amusement park.

Unfortunate racist caricature aside, Pen Pen TriIcelon’s presentation still holds up very well today. Everything in the game is extremely colorful and vibrant despite the relatively basic 3D models and textures, and every character has unique animations before and after races, which establishes their personalities. Winning races also unlocks new costumes to put on your Pen Pen, ranging from things like a samurai wig to a pair of high heels. The loading screens are a surprising highlight of the game as well, depicting the Pen Pen as they visit Earth and attempt to acclimate to its environment. There’s a variety of them to appreciate, and the Japanese version has a different batch of loading screens compared to the English release. Even the simple act of quitting the game provides the player with a cute moment where their Pen Pen of choice falls asleep to some soothing music. 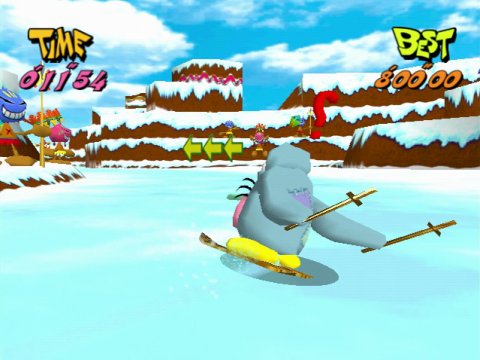 Much like its visuals, the music and sound effects alike are both vibrant and peppy, almost to the point of excess. Every character has multiple voice clips and they tend to get repeated frequently, making for some noisy races. During the walking segments, the music will change to a cacophonous, panic-inducing song once the player nears certain hazards, which is a great way to signify potential danger. Another cool touch is how the music changes each time a check zone is crossed and a new segment of the race begins. The announcer for the game is an absolute joy to listen to as well, with his loud, comically exaggerated voice that loves to flatter you whenever you’re in first place.

Pen Pen TriIcelon is ultimately over far too soon, seeing as how all 20 races can be won in a few hours and the only other single player mode is a no-frills time trial mode. Likely due to its desire to appeal to kids, the game is easy as well, as the racer AI tends to get caught in most hazards, or in Hanamizu’s case, even waits up for you if they get too far ahead. Racing against other humans is ultimately where the game’s lasting appeal lies and it’s not a bad choice to bring out if you’re looking for some four person fun on the Dreamcast.