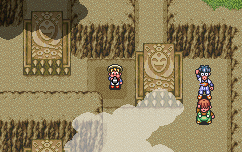 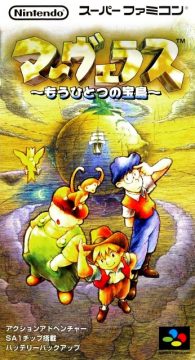 The new possibilities offered by Nintendo’s 16-bit system made a lot of developers enthusiastic to create innovative games. Quite a few did, though many disappeared right afterwards; a large number of studios responsible for Japan-only obscurities unfortunately often followed this pattern. However, Marvelous is not exactly one of those: The company we’ll be talking about here is none other than Nintendo itself. It also happens to be the first game designed by Eiji Aonuma, now world-famous for his work on the Zelda series. The game’s late release in the console’s time span – the Nintendo 64 was actually already available – meant it was never localized, but someone called “tashi” published an almost-complete patch that now make the game experience available to Western gamers.

The game’s title can be translated to “Another Treasure Island”, an obvious nod to Robert Louis Stevenson’s adventure literary classic. Indeed, the game’s mainly about pirates. It is said that, back when corsair ships still sailed the seven seas, the legendary Captain Maverick buried an incredible treasure dubbed the “Marvelous” on a desert island. But no one has actually ever found it, nor figured out what it exactly was in the first place. However, it seems three American-looking boys – Deon, Max and Jack – going on a school trip on Camp Island may be close to uncovering the treasure without even knowing it. 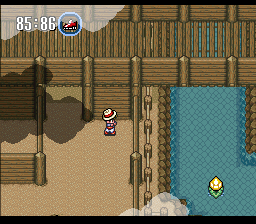 Following the opening cutscene, Marvelous starts on quite an unusual note as it’s already set in “Search System” mode, an interface somewhat similar to that of a point & click adventure game. The point of this system is to let you use a cursor to click the items or characters you want to observe or interact with, so that they can be brought up on the screen. You can use the Search System at any given time: It will bring it up a searchable element for interaction. This interface can feel a bit sluggish sometimes, especially when you simply want to talk to an NPC, but you’ll probably get used to it pretty quickly.

It should also be noted that the Search System interface make use of the Super Famicom’s higher resolution capabilities, upgrading from the usual 256×224 setting to a neat 512×448 output, and this indeed makes for more detailed portraits of the games’s cute characters. 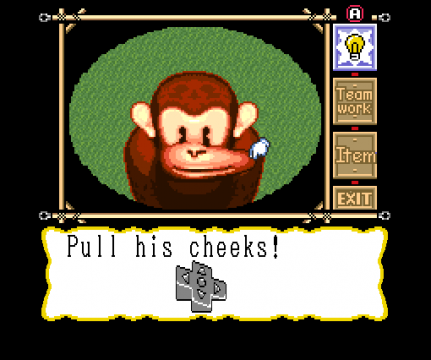 Most of the game itself remains classical 2D action-adventure exploration, during which you can control one of the three protagonists – the “leader” whom the others follows. You can switch the role of leader between them by “passing the hat”; which at first can only be done as long as they are on the same screen, but a bit later can be accomplished anytime with the help of a set of walkie-talkies. As this implicates, you can also split up the team in order to control each character independently, and a simple whistle blowing will get them back together if they’re around. The idea of constantly separating and gathering the trio is at the core of the game, and you’ll have to make use of that ability to manage to be on different places at the same time.

Of course, every character has his own characteristics, but they don’t really reside all that much in their physical abilities. They do somewhat influence how character controls feel – Deon is small and quick, Max is fat and slow, and Jack is tall and able-handed; but the character-specific items they can find around the island and carry is what’s really essential to the progression. For example, Deon gets a baseball he can aggressively throw at enemies, Max gets a tuba to go scuba-diving, and Jack gets a pair of boots allowing him to jump over pits.

Which make one of the game’s main mechanic – assuming control of a specific character – all the more essential; there are quite a bunch of tasks only one of the three protagonists can handle. However, you should always progress in groups when possible, as you’ll also need to work together from time to time to get past another kind of bigger trials. Indeed, there are larger obstacles or devices lying around that will require you to gather your entire team for a display of force. Gameplay-wise, they’re rarely more than simplistic mini-games or button mashing sequences, so the only thing you’ll need to worry about is having your whole team on the spot. 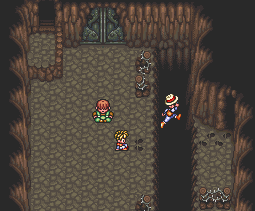 It’s also obvious the game takes a lot of inspiration from The Legend of Zelda: A Link to the Past, an influence Aonuma himself acknowledged. The progression in Marvelous is rather similar and it wouldn’t be a surprise if the development simply reused the third Zelda game’s engine. The most noticeable difference, though, is the clear emphasis on puzzle-solving rather than combat, which is a most welcomed fresh take on the usual action-adventure formula of the era.

The problem, however, is that the puzzles are somewhat uneven. The whole time-traveling mechanic used in the second chapter, for example, is pretty fun and engaging, but a lot of the smaller riddles are often uncreative overall and sometimes almost purposeless. Many of them are no more complicated than making you pick something with the Search System, then do what you’re obviously required to do with it, which is quite problematic for what is, before all, an adventure game.

But whatever you might think about the puzzle design, some of the situations you end up in are crazy as hell. From matchmaking penguins for their mating season and confronting body-snatching fauna using salt water, to playing tug-of-war with a gang of mischievous monkeys and creating a bridge out of mice using fishing rod tricks, the game is full of unusual quirks. If you’re so inclined, you can also poke your teacher’s boobs while using the Search System. No kidding; just go ahead and witness her reaction.

The game is also rather short. Too short, probably, as the game would clearly have benefited from a bit more of content. The characters are cute and funny, the places you get to visit are colorful and varied, and the soundtrack is quite enjoyable, but five short chapters really aren’t much. 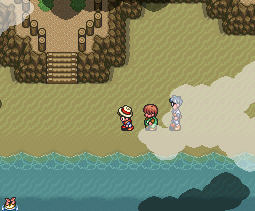 While Marvelous might leave some players a bit unsatisfied by its sometimes lacking puzzle design, it’s a charming game and a nice adventure-flavored twist on A Link to the Past that some other players might even consider more interesting than the original model. It might be flawed, but Aonuma’s daring debut as a designer is definitely worth a try.

These versions share some of the main title’s game mechanics but also are quite a bit different, and actually act more as side stories connected to the main adventure. Gameplay-wise, they basically are video game version of what the Japanese call “stamp rallies” – a pop culture phenomenon in which people are invited to complete a sheet of paper by getting it stamped at various locations, as if collecting the stamp marks. It also makes use of SoundLink, a Satellaview-exclusive service that broadcast audio content – in this case, it provided a special soundtrack and even voice acting. This content would have been lost if it wasn’t for some old TV recordings that did survive to this day. 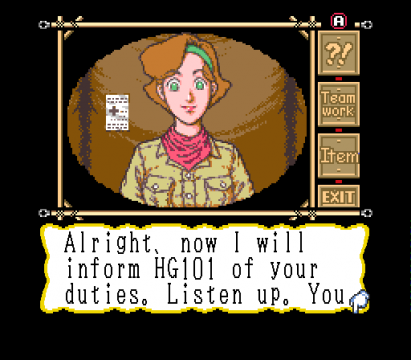 The counselor from Camp Marvelous

As obscure as all of this may sound, Nintendo didn’t just forget about this part of their history. A sidegame involving GBA connectivity found exclusively on the Japanese version of The Legend of Zelda: Four Swords Adventures for the GameCube – called Navi Trackers – pretty much is an updated version of the Satellaview Marvelous games. Navi Trackers, having enough storage space and technical prowess, can perform this and change things up more on the fly without a static linked broadcast. The action itself takes place on the players’ GBAs, where it acts sort as a Zelda-fied take on the Marvelous TA map(s).It’s built for multiplayer, and it shares with those the whole “stamp rally” concept. 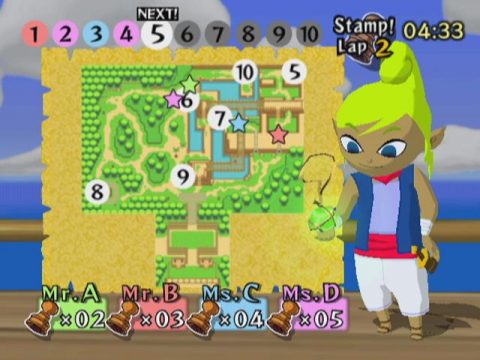 Even if you don’t have friends with you, you play against a CPU Tingle. Instead of switching kids out for their special abilities, the Links can find and switch out with special item they have in their possession like in Four Swords/Four Swords Adventures. The TV shows where the stamps are on a map. This takes away the clue-searching aspect of Marvelous in exchange of players scrambling and fighting over who can get to the next stamp first. Many characters from Wind Waker pop in during bonus or special periods of the game. Tetra herself serves much like the counselor in Marvelous and is the main announcer. The game features voice acting as well, replacing the live broadcasts from the BS Satellaview. Even more surprisingly, unused content unearthed from the disk revealed that Navi Trackers probably was initially thought up as an actual remake of the BS installments, seeing how it contains a 3D model of the camp instructor and maps straight out of Time Athletic. 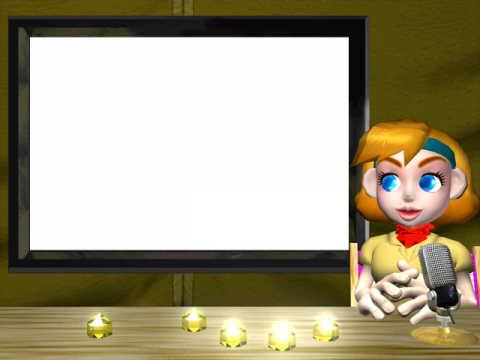 Unfortunately, much like Marvelous never made it outside of Japan, Navi Trackers eluded an English release as well. It was initially going to be included, renamed as Tetra Trackers, but was cut before release. Marvelous was previewed in an issue of Nintendo Power, scans of which are below:

Thanks to Neil Foster for the info on Tetra Trackers and the Nintendo Power scans.