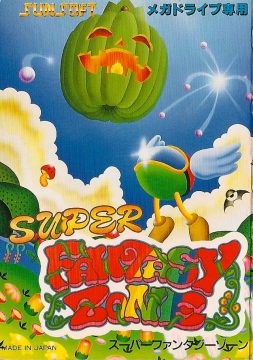 Fantasy Zone II and Fantasy Zone Gear weren’t bad by any means, but they both ran on hardware quite inferior to the original arcade game. Released in 1992, Super Fantasy Zone for the Genesis is the first true sequel that not only matches, but surpasses its predecessor in aesthetics, with gorgeous graphics and an insanely catchy soundtrack. It was developed by Sunsoft, who had previously worked on the Famicom port of the first game. 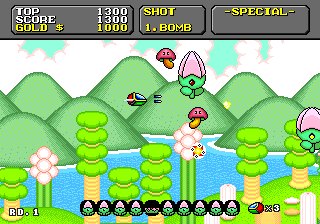 During the entire time that you play, you forget about the Genesis’ limited 64-color palette and marvel at the pastel glory. The music is some of the best composed for the Genesis. The opening cinematic story tells a traumatic story, as Opa-Opa sets off to destroy the Menon empire to avenge his father’s death. For the most part, the game is exactly the same as the original Fantasy Zone, just with new enemies and levels. These include Picknica, Kazarne, Niagro, Risscave, Grandiuss, Le-Picker, Aflouricious and Menone.

There are a fair bit more weapons to buy this time around, including the incredibly useful four-way homing missiles. Also, special weapons (like the classic megaton weight) now have their own button, so you can save them for the right moment. There are certain “gimmick” items you can purchase for some stages. One level is completely cloaked in darkness, so you’ll have a much easier time if you buy the headlights. Another has electrified floors, requiring that you purchase boots if you want to land on the ground. 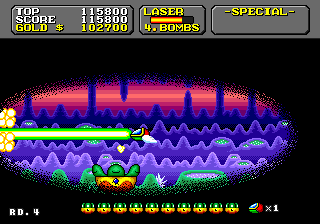 Since this was developed specifically as a home console release, the difficulty is tuned so it’s challenging without being frustrating, and the rapid fire option is most definitely welcome. Even the scrolling has been fixed so it’s easier to see what’s in front of your ship.

One of the coolest parts of the game is the tie-in with one of its Sega arcade brethren – the final stage has a checkerboard pattern on the floors and ceilings, an homage to Space Harrier. You can also enter a secret code that lets you play the game with the soundtrack from the original Fantasy Zone. 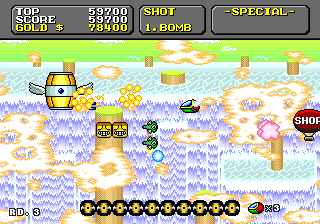 Unfortunately, the biggest travesty of Super Fantasy Zone is that it was never released in America, only in Japan and Europe. Regardless, the game defaults to English anyway if you’re playing on an American Genesis.