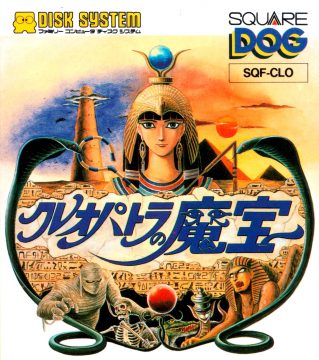 Cleopatra no Mahou (“The Magic Treasure of Cleopatra”) is an adventure-RPG hybrid from Square. You control a young man named Daisuke Kusano, the son of a famous archaeologist who has disappeared while exploring Egyptian ruins. The only way to rescue him is by finding the Tears of Isis, which can resurrect the spirit of Queen Cleopatra and save Daisuke’s father. 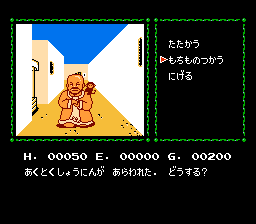 Some of the areas, including the town, are presented as relatively simple mazes. Much of the game is like a standard first person adventure game, where you pick a command on a menu and then click on the screen. However, every time you choose a command, there’s a random chance that you’ll be attacked by an enemy. These battle scenes are turn-based and greatly simplified – there’s nothing you can really do but attack, and victory is determined largely by both your experience level and equipped weapon. You can try to escape, but you still need to fight quite a bit anyway. While some items can be found during your exploits in the ruins, many also need to be purchased from the town. This requires money, which is obtained by killing enemies. In other words, the RPG elements don’t really add anything to the game other than tedious grinding. Take away all of the combat, and it’s a pretty short game.

Overall, there’s not really much to Cleopatra no Mahou, but as a standard adventure, it’s not too bad, and the Egyptian setting is pretty cool, especially the enemies you fight. They’re fairly large and actually animated – the monkey on the shoulder of the bandits is surprisingly cute. The constant loading, as with many FDS games, really drags the pacing though. 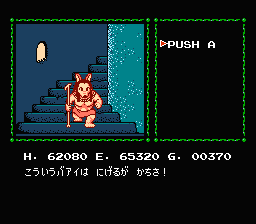 There is a bug that can greatly help things out, if you invest the time into it. Normally, the highest character level is 12, with 49,152 experience points, which grants you 2,000 HP. However, if you get 65,535 experience points (the highest number of an unsigned 16-bit integer), and stay at an inn, then your HP will climb astronomically to 65,535 too!

Like most early Square titles, it’s most interesting for the staff that went on to bigger things, including composer Nobuo Uematsu (Final Fantasy), and director Hiromichi Tanaka (Xenogears, Chrono Cross). Some graphics were done by Takashi Tokita, who later went on to direct Final Fantasy IV, Chrono Trigger, and Parasite Eve.

This review is from The Complete Guide to the Famicom Disk System. Please check it out if you want to read about more obscure RPGs and numerous other Japan-only games!