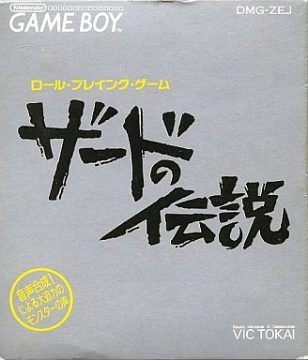 On the surface, Vic Tokai and Graphic Research’s Xerd no Densetsu (“The Legend of Xerd”) seems like a typical JRPG for the Game Boy, similar to Final Fantasy Legend or Aretha. But beneath the exterior lies one of the most ridiculous, absurd stories seen in the genre, and it’s not entirely clear whether it’s meant to be a parody or is just the result of some particularly slapdash design.

The “Xerd” of the game’s title is a hero who defeated evil 800 years in the past. You control another character (default name Jake), prince of the one of the kingdoms, to defeat his evil twin brother by hunting down the reincarnation of the legendary hero. Fairly early on in the story, you’re joined by a young woman named Mahna. When adventuring together and you reach a certain town, the people all of a sudden proclaim that the duo should be married (due to a message from God, they say), and the couple just goes along with it. In the next town, surprise, she’s pregnant! She gives birth to a young boy, who the priest names (gasp!) Xerd. As it turns out, their son is actually a reincarnation of the hero they’ve been looking for! When they dip him in a certain fountain, he suddenly becomes fully grown (and is even fully capable of speech), so he joins along with his father and mother to complete their journey.

The casual way in which major events just sort of happen is insane, but there’s other bits of strangeness to it too. When you defeat enemies in combat, they scream with a digitized yell, something that was apparently so impressive that it’s advertised right on the game’s box. The town names are a little on the nose – the town of “Doctor” is filled with doctors, the town of “Magician” is filled with magicians, and the town of “Between” is on the border of two kingdoms. There’s also bits of silly dialogue – after defeating one particular king, who was actually just a monster in disguise, one of the villagers just casually states “New king wanted.”

There was a sequel to Xerd no Densetsu, also for the Game Boy, though in lacking its bizarre scenario, it never quite made its mark on the Japanese RPG scene in the way its predecessor did. Incidentally, the twist of that a prophesized warrior is actually the offspring of the protagonist rather than the protagonist themselves was also used in Dragon Quest V for the Super Famicom, released the year later in 1992, though the concept is far better executed there.