Jason Frudnick was your normal teenaged kid living in a seemingly average suburban neighborhood, who happened to have a pet frog named Fred. Unbeknownst to him, one day a chain of events would occur to forever change his life. As he was playing around with Fred, the frog spontaneously decided to hop out of its glass cage and flee outside, causing Jason to give chase. Fred made his way to the radioactive container in the middle of Jason’s yard, which caused him to grow to freakishly huge size. He then proceeded to jump down the nearby huge hole in the ground that led deep under the earth. Jason, completely unconcerned about why there’s a giant radioactive container sticking out of his front yard or how deep the unusually large hole is, continues his chase and follows the enlarged Fred down the hole. Somehow surviving the fall, Jason finds himself in a cave of some sorts. There was no sign of his dead frog, yet he discovered a shiny new battle tank just sitting there, as if it were waiting for his appearance. Again, not one to ask questions, Jason put on the battle armor inside the tank and drove out of the cave into the vast underground world outside, determined to get his beloved frog back. 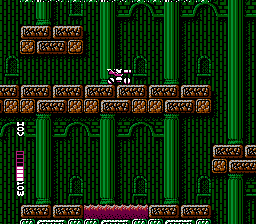 And it was that preposterous story that marked the beginning of one of the greatest video game adventures around, Blaster Master. Known as Chou Wakusei Senki Meta Fight (“Super Planet War Records: Meta Fight”) in Japan, Blaster Master is an example of the cross-pollination of two different styles of gaming. Part of the game is a straightforward, action side-scroller. In these parts, you control your tank, Sophia the 3rd (or the “Metal Attacker” in Japan), armed with a potent cannon that can fire in front or above, and a jump that can rival Super Mario’s. In a unique feature for platformers at the time, you can actually choose to get out of the tank and fight on foot, though this is usually the quickest way to get your ass handed to you, since your gun sucks and you’re extra weak in the overworld.

At first, your tank is very limited as to what places it can reach, and requires the assistance of equipment expansions in order for progress to be made. This is where the game’s second aspect comes in and serves as the primary reason you’ll need to get out of your vehicle. Throughout each area’s main sections are doors small enough for only a human to fit. These doors lead to overhead, dungeon crawling sections (similar to the original Legend of Zelda or Link to the Past). Most doors lead to dungeons that are dead ends, and may only be useful as quick power-up spots, but one door contains the lair to the area’s boss, and is regularly hidden in the area’s most out of the way location. Defeating the boss earns you a new part for Sophia, allowing it to bypass whatever obstacle currently prevents you from going to the next area. 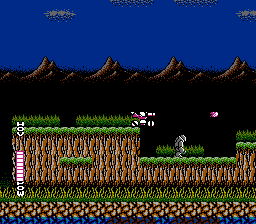 Your character has a separate health meter from the tank, and a gun meter in the overhead rooms. Your main gun starts off pretty weak, but by collecting the appropriate icons, it can be made significantly more powerful as your gun meter fills. Getting hit however, not only causes you to lose health, but a unit of gun energy as well. You also have a secondary weapon in the form of a close range, yet powerful grenade, useful for dealing with stronger enemies when your main gun is in a weakened state.

Blaster Master‘s presentation of platform jumping and “shoot everything that moves” style play, combined with exploration-focused adventuring, caused it to become one of the more popular cult hits among gamers. To capitalize on Blaster Master‘s appeal, its creator, Sunsoft, released a number of follow ups. They contained the basic gameplay elements described above, while adding their own little expansions and/or changing some existing things. Each have varying levels of success as far as playability, but none were quite able to recapture the popularity of the original. As of this writing, there are five games in the Blaster Master series. 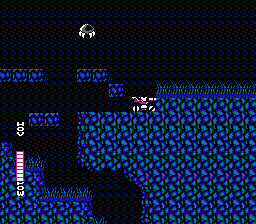 When Blaster Master was released in the late ’80s, games that attempted to blend multiple genres weren’t all that common. Frankly, they still really aren’t today. Blaster Master pulled it off superbly, and the only other game I can think of at the time that matched its effort is The Guardian Legend. As described in detail from the article intro, you basically spend your time in each area looking for the door leading to the boss’s dungeon. Then, after killing the boss, you use the new ability your tank receives to search for the entrance to the next area. To keep things delightfully fresh, Blaster Master has some aspects that break up this rudimentary style of play. Several areas are non-linear, meaning the entrance to the next area may not even be in the area you’re currently in, as some areas have multiple entrance doors. For instance, once you beat the Area 3 boss, you have to do some drastic backtracking through already visited areas to find the entrance to Area 4.

Blaster Master also likes to occasionally force you out of your tank for certain stretches of the area’s overworld parts. In one of the game’s harsher moments, when you initially enter the water stage, Area 5, you find that your tank is ill equipped to maneuver underwater. The minute you jump in the water, it promptly sinks to the ocean floor like a rock. Eventually, you have to get out and swim through a good portion of the area to the boss’s dungeon and, if you survive the boss, go all the way back. Not to mention while on the way, you have to deal with annoying humanoid/fish enemies that not only move around better underwater, but have better guns than you. 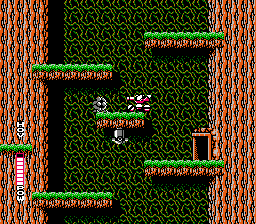 The graphics in Blaster Master are very nice looking for an earlier NES game, featuring an impressive level of detail and animation. Each area has its own visual theme, from the typical fire, water, ice, etc. world look, to the more unique like Area 2’s old English castle theme. To detract from this a little, things tend to slow down when more sprites appear on the screen, a problem shared by many other NES games.

Blaster Master also has a great soundtrack, featuring some technically advanced sounding NES music. The most notable thing about the music is how each song conveys the mood and atmosphere of each area with uncanny accuracy. The best song in the game, Area 1’s theme (what could be regarded as the “Main Theme”), has a beginning part that perfectly matches the area’s short intro scene of you taking off out of the cave into the the actual level, and a follow up melody that does much to inspire you to explore the strange world you see before you and find that damn frog of yours. It was composed by Naoki Kodaka, who had previously worked on some of Sunsoft’s previous Famicom titles, but this is the first one of his that really stands out. He’s the one most responsible for the distinctive soundtracks in Sunsoft’s later games, including Batman, Gremlins 2, and Journey to Silius. 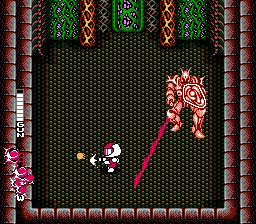 Blaster Master will provide you with plenty of challenge. To beat the entire game, you’re only given three lives with no opportunity to earn more, and a short supply of credits. Depending on your preparedness (meaning: gun level), bosses can be tough customers, though several can be easily bypassed by taking advantage of the infamous grenade pausing trick (simply hit “start” when the grenade is exploding). On top of it all, those not familiar with the locations of where things are will probably get lost easily, and the traps and enemies spread around each area will be more likely to kill you during the search for the next destination.

Blaster Master is simply an excellent game. As a testament to its greatness, the game remains just as engaging as it was when it came out all those years ago, making it a strong candidate for one of those rare games you’ll pick up and replay through every now and then.

Gameplay-wise, the difference between the English and Japanese versions are minor, just a tweak or two to some level designs; however, Meta Fight has a completely different story. To summarize, your character is Kane Gardner, who uses the Metal Attacker, a tank developed on a scientific facility on the satellite Nora, to fend off the invasion of planet Sophia by the evil emperor Goez. Since, unlike Blaster Master, Meta Fight lacks an intro sequence, the only indication of the story difference in game is from the Area 1 beginning animation, where the tank takes off from a base-like structure rather than from a cave. However, some of the ending graphics are different, like the shape of the alien base as seen from the distance. The American ending adds the protagonist’s frog sitting next to him on the tank. The final screen of the Japanese version features chibi rendition of the hero, as well as the heroine Jennifer Cornet, a Nora scientist, who only appears here in the game (she’s in the manual and on the cover, though).

Hidden (and disabled) in the game ROM is an item called “Spike”, which was assumed to let either the tank or Jason walks on spikes. A similar item was found in the later Blaster Master: Overdrive. There’s also remnants of a title screen logo indicating that the English release was planned to have kept the Meta Fight name.

Meta Fight was later re-released in Japan on the PlayStation, as part of Sunsoft’s memorial disc compilations. It’s just a straight emulation. 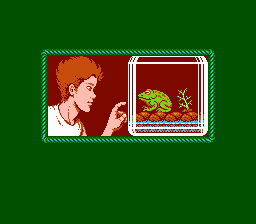 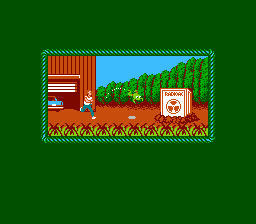 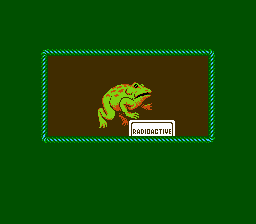 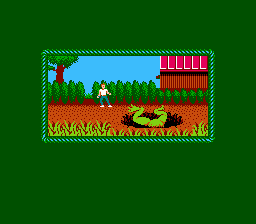 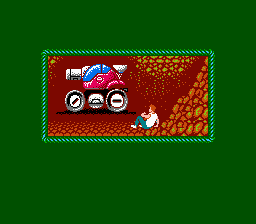 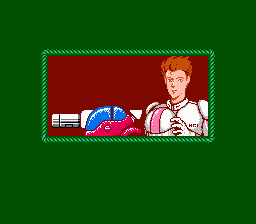 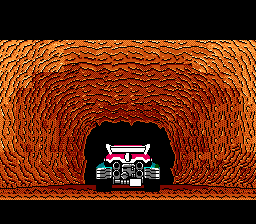 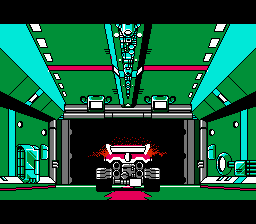 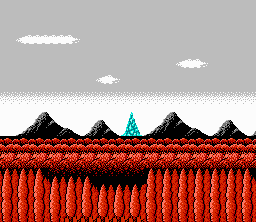 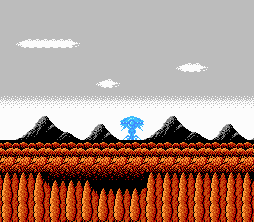 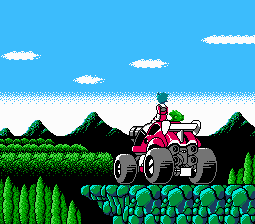 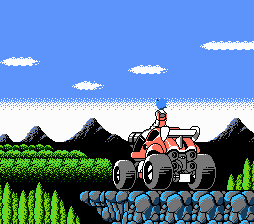 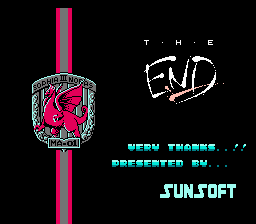 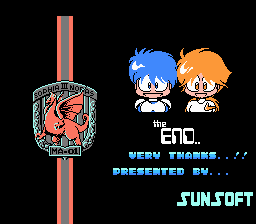