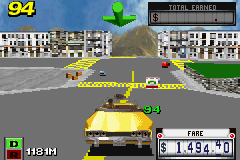 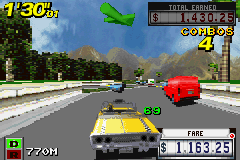 This version is pretty much just the arcade version of Crazy Taxi, miniaturized for the grossly inferior handheld. The gameplay is the same as the arcade and the game is truly in 3D thanks to Graphic State’s engine developed for it. So what is wrong with this version? The Game Boy Advance itself is to blame. You see, the hardware just can’t handle this technology and it shows. The choppy framerate ruins any real sense of speed, which is disappointing for a game series that is associated with going fast. The dips in framerate aren’t the only problem with this game. Customer placement is an issue that isn’t as noticeable at first. Compared to console versions, there is about 1/5 the amount of customers on the field. This seems reasonable as the game is basically a stripped down version of it’s console brother, but it serves as a major problem. You can drop off a customer at their destination and realize that there is no one else around the general area. This is unacceptable for you are already strapped for time, and this version makes it seem like you spend most of the game searching for customers instead of actually driving people around. 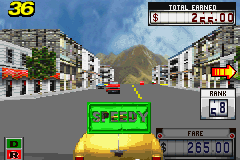 Despite these complaints, the developers really tried their best in cramming as much as possible into this game. The music is unlicensed rock that is reminiscent of the soundtracks of it’s console brother and the voice samples are surprisingly intact, although they’re few in number and repeated quite often. They even got the moves and the Crazy Box in there, although the there are much fewer mini games. All in all, it’s an alright game only marred by it’s choppy framerate and terrible customer placement.