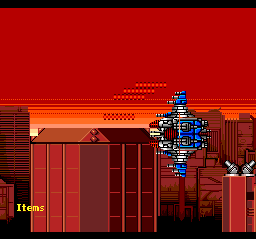 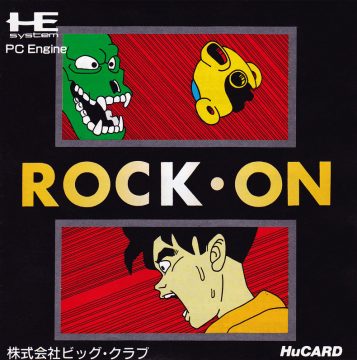 Rock-On is one of many shoot-em-ups released throughout the life of the PC Engine. While the system has an impressive library of high quality examples of the genre, Rock-On falls short. Even with the massive inflation of PC Engine game prices over the past few years, brand new copies of Rock-On can be found on Ebay for around $20. When a PC Engine shooter is so bad that an unopened one costs less than the US release of Deep Blue, it’s a bad sign.

Shooters like Rock-On typically don’t have a lot to offer in the way of a story or engaging characters, which is fine. As games focused purely on action and cool looking enemies any extra plot information is appreciated but unnecessary. With Rock-On, however, what little is going on with its setting and characters may have been better left unwritten thanks to the terribly awkward English text crawl that opens up the game. It’s a strange choice for the game’s introduction and ending since most of Rock-On‘s text is in Japanese (except for some names). Manjyudo had also developed the ambitious but flawed samurai action game Jinmu Densho Yaksa in collaboration with Wolf Team a few months before Rock-On would be released. It’s probable they were planning for their second game (and Big Club’s second as a publisher) to get released in the US with the launch of the TurboGrafx-16 as both were actually released within a few days of other. Unfortunately for them, the game stayed in Japan, only one more game was made under the Manjyudo name, and Rock-On was the last game published by Big Club. Still, Rock-On is a rare thing on the PC Engine/Turbo Library. The system has many shooters on it of varying quality, but few are as bad as Rock-On, which achieves a Deep Blue-esque level of blandness despite the more colorful aesthetic.

The premise is that a guy named Mr. Zella is going explore unknown reaches of space in search of untold riches while under the scrutiny of constant mass media coverage. Most of the ancient civilizations and ruins of the game turn out to be human in origin, with wrecked cities composed of the typical post-apocalyptic urban sprawl one would see in countless games throughout the 1980s. The game’s enemies and bosses are unfortunately just as uninteresting. Three of them borrow heavily from the R-Type series while the other will be very familiar to Gradius fans. The cocky lizard man on the game’s cover unfortunately does not appear anywhere in the game, though it may just be an off the mark rendition of the game’s final boss. Despite taking inspiration from R-Type, one of the more uniquely dark series of the genre, Rock-On‘s atmosphere is overly cheerful and optimistic, with lots of brightly colored enemies and chipper background music set against the game’s bland background graphics. 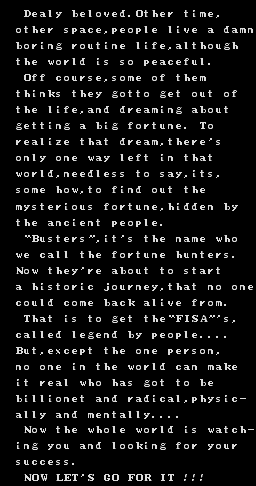 Without the tightly focused atmosphere of Alfa System’s Download, the crazy scenery of Dual’s Psychosis, or the intensity of Sting’s Psycho Chaser, Rock-On brings nothing to the table compared to other PC Engine shoot-’em-ups besides its grammatically amusing English introduction and ending. The game was released and immediately forgotten in the face of its contemporaries, receiving mostly negative reviews. The most generous take on the game, by Gordon Houghton in the November 1989 issue of Computer and Video Games, however, does praise the game’s high difficulty and bright color palette. When Nintendo aggressively attracted a wide range of publishers to seek out and produce versions of their games for the Wii Virtual Console, however, no one cared to recover Rock-On while other obscure outliers like Alpha Mission II (Neo Geo, 1991) and Choutetsu Brikin’ger (Neo CD, 1996) made the transition.

Rock-On is also a bit buggy. After extended play it’s not uncommon for some of the game’s graphics to become corrupted or stay on the screen after the player has changed levels or lost a life. The game’s weapons are not well thought out either. As an example, one of them creates a force field around the player’s ship similar to the shield found in the Gradius series. It renders the player invincible for a while, which is great, since one can just ram into enemies to destroy them. However, while this shield is up enemy projectiles won’t harm the player’s ship but will instead knock it back a bit. Since the majority of the game requires some tight maneuvering around buildings and through caves, it will often make the game even more difficult because one now has to work even harder to avoid being hit by enemy fire thanks to the large bubble around their ship lest they be slammed into a wall and destroyed anyway. There is also a single use weapon that sends a shockwave across the screen that is meant to destroy any enemy it hits, but somehow always manages to miss one or two, making it less useful than the game’s more conventional equipment.

Mercifully, the game only has four levels, so the scenery is nicely spread out. The last level has very little of interest happening in it though, and is more of a long escape sequence after the player has acquired the treasure they have been seeking (referred to in the game as the “FISA”). Visually, however, the FISAs are a bunch of large gems and old coins which the player can grab a large number of at the start of the final level. This is more challenging than it sounds as the hit detection of the ship is not particularly generous when it comes to picking them up. The same cannot be said for the game’s enemies, however, whose weapons need only to graze the player’s ship to destroy it. Additional weapons can be picked up and then immediately equipped, but like in the Thunder Force series a few can be kept at the same time and switched between at will. There’s a nice, Gradius-like variety of weapons to find, but unfortunately only a small number of them are actually useful outside of very specialized situations.

While Manjyudo may have had good intentions with Rock-On, and both R-Type and Gradius are excellent genre choices to imitate, even the most starved shooter fan will have trouble finding something to like here. The game’s designer, Osamu Kunimasa, would have one more run in with the this type of game by directing the much more effective 2005 remake of Hudson’s Star Soldier. Manjyudo would also create a very good port of the Nichibutsu shooter Formation Armed F in 1990 in collaboration with Big Don (could this be Big Club, renamed after the shame of publishing Rock-On?). The most important member of the Rock-On‘s team, however, is Takane Ohkubo. While the soundtrack here is not her best work, it’s also only her second after 1988’s catchy Bakutotsu Kijutei: Baraduke II music. She would go on to also compose music for Mario & Wario and Zombie Nation as well as contribute to the Hal Laboratories cult game Metal Slader Glory. Most importantly, however, she was one of the directors of Jinmu Densho and the designer of Zombie Nation as well, showing that her involvement with a game as unimaginative and awful as Rock-On is an anomaly.