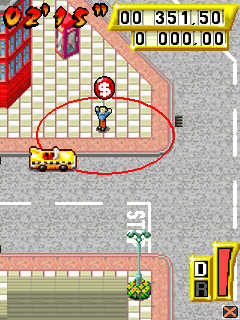 It was just a question of time, and in 2009 Crazy Taxi got finally ported over to cell phones – twice. The first version is just another downgrade from the first arcade game, which runs about as choppy as Catch a Ride on GBA, but in contrast to the version on Nintendo’s handheld, here the cars are full 3D polygonal models, too. The music only consists of two midis that try to emulate the style of the artists that made its big brother so intense, but they’re much too short and thus get on your nerves fast. 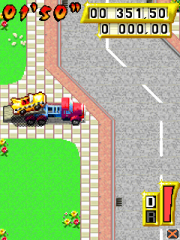 More unique is the other game, which translates the classic Crazy Taxi gameplay onto a flat plane, viewed in 1/4 top-down view. It is mostly based on the first game, too, but it takes place in a new town and adds the Crazy Jump from Crazy Taxi 2. Gena is not in this version, leaving three playable characters, which here symbolize the difficulty settings. Unfortunately, the game distinctively lacks speed and verticality, making it ultimately boring. The generic music unworthy of a Crazy Taxi game does the rest. 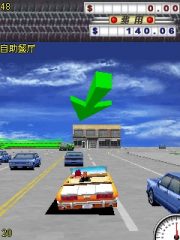 Like any mobile game, both versions also suffer from bad controls.

With the rise of free-to-play mobile gaming, the popularity of short, arcade-y games made to be played in short bursts suddenly skyrocketed once again, prompting several industry old-timers to join the party started by small independent teams. After a long period of the typical Sonic-milking with some nice oddities like The House Of The Dead Overkill: The Lost Reels spread in-between, Sega finally decided to do The Right Thing and resurrect Crazy Taxi for this new, already over-saturated market with Crazy Taxi City Ru$h, a free-to-play mission-based quasi-endless-runner designed by series creator Kenji Kanno himself along with the company’s own mobile-centric division, Hardlight. 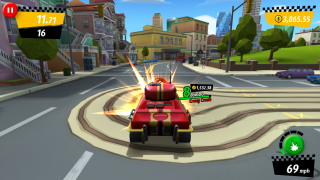 Don’t be fooled by the game’s extensive use of usual freemium elements like recharge times, daily missions, bonus-granting character customization (or in this case, taxi pimping) and timed events, though, because under this dreaded hood lies raw, classic Crazy Taxi action with all the tricks and, well, craziness that made the older games so memorable, except with simplified controls and limited movement. City Ru$h is a first in the series as due to its mission-based nature there is an actual objective besides making money, and that is completing the multiple tasks given by the original games’ cabbies (who now own their own taxi companies), that often revolve around a short, silly story and the one-time customers involved. These objectives are extremely hard to accomplish from the get-go, though, so it’s advised to upgrade your cab before you tackle them, but to do so you need money and to get money you must play other missions (or you could, y’know, <i>purchase it</i>), so yes, in the end it really it all bogs down to making crrrrrrazy money, just like old times. 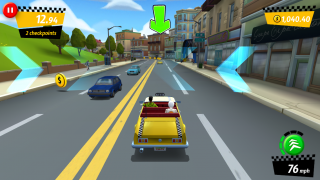 Bay City, the new home to your crazy driving antics, is rendered in a goofy cel-shaded style that not only guarantees that the game runs in most devices but also complements the series’ trademark wackiness perfectly, and the three new licensed songs only add to the insane atmosphere and gameplay, even though your passengers’ destinations still are ersatzes of famous North-American landmarks/franchises with groan-inducing punny names. 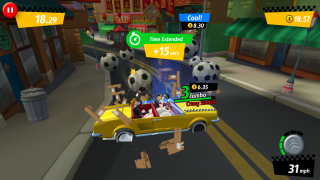 While old-school Crazy Taxi fans may be turned off by City Ru$h‘s lack of an open world (although it’s present in spirit, especially if you play with a controller) and its free-to-play nature, it’s a fun little game that finds the perfect balance between the “endless runner” genre’s pick-up-and-play mentality and classic arcade-y challenge, thus deserving to be checked out by both casuals, hardcore gamers that seek short bursts of fun and fans of the series who still clamor for a proper comeback.