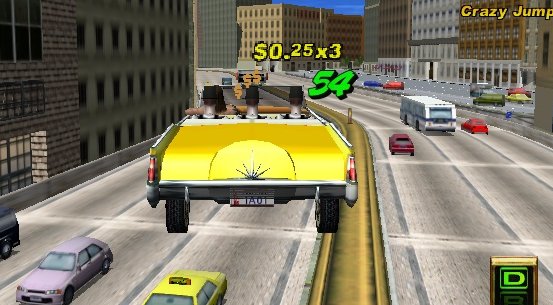 After the huge hit that was the original, it would seem strange to not make a sequel, and that is where Crazy Taxi 2 comes in. The game now follows the Crazy Taxi crew to New York City to go make some even crazier money. While the old crew stays in the West Coast, four new characters are introduced to add an East Coast flavor. While it seems like the West Coast is forgotten, you can unlock the original crew in the Crazy Pyramid mode to play them in the regular game mode.

So what is new with this version compared to the first iteration? Only two things, actually. Crazy Taxi 2 introduces being to pick up multiple passengers. This does not mean you can pick someone up and on the way to their destination you can pick up another customer. This simply means that you can pick up from two to four people at the same time and take each of them to their different destinations. Due to the increase of passengers, you now have more time to drop them off. Additionally, for every crazy move you perform, the bonus cash is multiplied by the number of people in your cab. However, if you don’t deliver them all, you’re shafted the entire fare and are usually left with very little money. It adds strategy to the game in making decisions on whether to play it safe or go all out and go for the big fares. 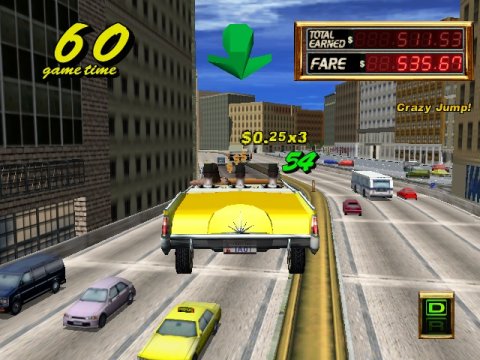 The other big advancement for the Crazy Taxi formula is the Crazy Hop maneuver, or the ability to propel your cab into the air. This move alone changes the entire dynamic of the game. Instead of veering in and out of traffic to reach your goal, you can simply hop over it. The inclusion of this move adds even more techniques to your arsenal, such as the Drift Hop (jumping up to a ledge and drifting to drive the opposite direction). It’s also perfect that the development team would based the level design around jumping. Shortcuts are well placed, usually just a hop away and you’ve cut through a huge portion of the play area to get huge amounts of money. Crazy Taxi 2 based on the building laden city of NYC being called “Small Apple” and the much smaller area “Around Apple”. It’s a nice change of pace after playing the first one to death with it’s hill filled areas of San Francisco although some would argue that these new areas have a bit of a confusing layout compared to the original game.

Crazy Box mode’s spirit is back, as it returns as the Crazy Pyramid mode. It basically plays exactly as Crazy Box mini-games (some of the mini games are actually “sequels” to the first game) but all have an added emphasis on the Crazy Hop. This time you will unlock several items instead of just one vehicle ,and it’s all worth it. Prepare to spend a lot of time with it, for it’s certainly not a cake walk. 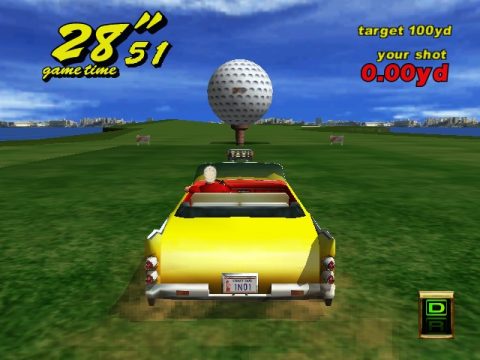 While the game has a lot to offer, it’s still somewhat lacking. The game was supposed to have a new multiplayer and online modes, but these were nixed during development. The graphics are basically the same as the first game, and if you hated the soundtrack before, you aren’t going to be too thrilled with this game. The Offspring come back in full swing with some tracks provided by Methods of Mayhem – but only for the endings. During the actual game you’re stuck with nothing but the 5 Offspring songs. It’s worth noting that this game was never ported to anything else until 2008; it was completely a Dreamcast exclusive until Fare Wars on the PSP arrived. Dreamcast still remains the only way to play it on a home console.