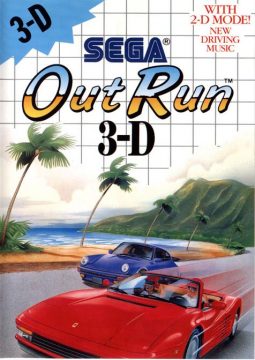 After OutRun’s success, Sega released a number of spin-offs for the home market, created entirely for Westerners. OutRun 3D is one of the first of such efforts, which takes advantage of the shutter effects of the Sega 3D Glasses. The game itself is based on the original Master System version of OutRun, though the course layouts have changed, and a few of the levels are different. 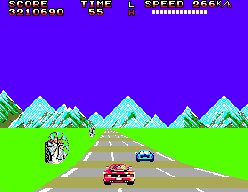 Additionally, some effects that the previous release couldn’t replicate are present, like the ocean on the side of the road on the shore tracks, or the overhead clouds in the plains stage. At a few points, you even drive into tunnels and must race in darkness. The radio allows you to pick from four songs. “Magical Sound Shower“ makes a return, along with three new songs: “Midnight Highway“, “Color Ocean“ and “Shining Wind“, the last of which sounds a little bit like the Space Harrier theme. There are also three difficulty levels to choose from, which fill the road with more cars and even slightly change the layouts of the courses. 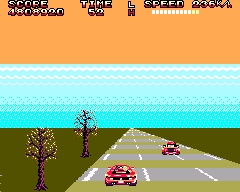 While these extra effects are nice, the animation is choppier than before, and the sense of speed is totally gone. Plus, the 3D effect isn’t too bad, but it’s really nothing more than a gimmick, and it doesn’t justify this sloppy piece of coding. Being one of the later Master System games, it wasn’t officially released in North America of Japan. It also supports FM synth. 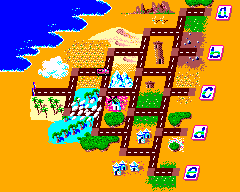 A straight port of OutRun 3D is also included in the retail version of the Sega 3D Fukkoku Archives for the 3DS. This is technically the first time the game was released officially in Japan.