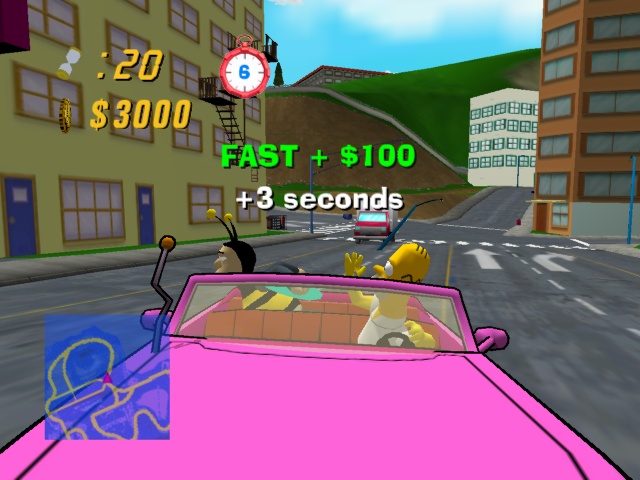 People really enjoyed the original Crazy Taxi. It had an easy pick-up-and-play style that made it an instant hit. Electronic Arts took note of this and decided (at the time) everyone’s favorite game with everyone’s favorite cartoon family should be combined together. And thus you have The Simpsons: Road Rage. What you get is a clone of an excellent game, with humor from the Simpsons show, but it tries a little too hard for its own good.

The most apparent difference that immediately comes up is that this game actually has a story, and therefore a goal. Mr. Burns has bought out the Springfield Transit Corporation and has gouged the prices to ride the bus. The angry citizens of Springfield feel that enough is enough and begin to run their own bus services to raise enough money ($1 million) to purchase the Springfield Transit Corporation away from the greedy hands of Mr. Burns. Interesting to say the least to have a story, seeing how Crazy Taxi‘s complex story is just making money because it’s your job. 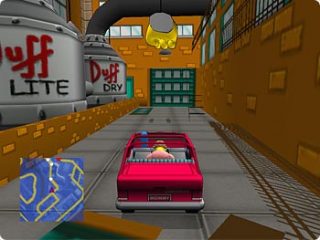 Once selecting a character from The Simpson’s universe (in which there are seventeen total, most having to be unlocked. They include Homer, Marge, Bart, Apu, Krusty the Clown, and others), you are immediately thrown into Springfield to go make crazy amounts of money by picking up passengers and bringing them to their destinations before time runs out. The game is very faithful to its source material, as the visuals appear as though you’re watching a three dimensional version of the show with actual landmarks from taken from episodes. From a technical standpoint, it’s close to it’s Crazy Taxi counterpoint despite the occasional clipping and dipping framerate. The one thing this game really excels at is it’s sound department, as all the characters use their original voice actors/actresses for this game. A lot of the lines are taken straight from the show, and each person you pick up depending on who you choose as a driver is character specific. Even the music is taken from the show. 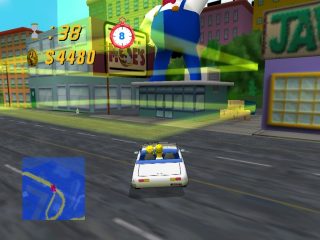 What makes this clone not shine? Developer Radical Entertainment tried making this game look like a Simpsons show and feel like a Crazy Taxi game. While they got the Simpsons part right, they kind of fumbled with the Crazy Taxi part. What is so great about the Crazy Taxi games is that it gives you an arsenal of moves to perform to be able to bring your customers to their destination in a hurry. Road Rage wants you to do that as well, just with no other abilities to help you. While you can Crazy Dash, Crazy Hop, and Crazy Drift, Road Rage has no abilities whatsoever (except doing donuts which is a weaker version of the Crazy Drift). This only kills the game as you will grow tired of the gameplay much more quickly than any of the Crazy Taxi games. 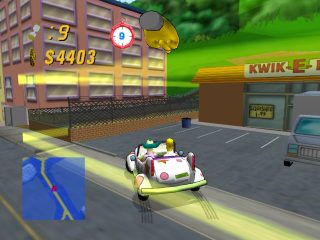 The rest of the game isn’t much better either. There are missions much like the Crazy Box mode of the original, but it is hindered not only by the lack of abilities, but each mission is more or less the same, and all are saddled with horribly long loading times. It does have a multi-player mode which is great, if you want to play a dumbed-down version of Crazy Taxi.

The Game Boy Advance incarnation, cryptically, fares much better. Released the same year and by the same publisher of Crazy Taxi: Catch A Ride, this game is what the Game Boy Advance version of Crazy Taxi should have been. It uses Mode 7-style graphics (think of Super Mario Kart on the SNES), which takes a bit of getting used to, as it’s hard to determine what is driveable and what’s actually a well. However, since the graphics aren’t as taxing, the game runs much faster and feels much better than the GBA Crazy Taxi. 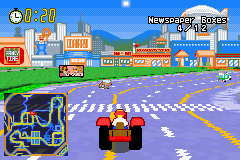 Interesting note: Sega felt that The Simpsons: Road Rage was too close to the Crazy Taxi formula and actually sued EA Games and FOX for infringement of their patent. The case was settled out of court.