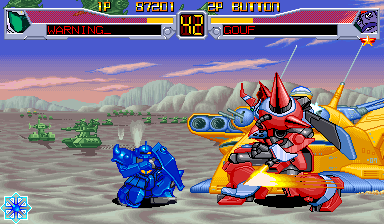 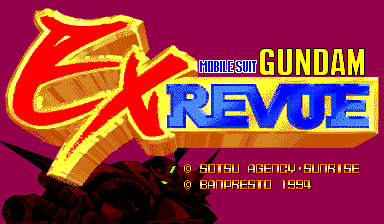 EX Revue, the second and last of the Gundam arcade games, is infinitely better than the first Gundam fighter. First of all, it has a larger roster, consisting of most of the pivotal characters from the One Year War. Most of the cast from the first arcade Gundam game appears here, although Sayla has been unceremoniously dropped, and the standard Zaku is now piloted by a faceless soldiers instead of Jene.

M’Quve is a Colonel in the Zeon forces, and something of a rival to Char Aznable. The Gyan is a mobile suit modeled after a traditional fencer, using quick, precise thrusts and graceful movement.

Although given a generic name, this is actually Akahana. He’s a generic grunt Zeon pilot from the original Gundam series only notable for having a weird red nose and introducing the Acguy mobile suit. For whatever reason, he’s become iconic amongst Gundam fans in the same way that Jek Porkins has become iconic amongst Star Wars fans. The Acguy is an extremely annoying little bugger – tiny but very fast and surprisingly damaging.

Kai is a bit of a smartass, and that usually gets him in hot water with the crew of the White Base, but he’s still an indispensable soldier who defends the ship throughout the series. The Guncannon is a prototype of the Gundam, one of the first mobile suits developed by the Earth Federation. Obviously centers on long-range combat.

Char pilots no less than four mechas in this game. The ultimate mobile suit of the One Year War era. It was never completed, however, and is still missing its legs. This silly looking thing, which seems to hearken back toward the old super robot anime that came before Gundam, fires a multitude of beams from its fingers, can launch its arms at enemies, and can fire a powerful blast from its mouth.

As far as I can tell, this character and this mobile suit only appear in this game. Dolmel definitely seems like the last boss character of the game, with extremely high offense and defense, and a myriad of powerful moves that are difficult to avoid. 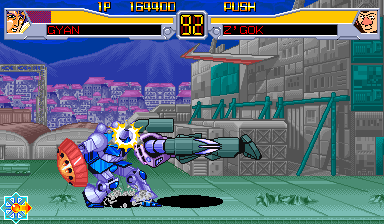 EX Revue has a more refined and combo-friendly combat engine, and insanely good enemy AI that’ll have your palms sweating. It’s also a lot easier on the eyes, with far more fluid animation and more realistic, robotic movement. One of the best things about this game is how vividly it recreates some of the most iconic scenes from the One-Year War. The amount of detail and dynamic action in the backgrounds is truly breathtaking.