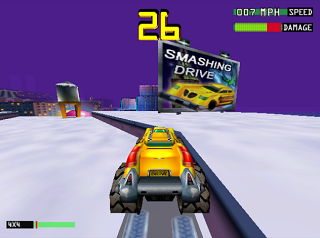 First released in arcades in 2000 and later ported to the GameCube and Xbox in 2002 by Point of View, Gaelco’s Smashing Drive came and went. In Smashing Drive, you play as a cabbie whose goal is to deliver passengers to their destination. And even though logic dictates that it should have been a Crazy Taxi clone, Gaelco decided it to make it a completely linear and generic arcade racer. Although, “generic” might be a misnomer. Smashing Drive is equal parts totally derivative and completely unique. At first glance, it’s nothing special but when you actually sit down and look at it, Smashing Drive is genuinely baffling.

The driving in Smashing Drive feels automated. Most of the game is just holding the gas and moving towards ramps and shortcuts in order to collect power-ups. It is the definition of brain-dead. Your car will collide with the oncoming traffic often and there will be spots where you are bounced around like some sort of ragdoll. You can use your horn to have cars clear out of your way but it only limply moves them to the side. You’re going to crash. A lot. Unless you just clip through the traffic which is also very possible

The shortcuts (or “Risky Routes” as they’re called) are fun to explore. They’ll send you through a variety of locales from basketball games to back alleys to the skyscrapers above you. The most memorable one has you launching a bug-eyed King Kong off of the Empire State Building before descending down the building’s 102 floors via elevator shaft. These shortcuts are the closest thing you have to a choice in Smashing Drive.

The level design isn’t very good and the lack of control that you have over your car only accentuates that. Many of the shortcuts just bump you back and forth from turn-to-turn until the game dumps you back on the road. You could take your hands off the controller during these sections and be fine. The power-ups try to make the gameplay more involved but a lot of them serve little purpose. The “Turbo” and “Sonic Horn” power-ups are the only two that truly alter the game in any way. The others just make the game feel even more automated.

If the game were just bad, it wouldn’t be anything special but it is its soundtrack of all things that pushes it into Kusoge territory. All of the songs are ill-fitting, impossible to understand and all of them are uniquely awesome. Well, all three of them. The first song sounds similar to Rob Zombie’s “Dragula” at spots except it’s not at all coherent. The second song is oddly aggressive. It makes the act of playing Smashing Drive sound like some sort of satanic ritual. Lyrics like “Smashing Drive will make you the devil’s slave” do not help. The final song is the most normal and coherent one but that’s all relative. It’s synth-heavy and the lyrics talk about “smashing” the town and the oppressiveness of New York City until they devolve into mumbling and mournful howls. Saying that “it’s so bad, it’s good” undermines how truly absurd Smashing Drive’s soundtrack is.

Smashing Drive looks pretty good for a Nintendo 64 game. Only problem is that it is not a Nintendo 64 game. Smashing Drive is severely lacking in detail. The skies are grey (although beta footage shows that they were blue at one point), the pedestrians are nightmare-inducing (and ever so slightly racist), the backgrounds are texture-less and the other cars genuinely look like cardboard with paper wheels attached. The only car that looks decent is yours. Everything else looks amateurish and wrong. On a positive note, the frame-rate is surprisingly good.

The GameCube and Xbox ports are both bare-bones ports for a below average game. They cut out some of extra fluff, like the scenes in between levels that show customers being picked up, while adding very little in its place. Oddly enough though, these missing cutscenes are present in the game’s manual. The only mode that the port adds is “Survival Mode” which is almost exactly the same as the regular Arcade mode, only your health bar actually means something. If your car racks up too much damage, it’s Game Over. It changes very little from arcade mode since taking an excessive amount of damage already means that you’re likely going to run out of time.

Gaelco would continue to make arcade games for several years until 2004’s Tuning Race which appears to be their last title. Smashing Drive is actually the spiritual successor to a 1998 arcade title called Radikal Bikers which received a PAL-exclusive PlayStation port by Infogrames. And speaking of Radikal; Gaelco now releases dart machines under the name “Radikal Darts”.