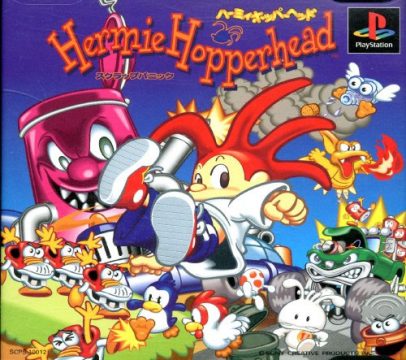 Hermie Hopperhead is a rather obscure Japan-only PlayStation game, with only scant coverage in the West. It’s safe to say that many of the English speakers who know of it, probably only do so as a result of the original GameFAN‘s regular praise-filled coverage – including at least two reviews plus lengthy interview with its creators. Screenshots seem to back-up these claims since Hermie Hopperhead does look absolutely gorgeous, and is even more so in motion where its many layers of parallax scrolling are visible. Unfortunately all that is obscure is not gold, and despite praise from several different places Hermie Hopperhead is actually rather lackluster. 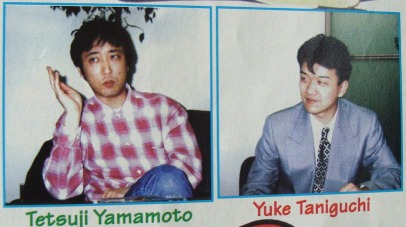 The story follows the eponymous Hermie, a kid with ginger dreadlocks, as he witnesses an egg leap out of a trashcan and, peering inside said receptacle, falls into an alternate dimension of walking eggs and flying garbage. Seriously, that’s where the Scrap Panic subtitle comes from, since the world is populated by all manner of anthropomorphic trash. Mechanically the game is a poor blend of Mario and Sonic, with none of the charm or intelligent design from either. The plodding eggs behind Hermie recall Yoshi’s Island, but in actual fact these are animal friends who can be called upon for assistance. Hitting triangle releases them to go off on their own, whereupon they will attack enemies and collect stars around the screen. With the animals running around, hitting triangle again freezes them, allowing you to recollect and have them follow you. Stars act as currency, usable at the end of every stage to either level up your friends or buy extra lives.

There are four types of animal friend: penguin, chicken, turtle and dragon. Each starts as a coloured egg, but spending stars allows them to become a hatchling, adult, and in their third and final stage, don some clothing. In a way these animal friends act like the rings collected by Sonic. If you have one or more friends following you and are hit by an enemy, you’re stunned instead of killed. The friends meanwhile run off doing their own thing as if you’d tapped triangle. Get hit again without any friends tagging along and you die. This means that when you do release them to forage you’re extremely vulnerable. Occasionally there are also signposts with an image of an egg-colored platform, whereupon you can transform your buddies into said platform with the press of triangle. Other signposts also give them the power to transform into a corkscrew for removing giant corks blocking your path. Their transformation powers are only available near these signs, making them arbitrary and mostly useless. In addition the buddies are needed in underwater stages where Hermie can’t attack enemies and has to rely on them exclusively for protection. Without them you can’t pass. 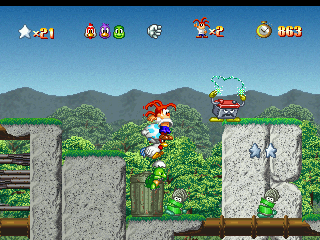 While the animal buddy system sounds clever, like a Sonic the Hedgehog game where there are three Tails who can be given commands, it’s executed poorly. You have no control over how they behave, and quite often they’ll run into a bottomless pit, disappearing until you enter a new area. The buddies are immune to all damage, and there are a few cool puzzles designed around this, such as enemy or spike filled tunnels which have stars in them. It’s too dangerous for Hermie, so he walks along the top of the tunnel in safety while his buddies follow below. Or at least that’s the idea, but since you can’t control their behaviour they’re likely to do anything but what you want. Thankfully if you do lose them down a hole they reset their position every time you disappear down a trash can. Acting like Warp Pipes from Super Mario Bros., trashcans transport Hermie and friends to bonus areas or a different section of a level.

What kills the game is the excessive difficulty and sheer frustration of slogging through the levels. Platformers can be difficult, but whereas something like Little Ralph on PS1 is difficult because of clever enemy placement in a well structured stage, requiring thought and skill, Hermie Hopperhead is difficult simply because the designers pumped as many enemies onscreen as the system could handle. Really, it’s ridiculous. Some sections must have a succession of 30 or so enemies just marching towards you, like a carpet of death. Add to this swirling spike balls, flying electric sparks, bouncing tires and precarious pitfalls, and you’ve got a trainwreck of imbalance. Even more annoying is that you are sometimes required to make blind leaps of faith amidst this mess, and there are occasions where a line of stars guides your way – except instead of guiding you to safety, the stars guide you directly into a bottomless pit. Why would any level designer do something so counterintuitive and utterly aggravating? 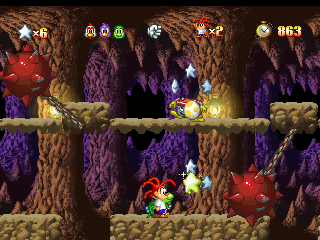 In addition to standard platforming levels there are also 3D bonus levels, which are pretty cool. They play a bit like Jumping Flash!, with a 2D sprite of Hermie on a flat 3D landscape (unsurprising considering Tetsuji Yamamoto worked on both). Jumping sends you hurtling into the air with the camera switching to a downwards view as you guide Hermie back to solid ground. The enormous world map also has different routes you can take, with hidden shortcuts and secrets to uncover, but honestly the regular game is so frustrating to play there’s little reason to unlock it all.

It’s also worth mentioning the music, all five tracks of it. In fairness the tunes are actually really catchy, with a jazzy ragtime flourish. Unfortunately it’s no exaggeration to say that for the roughly 100 levels in Hermie Hopperhead, every single one of them plays exactly the same song. It doesn’t matter if you’re underwater, in a desert, swinging through a jungle or struggling in a snow storm, it’s the exact same tune repeated until you throw up. The music changes when underground and during boss fights, plus various front-end things like the map, but these changes aren’t often enough. Ironically if you download the OST you’ll find 34 tracks on it, the majority of which are imperceptible remixes of the same main song.

It’s worth reading GameFAN‘s interview (above) with the creators of Hermie. To their credit they are correct, the parallax scrolling is some of the best seen in a 2D video game (in most stages anyway). Having said that though, the game still isn’t quite as lovely as Yoshi’s Island, which, despite technically being released a short awhile later, appeared on older hardware. Interesting to note that the GameFAN re-review mentions a sequel to Hermie Hopperhead which never appeared. The interview only states they’ll consider one if it sells well. 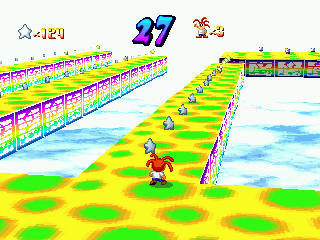 The team had the technical ability and the opportunity, so in a funny way it’s amazing just how joyless they managed to make the game. It contains new ideas, looks nice, has slick controls, a few good puzzle ideas involving your animal friends, and a currency system for collectibles to use as you see fit – on paper it all sounds brilliant, and yet the final combination of elements comes across as hopelessly uninspired and needlessly annoying. Maybe the designers just got bored halfway through? Level themes start to get recycled, and structurally some stages feel so similar to earlier ones it’s almost as if they just did a massive palette swap for the entire level. As the interview reveals, the guys behind it had experience as coders, but not really level designers. Besides looking nice, playing Hermie Hopperhead quickly becomes excruciatingly tedious, especially considering the number of other better platformers out there. Every minute spent on Hermie Hopperhead is a minute not spent playing something infinitely more awesome.

Curiously the ending has English dialogue, though its lack of release in the West was probably due to Sony of America’s anti-2D policies during the PS1 era, which is backed up by interview answers with the dev team.  Finally, random Googling of the katakana name yielded this photo of a man holding a plastic Hermie head – who knows what it means, but it’s pretty damn funny. 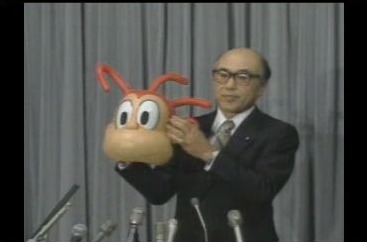 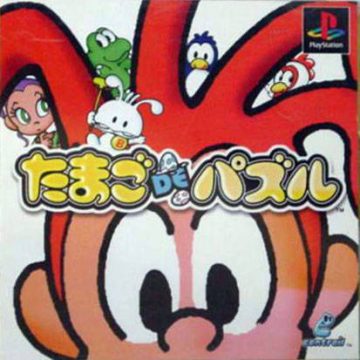 Tossing random properties into puzzle games was a popular thing to do back in the 16/32-bit era (see: Dr. Robotnik’s Mean Bean Machine, Tokimeki Memorial and TwinBee Taisen Puzzle Dama, Sakura Taisen Columns, Super Puzzle Fighter II Turbo, the list goes on) so Sony was quick to give Hermie his own falling block title. Entitled “Tamago de Puzzle” (“Puzzle Egg”), it’s like competitive-type games, where you drop combinations of eggs, two at a time, and cause blocks to appear on your opponent’s screen. It uses various characters from the Hermie game, including a robotic doppelganger of Hermie. There’s also a full story mode with even more animated cutscenes. 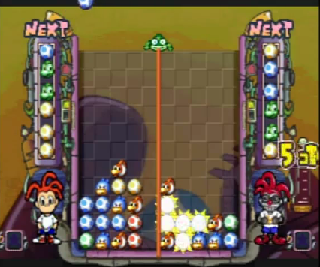