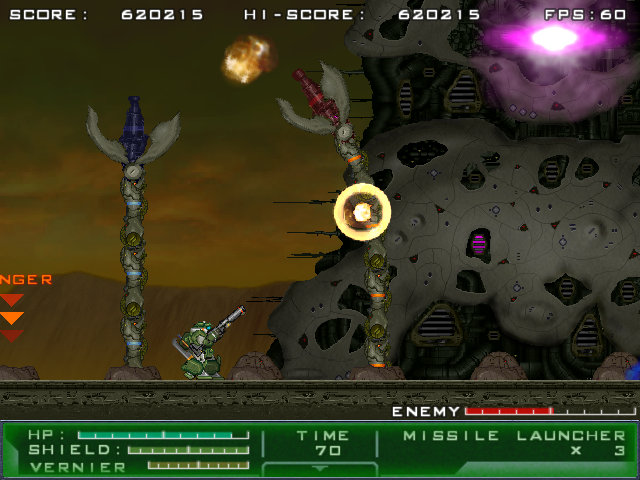 Gigantic Army is such a gigantic love letter to Cybernator it might as well be a long lost sequel. It almost doesn’t show that it was made by a small team of hobby developers, albeit with a pedigree – Astro Port is well known in the doujin community for 2D traditional shoot-em-ups like Satazius.

Just like Valken, Gigantic Army prefers calculated, methodical progression over the frenetic action of other run-‘n-guns, but the player-controlled giant robot feels even heavier and a bit stiffer than in the original. The controls with the freely rotating gun are also carried over, but not without a few tweaks: holding the fire button now allows to keep shooting in a fixed direction even while moving, and it is no longer necessary to switch to the melee attack, because it is activated automatically when tapping the button close to an enemy. The trusty shield is also included, although it has a limited duration, and its angle has to be adjusted properly to block incoming projectiles, too. 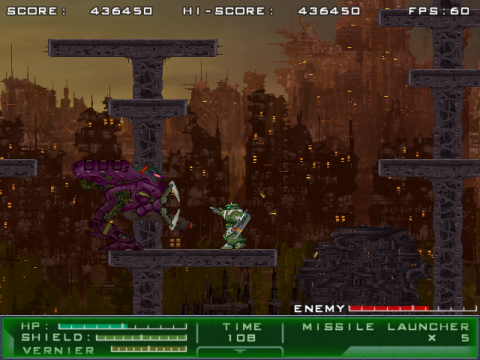 Also new is the choice of arms that precedes the action: The Assault Rifle is a standard machine gun with a straight shot, the Riot Gun fires a wide spread, and the explosives fired by the Grenade Gun detonate on hit, so they may damage a target even while missing it. The effectiveness of these three weapons is clearly tiered, but the better the gun, the fewer charges are available for the special weapons, which likewise consist of three choices.

Of course the limited jetpack capabilities from Assault Suits cannot be left out, even though there’s not too much to do with it other than avoiding enemy bullets or reaching the occasional high plateau. There is really only one area that requires finely tuned use of the throttle, but that one is optional. Otherwise, the platforming elements remain very tame throughout, and serve mostly as a backdrop for the fighting. With cunningly placed slopes and platforms for the enemies to use to their advantage, the game never forgets to force the player to use all of the mecha’s abilities to get through encounters unscathed.

On normal difficult, Gigantic Army gets quite challenging after the first two stages. It is one of the very few games where the time limit actually poses a threat. There are time limit extensions that can be picked up from destroyed boxes, alongside health recharges and weapon upgrades, but eventually getting them all becomes a necessity rather than a bonus. Without proper use of the shield and avoiding maneuvers, the war is not very likely to end well, and even though it is possible to continue three times per play, doing so always resets to the very beginning of the current stage. After finishing the game, two more difficult settings await to be unlocked. Fortunately, there is also an easy mode, where it isn’t much of a problem to breeze through the story. 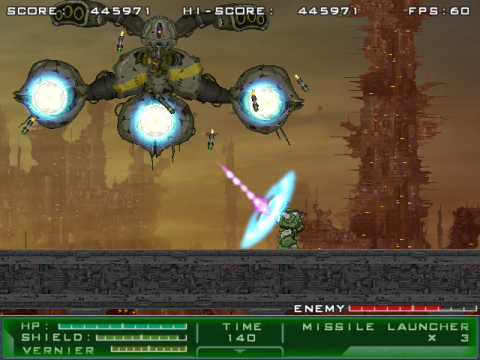 The narrative isn’t really a good motivator to make it to the end, though. It’s merely a long series of the protagonist’s journal entries in between missions. Combined with the dry prose and localization issues – the text display seems to depend on system settings and may appear cropped and including some corrupt characters – and it’s safe to recommend to just skip through them as fast as possible.

It’s a shame, too, because the rest of the presentation is very professional-looking. The graphics are displayed in 640×480 resolution, but the sprites are all done in pixel art. Many of them are huge, too, even though the detail is limited to sterile mechanic textures. They also are properly redrawn to hold weapons consistently in the same arm when turning around. Whenever one of these gigantic mechas is destroyed, an impressive wave of explosions follows suit. The backgrounds may not be the most varied and promote a rather limited range of colors per stage, but there are just enough neat little details to keep them interesting, like ongoing space battles or tiny cars on a freeway. The soundtrack mostly consists of unconscious techno/industrial, the kind of music that never seems to receive much love among the retro game audience. It’s befitting of the stark, cold techno world the game takes place in, though, and at least has a few interesting touches, like voice samples of men chanting. 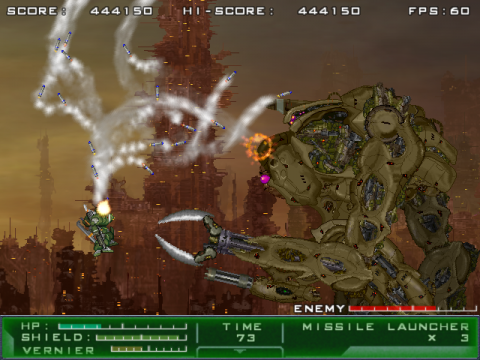 Gigantic Army may not have the bombastic presentation, aesthetic consistency and exciting storytelling of the other Assault Suits inspired indie game, Gunhound EX, but in turn it boasts the more interesting dynamics and isn’t as easily tiring. To those who prefer a more rapid pace in their action games, the slow maneuverability of the robot might quickly become the source of frustration, but mecha fans who appreciate a feeling of weight to what would be several hundred tons worth of machinery should feel right at home.

A demo of the game is available on the official homepage.