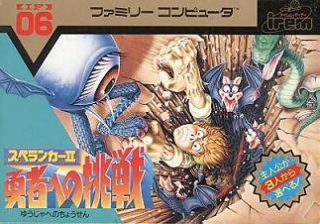 Spelunker II for the Famicom is an extremely weird product. It’s absolutely nothing like the original game – instead of being a straightforward action-platformer, it’s an open-ended action-RPG, vaguely similar to Metroid or The Goonies II. It almost feels like a totally different game that simply had the Spelunker name attached to it due to its popularity on the Famicom. It was produced completely by Irem, without any involvement from Brøderbund or Tim Martin. 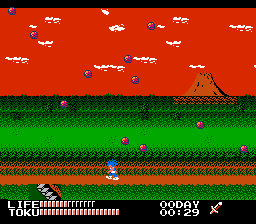 Although much of Spelunker II takes place in caves, you also wander around an overworld, searching for items that will unlock doors and allow you to progress. You have a life meter now, and it controls nothing like the original, with none of its quirks (although you do take a tiny bit of damage if you jump too far.) Like most of these types of games during the era, it’s a bit easy to get lost, since there’s no in-game map and little graphic variation, and no real direction either. It’s also tough to map because, like The Goonies II, the overworld uses a dual layer world map for “front” and “back” planes. The action is also clumsy, as certain enemies take too many hits to kill, or attack in patterns that are extremely difficult to dodge effectively. You have only a single life, and there are no checkpoints, continues or passwords. It is comparatively shorter than others of its type – if you know exactly where to go, it can be beaten in an hour or so – but it is still quite harsh. 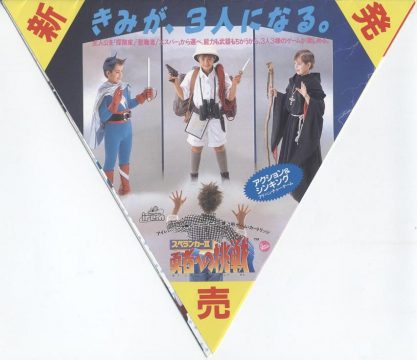 When you start, there are three character classes to choose: the Explorer, the Clergyman and the Esper, each with different skills. All characters have a close-combat and a projectile weapon, with the projectile weapon sapping health if used. At the outset, you can also stock up on supplies – rations to restore health and bombs to blow up stuff. The Explorer looks most like the hero of Spelunker and is the default character, so it might be logical to assume he’s the ideal choice, but it’s a trick, because he’s actually the worst. The Clergymen can attack undead enemies with his default weapon, which can normally only be killed with the awkward Rosary item. The Esper can leave behind markers and teleport back to them later, making exploration infinitely quicker. The Explorer has none of these traits and his only benefit is the ability to carry more supplies into action. 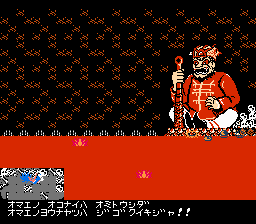 By far the oddest aspect of Spelunker II is the Toku meter. “Toku” translates to “virtue”, and works similar to RPGs like Ultima. Every time you kill a bad guy, you gain virtue. Every time you grab one of the hints lying around, you lose some. For the most part, it doesn’t affect much of anything, unless you fall into one of the pits lying around the landscape, which, for some reason, lead straight into hell. If your virtue is high enough, you’ll be tossed back into the land of the living at a minimum penalty. If it’s too low, you’ll be sentenced to an eternity in the underworld and lose the game. (The same thing happens if you do something particularly horrible, like killing the injured deer that you’re supposed to heal.) The whole concept feels shoehorned in and really has no place in a game like this.

Disregarding the fact that Spelunker II has no real place in the series canon, fans of these type of 8-bit exploratory games may find something to like, but the core action is so troublesome that it’s hard to really enjoy. The ROM has been fan translated into English, making it slightly more playable for non-Japanese speakers.

Daiku no Gen-san 2: Akage no Dan no Gyakushuu