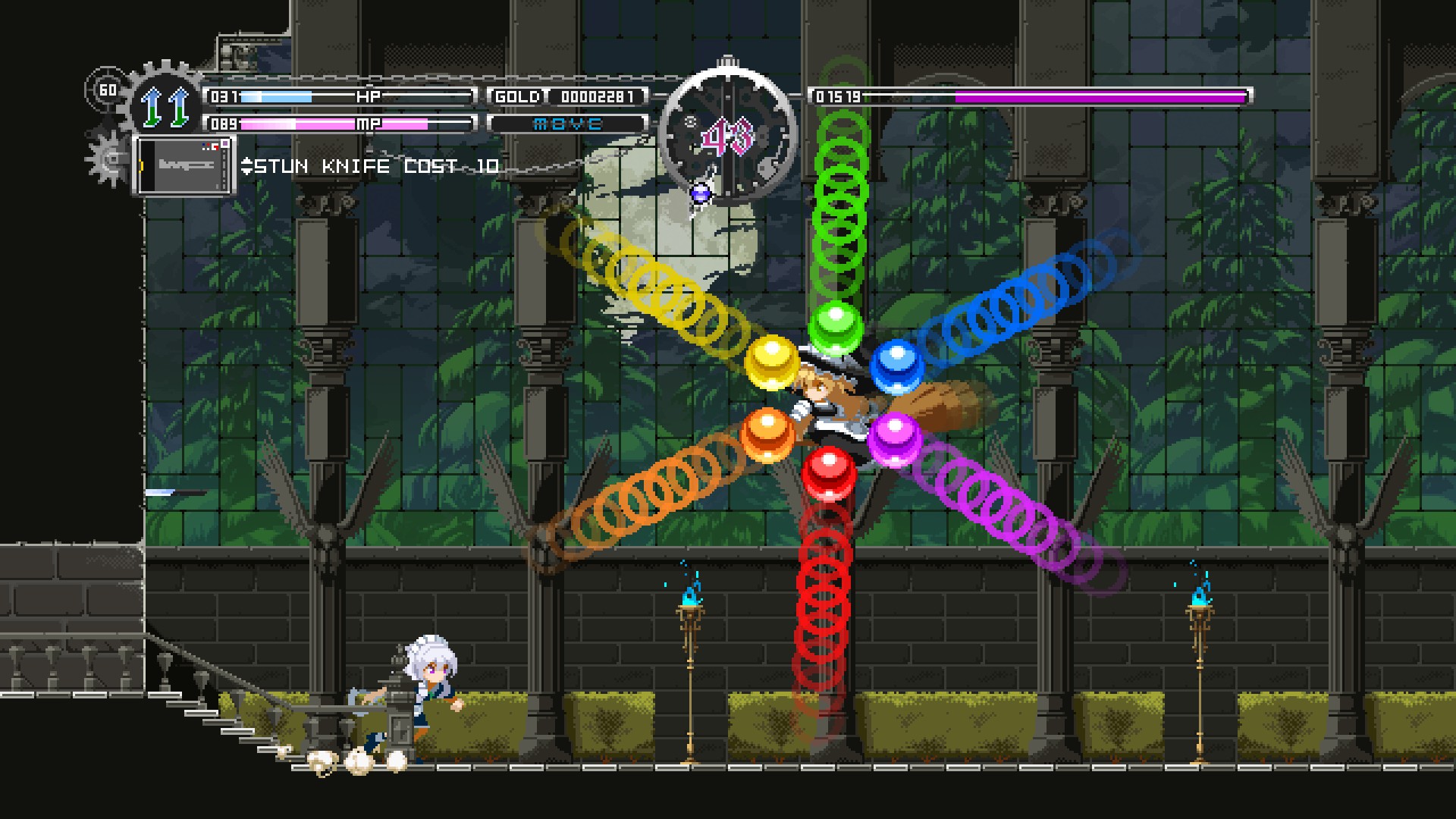 This review is featured in our Guide to Retro Indie Games Vol. 2 book, which includes coverage for several other indie Metroidvanias. Please check it out!

Japanese indie developer Krobon Station obviously had a thing for Castlevania: Symphony of the Night, as evidenced by their homage game Pharaoh Rebirth. After that game’s publication in 2015, they joined with Team Ladybug and used the engine in a few other Metroidvanias, which were promotional tie-ins with other properties – Shin Megami Tensei: Synchronicity Prologue and Kono Subarashii Sekai ni Shukufuku o! Fukkatsu no Beldia (“Konosuba: Revival of Beldia”, based on the isekai parody series). They returned to commercial development with Touhou Luna Nights, itself based on Touhou Project.

Touhou Project itself is an expansive series that began in 1997 as a series of shoot-em-ups helmed by a single developer named ZUN. They star a whole variety of cutesy girl characters, so together with the series’ moe appeal, its hardcore bullet hell action, and its excellent soundtracks, became quite the Japanese indie phenomenon. ZUN was also open for developers to use his characters in other games, which have resulted in dozens of Touhou games featuring the same characters but in different genres, interpreted in a number of ways. 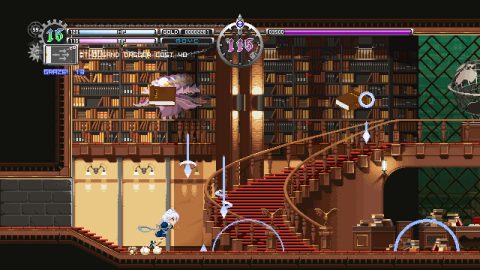 Touhou Luna Nights is “Touhou as a Metroidvania”. Technically the series flirted with Castlevania in the earlier Koumajou Densetsu series by Frontier Aja in 2009, though despite their appearance, they’re actually closer to the level-based action games than the exploratory games. In fact, the basic look of Touhou Luna Nights is very heavily influenced by Symphony of the Night, just using an anime girl as its protagonist.

The star of this game is the maid Sakuya Izayoi, who has been transported to an alternate world, trapped in a castle, and stripped of her powers. The goal is, of course, to escape, but she’ll also run into other Touhou characters like martial artist Hong Meiling, witch Marisa Kirisame, magic librarian Patchouli Knowledge, vampire Remilia Scarlet, and miko Reimu Hakurei (technically the star of the main Touhou games). Touhou Luna Nights assumes the player is familiar with these characters and does little to introduce them, which means that the story, however sparse, may seem like complete nonsense. It has a peculiar sense of humor, as save points are represented as pay phones, and HP/MP restore spots are vending machines. (Sakuya tosses a can after drinking it – try to get one in the recycling bin!) The first area is a Japanese-style bath house, while later parts of the castle consist of libraries and clock towers, the type of stuff you’d normally see in a Castlevania game.

Sakuya’s main abilities involve throwing knives and stopping time, both of which you’ll be using quite regularly. The knives are quick and versatile, as you can toss a whole barrage to slice up enemies real nicely, but they also drain Sakuya’s MP. This regenerates very slowly on its own, but the more efficient method of restoring it is by “grazing” enemies – in shoot-em-up terminology, this involves moving very closely to enemies (or their projectiles) without getting hit, though in this game, it just means getting close enough to a bad guy to sap their energy. This is still dangerous, though, so instead you can just stop time and drain them that way, though they can still cause damage even when frozen. You can try to toss daggers when time is stopped, but they’ll stay hovering in place until the flow of time resumes – it is amusing to toss a whole flurry of these point blank in front of an enemy, then resume time, causing them to skewer a helpless foe before they even know what’s happened. 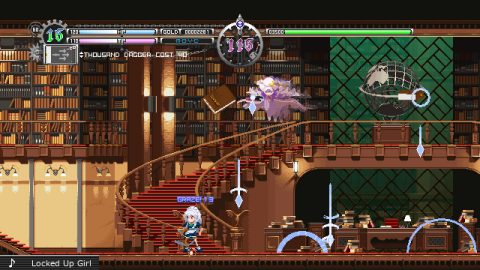 The time stop abilities are limited, but its meter also replenishes itself very quickly, so you’ll be able to use it regularly to freeze enemies, steal their MP, then kill them. This becomes much trickier in boss battles, where you’ll need to conserve your knife attacks and wait for them to use certain attacks and then drain them, or else you’ll find yourself too drain to fight effectively.

The time manipulation skills also play into a number of challenges, though it’s hard to call them puzzles. At first, these are straightforward – stop time so you can duck past some blades, for example – but later on, there are objects that continue to move even if time is stopped, objects that only move if time is stopped, and even some that move in reverse when time is stopped. While you get a double jump fairly early on, later you get the ability to use floating knives as platforms, allowing you to reach higher areas.

Compared to other Metroidvanias, the structure is pretty linear, and it’s hard to get lost. There are five stages in total, each with a boss fight, and each granting a key that can open up doors to other areas. You can revisit prior areas to use newly obtained skills to reach items you couldn’t before, though, and there are a whole lot of secret passages. In addition to a leveling system, there are lots of additional items to find, including HP and MP expansions, time extensions, and several special moves, some of which are almost essential for boss fights that it’s highly recommended to hunt them down. Destroyed enemies also drop a variety of colored gems – these will (very slightly) increase your stats, but you can also sell them to the shopkeeper Nitori, who will then allow you to purchase items like health or MP restoratives, among other helpful items. 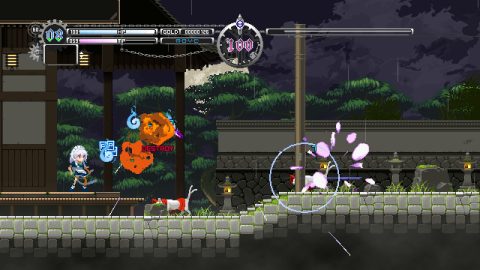 Sakuya moves and animates with the same grace (and a similar looking running cycle) as Alucard from Castlevania. She’s a lot of fun to control, as the interplay between the knife attacks and the time-stopping abilities make for some compelling action. Most of the music is arranged from other Touhou games, mostly the fifth game, Embodiment of Scarlet Devil – since these were originally created for high octane shoot-em-ups, they’re very energetic, and even the moments where you’re just sauntering through random hallways become far more intense thanks to the soundtrack.

Touhou Luna Nights isn’t particularly long – you can play through it in less than five hours – but it’s well paced, with compact level design that’s more focused on action and platforming exercises than exploration, though there’s still plenty of hidden stuff to find. There’s also a bonus stage, unlocked after beating the game. The boss fights are pretty challenging too, and while you can leave and become stronger, even through leveling up or finding extra items, you really need to study and exploit their patterns to beat them. And while it leans on its Castlevania inspiration a little too strongly, the fun heroine and unique mechanics help give it its own identity, making it an essential play through for Touhou vets and newbies alike.