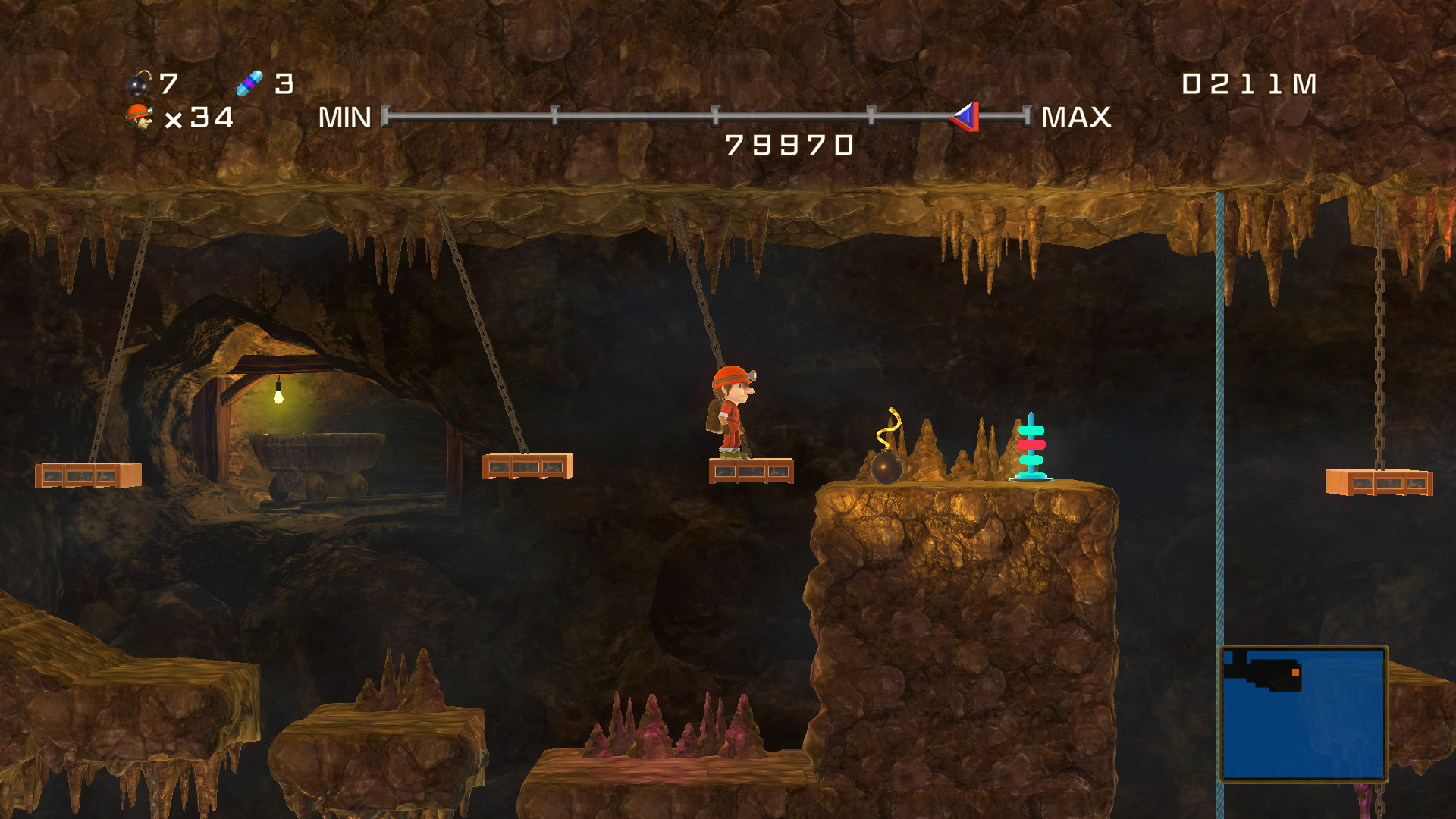 Tozai Games, who developed the remakes of Lode Runner and R-Type for the Xbox Live Arcade, also remade Spelunker for the PlayStation 3 and published on the PSN. It was released in 2008 in Japan under the name Minna de Spelunker, but wasn’t published worldwide until 2010, when it came out under the name Spelunker HD. It was later ported in 2021 to the PlayStation 4 and Switch as Spelunker HD Deluxe. It’s more than a mere remake, because it drastically expands the concept while maintaining the core gameplay.

It’s somewhat scary how closely Spelunker HD plays compares to the original. The mechanics are just as rigidly punishing as the NES game, the controls are just as stiff, and the hero is just as fragile. It even emulates the shaky animation of the main character fairly well. The only improvement is the ability to turn on “Vine Assist”, which lets you hold a direction on a vine without falling off. (The same thing, strangely enough, does not apply to ladders, which you can still plummet off of if you’re not careful. This option was removed for the Deluxe version.) At first it seems like the developers were insane to not fix any of the issues of the original game, but that would have been missing the point. As the arcade game indicated, Spelunker with “good” controls is not Spelunker – it is merely another generic platformer. As such, Tozai has an extremely solid understand of the original game. 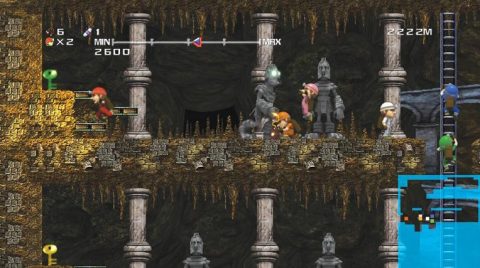 The biggest improvement – which may seem subtle at first – is that the level design is much more accommodating. All of the original versions of Spelunker had stages which seemed designed to infuriate, but Spelunker HD has a much gentler curve. It’s still quite easy to get killed, of course, but once you’ve mastered the particularity of the controls, it actually becomes remarkably playable. Part of this may have to do with the zoomed-in view, which has substantially larger sprites than any of the other versions of the game. You can choose between the revised HD tilesets and a retro one using a similar style to the Famicom game, and those chunky sprites blown up so large look a little strange, but it really does help make it easier to control.

The levels themselves are drastically, drastically expanded. The original game has four levels. Spelunker HD has ten areas, split into ten levels each, for a total of one hundred levels, over twenty times the length of the original. The first area is a cave, with a layout vaguely similar to the NES version, at least for the first few levels, but it’s definitely not quite the same. The later stages take on different themes like ice levels, ruins, volcanoes, and so forth. This means many, many new obstacles and enemies compared to the original versions – the first stage alone introduces Indiana Jones-style boulders, as well as deadly spiders, which lie in wait until you’re right underneath them, requiring near perfect timing to get past them. There are also numerous hidden mural pieces throughout the stages, which will slowly piece together a large picture once all of them are collected.

In addition to the main mode, there’s also the Championship mode, a series of extra hard, brand new levels. In order to help conquer these, you’re given 50 lives at the outset, and you’ll definitely need them. These were added to the PS3 version with a post-release patch when the game was republished by Tozai, with the first ten stages included for free, and the remaining levels available as DLC.

Until you get used to controls, Spelunker HD is still quite hard. Extra lives are numerous, thankfully. There is a save system in place, the usage of which is practically mandatory, but it’s very awkwardly implemented. You can save at any point, but it dumps you back to the title screen. You can immediately reload it – it’s not technically a “quicksave”, so it doesn’t delete this saved game – and you’ll be roughly at the same spot, with the same number of lives. Essentially it forces you to make your own checkpoints. The game lets you start at the beginning of any of the 10 areas, but not any of the sub-levels. Since it can potentially take up to an hour to clear a single area, which can also be lost if you run out of lives, this save system is one of the major things that keeps the difficulty manageable. 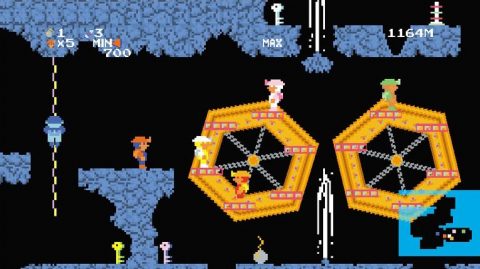 A few other features round out Spelunker HD, including multiplayer. Four people can play on a single console and six can play online. If one player runs out of lives, one of the others can revive them. The few songs from the original NES game are included in remixed form, as well as completely new songs for all of the new areas. The updated graphics aren’t great, but are acceptable for a low budget title. The main character also has unique animations for each type of death, and the eulogy during the Game Over scene also describes your manner of death.

Spelunker HD is not a game that most players would “get”, at least not initially, simply for how easy it is to die. But if you’re familiar with the lineage – and perhaps more importantly, have the patience to deal with the control scheme – it’s actually a pretty fun game that keeps in the (still frustrating, honestly) spirit of the series while greatly expanding its scope.

Japan also saw a more difficult revised version called Minna de Spelunker Black. The most notable one is a “dark” mode which clouds the screen, allowing only a short range of view. Otherwise, it’s basically the same as the original game. It was delisted from PSN along with the original game when the rights for Spelunker HD were transferred from Irem to Tozai, but unlike the original, it was never re-listed, and so it’s essentially a lost game, even if it’s just a slightly modified version of an already released one. 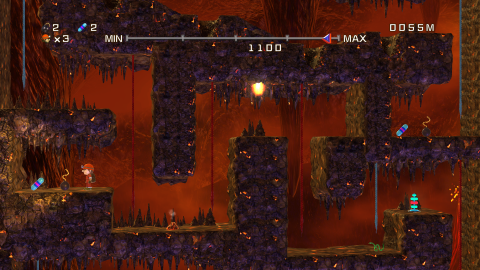 Spelunker HD Deluxe for the PlayStation 4 and Switch makes a number of improvements. For starters, while the PS3 version was HD resolution 2D, this version has been remade completely using 3D graphics, and creating a new cutesier character models similar to the ones in the sequel, Spelunker Party!. The end result doesn’t look dramatically different – it’s still not exactly an attractive looking game – but it is an improvement, especially with the better lighting effects. Plus, in the PS3 version, the screen occasionally stopped at certain edges and flip-scrolled between segments, to replicate the feeling of the original NES game. This version fixes it so the scrolling is completely smooth.  Content-wise, it includes all of the DLC Championship levels along with a new Infinite Cave NEO mode, which is a randomly generated level that scrolls automatically downward. While the PS3 version was a download-only title, this edition did receive a physical release. 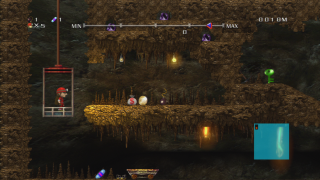 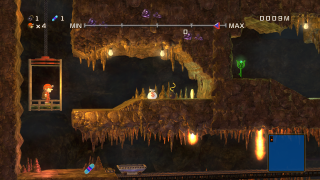