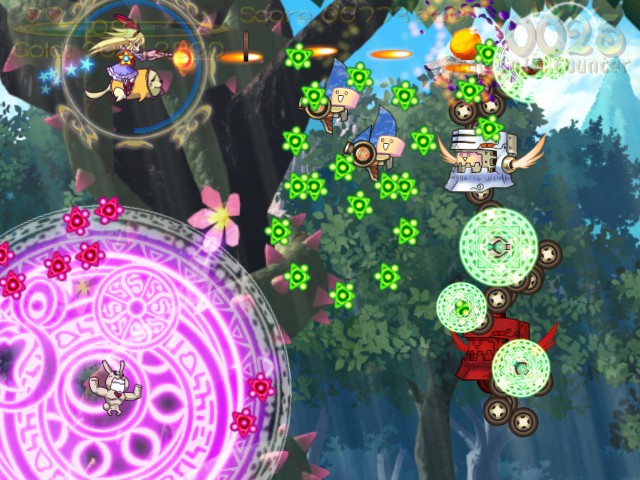 It’s practically a fact that Touhou games (and their assorted ripoffs) dominate the doujin shmup scene. They’re obviously the most popular, but they’re a bit of a waste if you’re not a fan of their particular brand of bullet hell/danmaku shooters. Studio SiestA feels Touhou is overrated (and actually caused a bit of controversy in the otaku scene when the leader derided them as garbage) has been picking up the ball and releasing a wider variety, starting with their excellent Air Rade (and its revisions/sequels), and the Star Soldier tribute Soldier Force. Following these is Trouble Witches, which, like Air Rade, is a side scrolling shooter with gorgeous sprites, cool mechanics, and, per usual doujin standards, lots of cutesy girls. Each girl has their own story, both their common goal is to hunt down the titular Sisters of Amalgam, who are naturally the bosses of each level. Trouble Witches is notable because it’s one of the few titles to expand beyond its PC roots – first, in an arcade game called Trouble Witches AC, and second in the form of a worldwide XBLA release called Trouble Witches Neo!, published by SNK Playmore.

In the initial PC version, there are three playable witches, with a fourth unlocked later on, and enabled with one of the patches. These are Pril, Aqua, Yuuki and Sies. The arcade version adds four more characters – Louie, Symphony, Conan and Lyla (the latter two are unlockable) while the 360 version adds another two more – Sakurako (available from the start) and Luca is a DLC character. Yuuki is known as Valorie in the English version, and Sies is missing from all versions except the PC version. 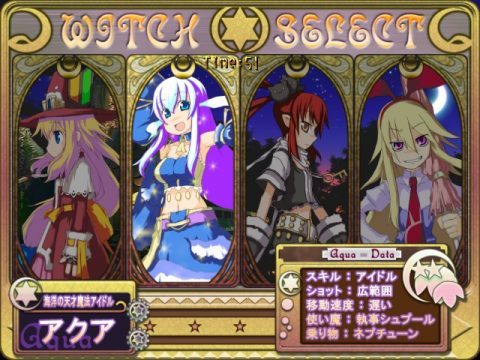 Each witch fires a slightly different type of shot, has a different familiar, and moves at different speeds. There’s actually a relatively expansive Story Mode outside of the usual throwaway boss dialogues, complete with fully voiced dialogue. The artwork in these are generally pretty decent, even if a few of the designs look a little amateurish. However, the English voiceover dialogue in the Xbox 360 version is hilariously atrocious, easily as bad as Castle Shikigami 2. It almost definitely sounds like these were random Japanese people grabbed off the street and forced into reading English despite not possessing any acting talent nor any fluency in the language. It’s comical, but painful in large doses, and thankfully the original Japanese voice acting is available.

Trouble Witches‘ central mechanic is the Magic Circle, which is functionally halfway between the bullet-sucking of Giga Wing and Mars Matrix, and the time slowdown of Espgaluda. Each witch is accompanied by a familiar, who floats around and supplies a bit of additional firepower. However, they’re also used to generate magic circles, based off how much magic power you have. You can create small magic circles, which drain power slowly, or create huge ones that suck up MP pretty quickly. Any bullet that enters a magic circle will turn colors and slow to a crawl, allowing you to more easily manage the onscreen chaos. Here’s where it gets fun – if you manage to shoot down an enemy, all of the bullets they’ve fired that are caught in the circle will be converted to gold coins, which are automatically collected if you let go of the fire button. Trying to catch as many bullets as possible, while also trying to destroy everything on the screen, is the best way to milk this for all it’s worth. On the other hand, there are a couple ways this can backfire. If you don’t pay attention and run out of magic power, all of the bullets will, of course, resume normal speed. Even worse, if one of the bullets enter the magic circle then exits it, or if the enemy that shot those bullets leaves the screen without being destroyed, those floating bullets will turn yellow and fly directly at you. It’s an extremely compelling gimmick that helps liven up the action, along with providing a compelling risk / reward mechanic.

Not only does it work as a defensive mechanic, but proper use will also give you additional cash to buy new weapons and items. In a nod to Fantasy Zone, you’ll come across a floating pumpkin balloon, twice in each stage. Here, you can purchase a variety of weapons, and even extra lives. (You can also harass the overly timid shop keeper if you’d like, by clicking on her chest (or her pumpkin hat in the Neo version), but you’ll get kicked out really quickly by her sister.) You can store up to three at once, and can be activated at any time. There are nearly a dozen weapons – some added via patches – and last for a limited time, although they can also absorb a single hit. Killing enemies with these weapons will also yield special star medals, which opens up the way for more bonus points. Obviously, waiting for the parts in each level with the most enemies and activating your special powers is the way to really rack up your score, although it is disappointing that these secondary weapons are so limited in usage.

The levels themselves are inventive, although strangely the visual quality degrades as you progress through the game. The first stage features a train zooming against the bright blue sky, complete with subtle scaling effects, while the second takes place in a luscious forest. The third is a frigid ice field, complete with Gradius II-style glaciers that break up when shot, and the fourth is a perilous volcano world. Unfortunately, the fifth and sixth stages are just dark and generic temples, featuring cheap looking 3D backgrounds. At least the sprite work is genuinely excellent throughout. Unfortunately, the music is quite forgettable.

The difficulty is pretty well balanced, so even though it gets frantic, it’s usually manageable. The original PC release started you from the beginning of the level when you ran out of lives, but later patches allow you to pick up where you left off. You’re still limited to credits, and the practice mode definitely helps on later stages. The Xbox 360 version allows infinite credits.

Overall, it’s definitely one of the most notable doujin shooters to come out, and apparently some publishers over in Japan felt so too. Its second permutation, Trouble Witches AC, runs on the Taito X2 hardware and adds in a two player simultaneous mode. The XBLA version adds in widescreen mode and changes some of the backgrounds to 3D objects (like the train in the first level), making it look quite sleek. However, the original Arcade mode is still playable. Studio SiestA also had vague plans to release the PC version to English speakers under the weird title “Tomboyish Witches”. However, they only released a few screens and an English version of the manual.