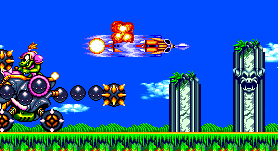 The Genesis version of Sparkster is a completely different animal than either of its brethren. This version was directed by Yasushi Takano, an artist who worked on the original Rocket Knight Adventures. 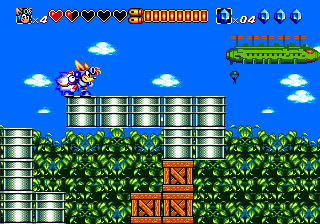 First off, the controls have been changed – instead of holding down the attack button to charge your jetpack, it fills automatically, and is activated with the “A” button. The meter also refills pretty quickly, allowing you to boost multiple times before you hit the ground. If you want a few extra seconds, the rocket will also charge a second time, allowing Sparkster to spin when he flies. This is vital for certain bosses, where you need to use the spin attack to unscrew them, bit by bit. There’s a greater degree of aerial control overall, since you’re not chaotically flailing around so often. Unfortunately, the rest of the controls have been run through the mud.

Sparkster no longer shoots flames from his sword, and his regular sword swing attack is pitifully sluggish. The rocket boost isn’t as fast nor as powerful, and even his regular walking speed has been slowed down. Much like the SNES game, the level designs in the Genesis version have been expanded to allow better use the jetpack, although they’re not nearly as involving as either game. 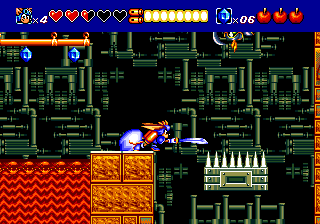 There are still jewels scattered through the stage – when you grab 10, a little roulette wheel will play in the corner and give you a power-up based on what it rolls. However, there’s an extra incentive for exploring each of the levels, as most of them have a hidden sword. Finding all of them before the end of the game will make the final segments much easier, as you morph into the powerful Golden Sparkster. Like the Chaos Emeralds in Sonic, you also need to find them all to get the good ending.

Once again, Sparkster has been completely redrawn and looks a bit cuter than he does in the other versions. There aren’t as many impressive effects as Rocket Knight Adventures, but the graphics are much cleaner overall. The bad guys this time are lizards and dinosaurs, which aren’t quite as interesting as the pigs or wolves. The shooter stages are gone, replaced with sections where you control Sparkster’s giant robot and run through the lizard city, although the level is far too long and grows a bit dull. There’s also a brief prologue section right before the game begins, where you need to duel against Axel in the robots, similar to the face off near the end of the first game. The music can’t quite stand up to the SNES version, although they do share some songs with each other, primarily Sparkster‘s main theme. 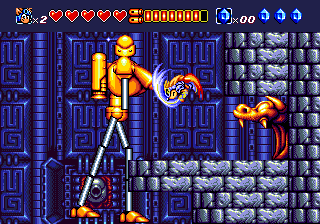 The sluggish controls definitely hamper the game, and it just doesn’t doesn’t have the same sense of speed. Still, it’s not a bad title, just one that’s strangely different from its peers.