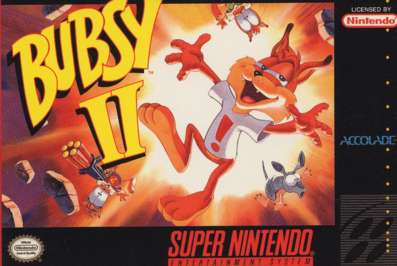 Even though Fractured Furry Tales was technically the second Bubsy game, barely anyone owned a Jaguar, so this Genesis/SNES/Game Boy follow-up was determined to be the true sequel. 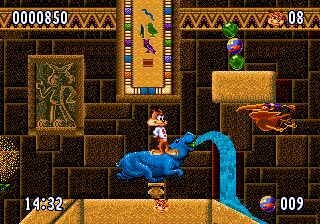 And they actually “fixed” the controls in Bubsy II, and by “fixed”, that means “made slightly less worse.” Bubsy doesn’t haphazardly fly forward like he did in the previous games, but something about the gravity and physics still doesn’t feel right. Hell, it’s even more annoying in the outer space level, where your jumps are intentionally screwed up. At least they did away with the one-hit kills, so the game is far less frustrating than the others. You’re also given the choice to select your levels, which include Egyptian, Musical, Medieval, and Outer Space themed levels, as well as a few flying stages. The bad guys this time are a bunch of evil pigs, but there’s a wider variety of strange enemies, like evil sheep and bouncing boars. Bubsy can also now attack with a NERF gun, although like the rest of the game, it’s a bit unwieldy. 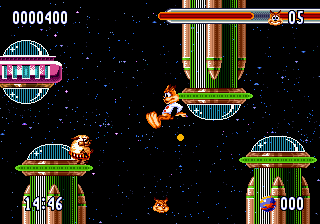 New to Bubsy II is a two player mode, where a second player can control one of Bubsy’s younger relatives, to collect orbs or attack enemies. There are also a few mini-games, where you can launch frogs at various targets (similar to those carnival games), or play as Bubsy’s armadillo friend as he makes his way through the inner workings of a moving truck. It’s nothing outstanding, but it at least shows the developers were putting some effort into a well-rounded package. 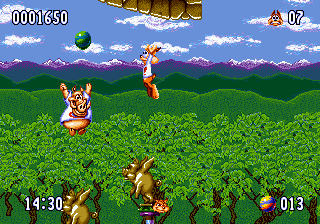 Overall, Bubsy II is definitely an improvement, mostly because you’re not dying every five seconds, but the designers simply cranked the dial up from “pile of junk” to “terribly mediocre”. Once again, the SNES and Genesis versions are practically identical, although Accolade developed a Game Boy version as well. The controls are even more slippery than usual, and the levels that weren’t cut out (the Outer Space and Medieval levels) have been redesigned entirely. It’s also a bit weird that the sprites are light colored against a dark background, which seems reversed from most B&W Game Boy games. 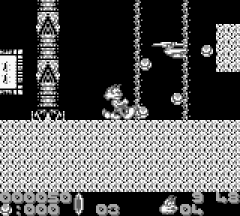