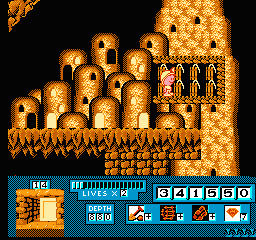 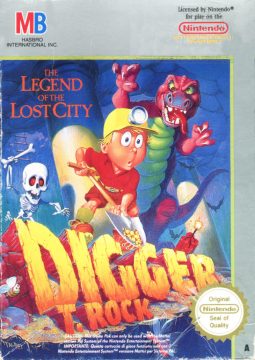 Rare made several games for the NES that are being remembered to this day, such as R.C. Pro-Am, Wizards & Warriors or the infamous Battletoads, but there’s a game that has been mostly forgotten and has never received any real acclaim. That game is Digger T. Rock: The Legend of the Lost City.

Basically Digger is a platformer which is somewhat like the lovechild of Boulder Dash and Spelunker: just like in the former, Digger must travel through a series of caves by excavating with his shovel through terrain in order to pick up diamonds, while trying not to displace boulders and get crushed by them or cause cave-ins. Falling from a height stuns and causes damage to Digger, who is weak like the Spelunker dude and has to find and deploy ladders in order to not lose one of his three starting lives if he falls down too much. There’s also the risk of getting caught in the blast radius of the dynamite bundles he can use to destroy certain walls, and numerous enemies roaming the caves, from giant mosquitoes to stronger foes like bone-throwing skeletons, invincible ghosts and cavemen with clubs the deeper Digger, well, digs towards the fabled Lost City. 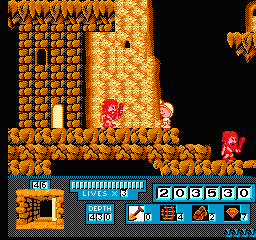 Digger has to escape from a cave to get to the one below it, but finding the exit is not enough: he has first to find and stand on a pillar that will open said exit, however he has only a minute of time before the heavy door closes, forcing him to go back to the pillar. Easier said than done: there is no level map, most enemies are constantly respawning and relentless in Digger’s pursuit and most exits are guarded by a dinosaur that will make short work of the explorer if he’s not careful.

An important part of the gameplay are the diamonds that can be found somewhere in the caves: not only they give lots of points for the high score, but they also can be deployed like every other item. Putting them in front of the dinosaur will distract it, giving Digger the opportunity to kill it. Combat is kind of cumbersome, since Digger can only attack with his shovel (when enemies are near him) or by throwing rocks that he can pick up from the ground or by hitting the cave’s ceiling. To defeat the dinosaur it’s better to blow it up with the dynamite, but there’s always the problem of being caught in the explosion. Diamonds can also be used in two of the caves to buy items from an unseen caveman shopkeeper. 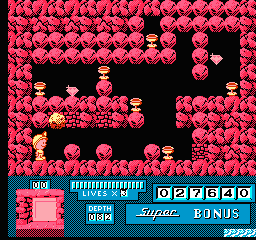 The only way to gain extra lives is to complete the mini-game at the end of each stage where Digger has to pick up every goblet in a very short amount of time, still having to avoid the falling boulders. If he manages to reach the exit in a short enough time (there are also several shortcuts and fake walls in the levels), there will be a couple diamonds among the goblets as well. You’ll need the extra lives since there’s no continues or passwords to return to the cave you’ve reached, unless you use a cheat code.

The presentation is very bare-bones even for a 1990 game: there are no options besides the title in the starting screen, the graphic tiles for the eight caves are more or less all the same just in different colors, with only darkness as background; the sprites are barely animated, the color choice is terrible (with pink boulders and dinosaurs) and there are no intermissions or cut-scenes besides the brief ending cinema. Digger himself is one of Rare’s most uninteresting characters: only Cooper from Grabbed By The Ghoulies is as bland and generic as him. His only defining trait is that in-game he looks like Charlie Brown dressed as an explorer. The only interesting thing is the morbid touch where he crumbles into dust whenever he loses a life, leaving his helmet behind. On the other hand, the soundtrack is good, even if for most of the time you will hear the tense music that starts whenever Digger activates the door’s opening mechanism, which is vaguely unnerving and makes finding said door even more of a hassle. 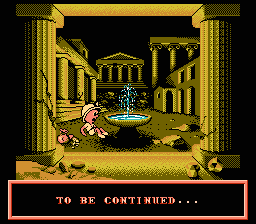 In the ending cinema Digger finally finds the Lost City, but then something happens that makes him worried: we’ll never know what was going to happen, since the classic “To Be Continued…” was never followed by another game, or even the promise of the explorer’s return. The only time Digger has ever resurfaced from the depths was in 2015, when Rare published for the XBOX One Rare Replay, a collection of 30 games from their whole history since they were called Ultimate Play The Game. Otherwise he’s just a failed mascot who didn’t even manage to get mocked by Conker.