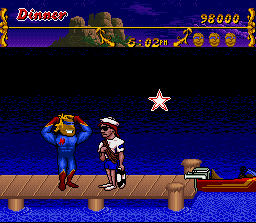 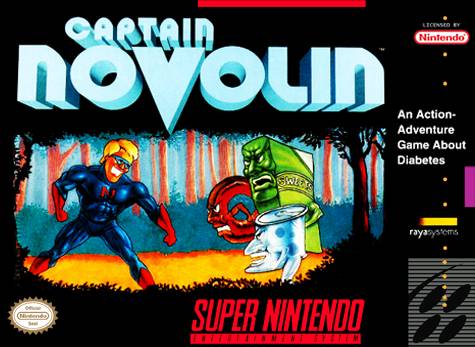 Education and gaming are both fun in their own right, although I’m sure there are few of you who would disagree with me on that point. However, sometimes these two entertaining activities mix and create some of the most abhorred creations known to man. It’s sort of like trying to dip Oreos into ranch dressing – while both are good food, they do not necessarily compliment each other’s flavor. History, with few exceptions (such as Liberty or Death for you SRPG aficionados out there), teaches us that these two activities combine to create, at best, a horrifying mutant that should never have been conceived, and at worst, Captain Novolin.

This turd-riffic game was published in 1992 for the Super Nintendo by a company called Raya Systems, and developed by Sculptured Software. Most people will tell you that its intention was to educate children about diabetes through a platform-esque game. After thorough examination of the game, I can tell you that this is most certainly not the case. Captain Novolin‘s original purpose was to take facts about diabetes that any fool could learn from a quick chat with a doctor, combine it with the main programmer’s napkin doodles of his acid trip, and sell it to unsuspecting children for 60 bucks a pop. That’s right, Captain Novolin retailed for 60 goddamn buckaroos. You’d think Nintendo would have some kind of quality control to prevent things like this from happening, but they still allow That’s So Raven games to be released and probably lose no sleep over it. Bastards.

So, knowing this about the game, I’m sure you’re just jonesin’ to know the intricacies of the plot, right? Well, it’s not like you have a choice, because here it comes. Captain Novolin begins with the titular diabetic superhero enjoying his morning treadmill run when an urgent news flash hits his Disaster-o-com. Apparently, Mayor Gooden of Pineville has been kidnapped by a bunch of aliens led by an enigmatic figure named Blubberman. These aliens are also rampaging through the streets of Pineville dressed as candy and junk food. Apparently this is some kind of threat, I suppose, because Pineville is host to more than 50% of the world’s diabetic populous. Never mind that the aliens just kind of jump and/or run in very predictable patterns to the left. But I digress. The aliens have made their hideout in Mt. Wayupthar. Mayor Gooden only has enough diabetes supplies to last 48 hours, and as Captain Novolin, it’s your job to save him. Nothing deviating from the “save the damsel in distress” story, but if you expected an RPG-esque plot out of this, then, well, I just don’t know what to tell you. 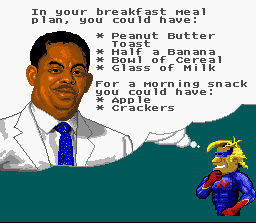 The gameplay is where this abomination really takes off. Before you actually start the game, hideous 16-bit doctors (whom bear vague resemblances to a fat Will Smith and a young Joan Rivers) give you advice concerning your diet, insulin, and so on. Occasionally there will be a screen requiring you to match a color on a bottle thing. Apparently, this represents your blood sugar level. If you fail to match the color correctly, the game chastises you by making a loud “HONK” sound. There is no real penalty for not matching the colors, but I suppose the sound would piss off your roommates if played in rapid succession. There is also the scene showing a badly-drawn hypodermic needle – in this scene you must press down on the control pad to proceed. That’s it. If you don’t have the time to read this crap, this pre-game scene can be skipped rather quickly by holding Down and pressing A really fast.

Don’t get excited yet, boys and girls. We haven’t even gotten to the actual game. After the aforementioned scene is finished, you actually start the game. It’s a fairly typical platform game. All there really is to do is run right and stomp the occasional anthropomorphic sugary food item. You can move, duck, and jump. Nothing else. If you happen to jump in a direction other than just straight up, Captain Novolin will do a poorly animated somersault accompanied by a hilarious noise that I can only describe as “BWEEEUU.” If you wish to do this really fast, hold Down/Right or Left and A at the same time. It serves no real purpose, but the noise plays a lot. 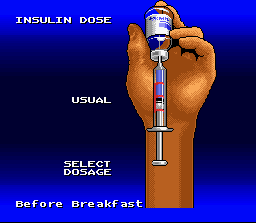 Strewn about the levels are really little food items. Only get one of each of these, no more, no less. It’s basically doing what the Will Smith doctor tells you to. If you happen to eat more than one of any of these, it’s no big deal – just eat one less of some other food item. If you eat more than recommended, however, you will keel over and die at a later checkpoint. None of the diabetics I know of have this problem, but I guess Captain Novolin is a severe case. Hell, he’s diabetic to the point where you have to press Down above an enemy to actually kill them. If you forget to do this, he’ll just fall into them and get hurt. The good thing about this is that you don’t really have to be directly over an enemy while pressing Down – even if you’re just in front of them, you will still somehow kill them. Programming at its best. Also in the levels are little stars that give you various tips about managing your diabetes. If you happen to remember these tips by the end of the level, you will get extra points for entering them into a trivia thing. If you’re a loser and have played the game as many times as I have, you may not need the stars to know the answers.

The graphics are horrible, to put it lightly. This is one of the few cases I can think of where 8-bit graphics are superior. Sure, they’re less detailed, but at least they wouldn’t be intricate to the point where looking at any object on the screen pisses you off, like in this game. Everything is so badly drawn it’s funny. The music and sound are also horrible, and compliment the game’s graphics very nicely. 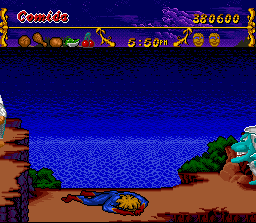 There’s almost nothing to the game. Only on the third to last level do you come across an actual bottomless pit. Everything before then is completely flat with no obstacles whatsoever. The only real challenge I had with the game was eating the correct amount of food and figuring out that I had to press Down after jumping to actually kill an enemy. The closest thing to real variety in gameplay are the boat levels, and even those are exactly the same as the land levels. The only difference there is the sound you make when you jump. Once you know how to kill enemies and eat food, the game can be beaten in under ten minutes. This isn’t necessarily a flaw on the game’s part – in fact, I guess this was some kind of mercy on Raya Systems’ part. As some kind of replay value, you can select from English, Spanish or French languages, or try to beat my high score: 1,204,700.

So why play Captain Novolin if it’s so bad? Because it’s fucking hilarious. This is basically the game equivalent of a movie like Judge Dredd or Breakin’ 2: Electric Boogaloo. It’s so bad that it’s really, really funny. Between the stupid sound effects and the quote, “Tengo Diabetes”, Captain Novolin is hard not to laugh at. That’s the only justifiable reason to play it. If you actually plan to purchase this thing, pay no more than a dollar. Seriously. 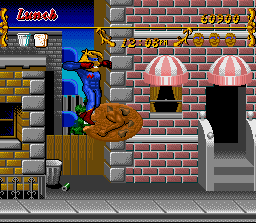 Because Raya Systems seemed hell-bent on ruining gamers’ lives, they later released several other educational games. These are Packy & Marlon, a game about two diabetic elephants trying to recover their diabetes supplies from asshole mice, Bronkie the Bronchiasaurus, a game starring a bronchiasaurus that has asthma, and Rex Ronan: Experimental Surgeon, a more serious toned game about the dangers of cigarettes. Of these three I have played the first two. Unlike Captain Novolin, they more closely resemble good platform games, but that doesn’t make them any more enjoyable. Not only are they boring when compared to the flamboyant shittiness of Captain Novolin, they also feature sprawling Super Mario World-esque maps. That means that the far-below-average platforming action can take much, much longer than ten minutes, which is also far longer than I ever plan to spend playing them. I cannot comment on Rex Ronan as I haven’t played it, but I’m sure it’s just as awful. Really, if you’ve played Captain Novolin, you’ve played Raya Systems’ closest thing to an enjoyable game. Don’t bother with these.

Links:
EGM’s Worst Games of All Time By the legendary Seanbaby. Captain Novolin is #4.