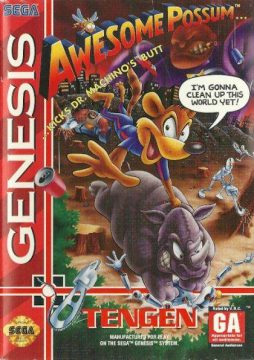 Awesome Possum was Tengen’s entry in the then burgeoning bandwagon of mascot platform games that really, really wanted to be Sonic the Hedgehog. He’s a sarcastic, tracksuit wearing possum with a strangely tacked-on environmentalist slant. As a character, he feels a lot more fleshed out than most of his mascot brethren, thanks largely to the massive (by 1993 standards) amount of speech samples available in the game. He’d complain when hit, brag when killing an enemy, announce when getting a 1-up, chastise the player for not moving, and repeatedly point out how cool he is. His personality wasn’t much to write home about, but at least he had a personality, which was more than you could say about the likes of Rocky Rodent or Zero the Kamikaze Squirrel.

The downside of this: HE NEVER SHUTS UP!

Mercifully, you can disable speech in the options menu, but doing so removes the only competently designed part of the whole game. As a platformer, “Awesome Possum… Kicks Dr. Machino’s Butt” (and yes, that really is the full title) is an absolute train wreck.

Awesome flings himself around the screen at unmanageable speeds in a desperate bid to further copy Sonic, but without the benefit of Sonic’s level design. It’s not uncommon to run into the same stationary obstacle multiple times, even less common to find yourself running full throttle into enemies you never saw coming from multiple directions. All three buttons jump, also just like Sonic, but in order to kill any of the enemies, you need to land on top of them. Good luck with that, especially against anything positioned even sightly above you, or anything that moves for that matter. Powerups exist that boost your speed or jumping ability, so naturally, you’re going to want to avoid them like the plague, lest you wish to be flung around the level like a pinball even more than you already are.

Levels themselves are just a mishmash of things that look as if they’re supposed to be in a platform game, but there’s no rhyme or reason to any of it. Platforms, powerups and enemies litter the place with little or no thought as to how to pull them all together. At best, it makes no sense, at worst, you’ll get stuck in one of many choke points, where the only way forward is straight through a gauntlet of pain. The appearance of checkpoints is equally random. Sometimes they’ll be literally seconds away from one another. Apart from bad design, there’s bad programming to go with it. The game runs at a framerate that ought to be ashamed of itself, hit detection is a best guess, and anything that moves will inevitably find itself clipping through walls at one point or another, sometimes getting stuck and necessitating a reset. The music is also a mess.

What makes Awesome Possum a truly surreal experience, however, is the bizarre grafting of environmental issues onto the game. The equivalent to Sonic’s rings in this game are recyclable bits of trash like bottles, cans and newspapers, and different stages of the game represent different environmental issues; the rainforest, the ocean, the Arctic circle, and a massive landfill, respectively. (At least there’s no mine cart level.) Between each stage, for seemingly no reason, you’ll be confronted with a multiple choice question about some environmental factoid. Get it wrong, and nothing happens. Get it right, and you earn bonus points, but since points never actually amount to anything remotely beneficial, it’s about as good as if nothing happened, unless you were just dying to know how long blue whales could hold their breath. Driving the point home that the environment is important, the game over screen is the stuff nightmares are made of.