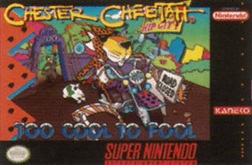 Chester Cheetah, the Cheetos-loving cool cat, was something of a product of the nineties. Cool shades? Attitude? You got it! His presence in video games made total sense at the time, in Chester Cheetah: Too Cool To Fool, for the SNES and Genesis. As expected, it’s a slapped together 2D platformer, made by people with little grasp on how such diabolical creations actually function. It was developed by Kaneko, also known for the infamously porny Gals Panic arcade games, among other oddities.

The story fills in some much needed backstory to the blight of Chester Cheetah, as his motorbike has been stolen by Mean Eugune, a manaical zoo keeper. Eugene’s plan is for Chester to never escape his zoo confinements, so it’s off to find each of the five hidden pieces, usually hidden poorly in each stage. Sounds simple enough, but standing in your way are boxing kangaroos, endless mines, helicopters, and for some reason, sentient springs.

Much of the game consists of walking forward, dashing, and jumping over things, a tried-and-true mechanic that nonetheless feels frustrating and tedious due to the crappy hit detection. You only have a single life and three continues, though you can take five hits before you expire. It’s not entirely dreadful in the way that, say, Awesome Possum is, but the game clearly has no better ambition than letting children live out their fantasy of playing a food commercial. His life meter even consists of cheese paws, which were a product that were actually sold, at one point. To be fair, the graphics actually are quite colorful and have a bit of personality, even though Chester himself is awkwardly shaped.

The game does have a noteable obsession/fetish with sunglasses. Everything (sans Eugene and his dog) are wearing them. Even the rocks in the background have them, and by all rights, they shouldn’t even have eyes. There’s even a sunglasses power-up, which is remarkably redundant, seeing how Chester already has a pair on. Instead of causing our hero to stumble around in darkness caused by wearing two pair of sunglasses, it causes hidden items to appear. Throughout the levels you’ll see coin-like paw icons. These icons don’t grant any real rewards beyond giving you extra post-level points. The requisite invincibility item is an electric guitar, with one major snag – you can’t actually control your character when invincible. Instead Chester does a “totally wicked guitar solo” while prancing and dancing around, forwards and backwards before returning to the original spot. What an outrageous dude! There is, of course, one guitar precariously positioned by a ledge, which will send dear Chester rocking and partying to his doom. 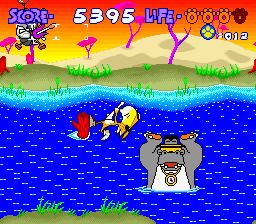 At the end, there’s another commercial of sorts. No, not for Cheetos, because that’s obviously the whole game. Instead, Eugene gets away and sets up the sequel, which, regrettably, exists. Chester Cheetah: Wild Wild Quest was released not long after, and really isn’t any better.